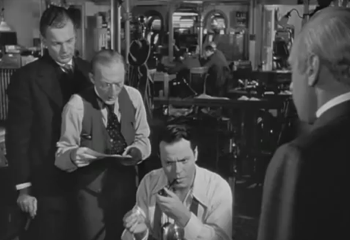 It's worth trying to attach a memorable image or immersive experience to the lessons I would have taught anyway -- just in case.

Every semester I conduct a small experiment with the undergrads in my Journalism in the 21st Century course. On the day devoted to discussing media consumption, they walk into class and I ask for their cell phones. They blink, then laugh, then gape as I collect their phones and pile them in a corner behind me.

They’re not allowed to use cell phones during class, so it really shouldn’t matter where the handsets are for the next hour and 15 minutes. Yet I can tell with every furtive corner-ward glance (to say nothing of the twitching if one of the phones beeps or buzzes), that students are in serious tech-withdrawal.

The best part is, they can tell too.

Yes, they also study Pew Research Center data chronicling Americans’ news habits, and they log their own habits for self-study and comparison. They even read about some of the neuroscience behind the brain’s dependence on info gadgets. But my hope is that the in-class experiment is visceral enough to help cement the lesson.

As a college educator in the 21st century, I am always trying to think visceral. We know that students increasingly crave stimulation, surprise and interactivity, but we deliberately push against the current. We think students benefit by being forced to focus on something — anything — that isn’t byte-sized. We think we are lowering our academic standards if we cater to ever-shrinking attention spans.

In many ways, we are right.

But we’re also kidding ourselves if we don’t acknowledge the changing needs and habits of our target audience. They might engage enough to pass the class, but I worry about what stays with them once the semester is over. It’s worth trying to attach a memorable image or immersive experience to the lessons I would have taught anyway — just in case.

Here are some things worth trying:

Thinking visceral usually involves teaching visual. There was a time when this meant composing a PowerPoint presentation. It’s graphic. It’s colorful. Sometimes it’s even animated, if you can figure out how to swoop text around. But today’s students are so inured to stimulants that it is simply their version of a chalkboard: two-dimensional, text-heavy and often boring.

You can try spicing up your PowerPoint presentations, or you can try a different visual route altogether.

I have journalism students read scholarly work by sociologist Manual Castells about the shifting powers of communication in what he calls the “Network Society.” We then talk in class about the vertical structure of top-down, Industrial Age mass media and the horizontal structure of today’s all-access, Information Age media. I could (and I have) used PowerPoint to highlight Castells’ main themes. But I have better success illustrating them through a series of short scenes from journalism-related shows and films, culled from YouTube and DVDs.

We start with Charles Foster Kane in his newsroom in “Citizen Kane,” then move onto Bob Woodward chasing down a lead in “All the President’s Men” (the scene I show is described here), then news staffers gathering for a grim announcement in the last season of HBO’s “The Wire.” If there’s time, I squeeze in a short clip from the 2009 film “State of Play.” After each one, I ask students: Is this depicting a vertical communication system, a horizontal system, or some convergence of the two? Who holds the power in this system? What is their pursuit?

Such scenes help crystallize the power shift I am trying to track, and become quick reference points as students process the idea that they have unprecedented power and responsibility in the Network Society.

I try a similar approach when we get to the resurgence of partisan journalism. Students often say they don’t understand how the opinionated bluster of a Bill O’Reilly or a Keith Olbermann can draw large audiences. This time, I go for the visceral first by having them watch some video clips for homework. I choose a “straight” news interview with a direct participant in the story, a commentary on the issue by a conservative media figure, and another one by a liberal counterpart. The more bluster the better.

The next day in class, I have students quickly say what they remember from the clips. Almost always, the memories are of the commentators’ name-calling or insults. (When I did this once with the proposed Islamic Center in lower Manhattan, only one student recalled the dry but informative CNN interview with the center’s own imam, but only to point out anchor Soledad O’Brien’s “rude” interruptions.)

In this way, students live the lesson before they study it. When they then read research on higher retention of opinionated versus straight news, they can’t question why people gravitate toward an O’Reilly type, because they’ve done it themselves.

Teaching visual doesn’t just mean bringing multimedia into the classroom. We have the opportunity to bring students into the subject matter because we are studying a living, breathing profession. I can almost hear the jokes about life support or breathing tubes, and I understand. Yes, newspapers are contracting and in some cities shuttering, but the number and variety of media companies have only grown in the digital age. Students have more to study than ever before. Plus, we have two advantages when trying to arrange such field trips: Journalists usually are happy to evangelize to future generations, and they happen to already believe in the concept of transparency.

And in any case, it doesn’t have to be limited to media businesses. My students tour The New York Times every semester, but they also see the CUNY Graduate School of Journalism. They see grad students, high-tech equipment, and professors whose work they have read for class. It’s just the right blend of the familiar and the aspirational.

If part of your plan is to teach students that they have unprecedented power in today’s media world, then let them feel the weight of that power.

Many journalism graduate schools are doing a great job of incorporating business education and entrepreneurship into their programs. Why not give undergrads an early taste? Have students formulate business plans for their own media companies, then pitch their ideas as if their classmates are investors. With the Knight News Challenge and other start-up funding out there, you never know what kind of initiative this will spark in students.

For more advanced students, why not have them cultivate a real product? Using a San Francisco State University course as a model, I have students create a WordPress blog on a topic of their choosing, then spend the semester posting text, photos, audio, video, mapping and other digital content to their site. They must market their blogs through social media, and track their success through web analytics. They are free to continue or disable the blogs after the semester is over, but at least they have a practice run at managing their own journalistic content.

Again, these ideas are meant to supplement, not replace, the lesson plans of any journalism or media course. I don’t want my students to simply pass my class. I want them to think differently about the way they produce and consume media in their own lives. If that means pushing more visceral experiments and experiences into the class calendar, it’s worth it.