How a Novelist Bypassed His Publisher and Raised $11,000 on Kickstarter 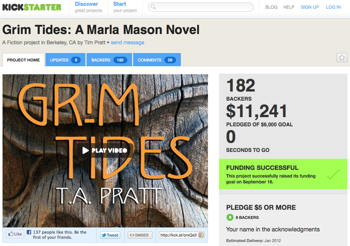 Tim Pratt's Kickstarter campaign raised more than $11,000 so he could self-publish his novel

The advantage with Kickstarter is that it's an advance. You get everything at once, rather than waiting for it to trickle in." -Tim Pratt
ADVERTISEMENT
Click here to read the whole series

Tim Pratt was confident enough that his publisher would print a fifth novel in his urban fantasy series that he ended the fourth one on a cliffhanger.

“Not a complete cliff hanger,” he told me in a phone interview. “I essentially tied up the story in the novel. But I left a number of questions unanswered that I wanted to answer later in the series.”

The fourth book, “Spell Games,” was published in Spring 2009, however, right after “this little economic apocalypse,” as Pratt put it — one that led to massive layoffs in the New York publishing industry. His editor, who had been with him since the first Marla Mason book had been published in 2007, did not escape the chopping block, and Pratt found his work reassigned to another editor who “was good, but not particularly interested in my series.” Though his books always had decent sales, he remained firmly in the mid-list, and Random House decided not to renew his contract.

“It was understandable,” Pratt said. “Those were dark times. A lot of people were not getting contracts picked up again. A lot of series were never finished. A lot of people who had books bought were at the copyediting stage when they had their contracts cancelled, whose books weren’t published at all. My feelings weren’t particularly hurt, though it was a difficult financial situation at the time. However, the feelings of my fans were extremely hurt.”

It’s not surprising that after thousands of people had paid money and invested hours of reading to follow the travails of Pratt’s characters that it would result in at least some desire for closure in the series. In the months following the publication of his fourth book, Pratt began receiving letters and emails from increasingly disgruntled fans wondering if another publisher would pick it up. But given the industrywide contraction in the book world, few publishers would have been interested in signing on in the middle of a series, much less one that only had moderate sales. Pratt was left with a fan base and seemingly no way to serve them, and he likely would have just moved on to other projects if his wife hadn’t been laid off from her job.

Eventually, Pratt worked out a way to connect with his fan base and get funding directly from them, with donations and a Kickstarter campaign that kept his series alive.

I’ve been intermittently following Pratt’s career since I first read a reprint of one of his short stories in college. The writer has never been shy about sharing stories of his financial troubles on his blog, and there have been several incidents over the last few years in which his economic situation has been dire. Not long ago, Pratt and his wife had a child, and the layoff came as they were facing mounting bills due to their son’s chronic medical conditions. The novelist had been kicking around an idea for a prequel novella to his Marla Mason series, and after unsuccessfully shopping it around to a few small presses, decided to serialize it for free online.

The model was simple: Pratt would put up a new chapter each week, asking his readers to chip in what they could in donations. Friends in the writing community rallied around him and he ended up raising about $4,000, which is likely more than he would have received from a small press for the novella.

“When people started asking me if I’d write a fifth book in the series and pick up where that cliffhanger left off, it occurred to me that I could try to do the same thing,” Pratt told me. “So in 2010 I thought it’d be a good idea, but this time I decided to offer fundraiser prizes, a kind of NPR model; if you give this amount, you’ll be able to get this cool thing — chapbooks, bookmarks, signed copies. For a few hundred dollars you could get the name of your choice included as a character in the book.”

This time, Pratt brought in around $13,000 in donations. What’s more, after he finished serializing the book, he not only put it up on the Kindle store and began selling it for $4.99, but he also sold the audio rights to Audible. Altogether, he said, the book ended up bringing in more money than it would have with his traditional publisher.

But though the experiment was successful, Pratt acknowledged he’d taken on a substantial amount of risk. Once he started serializing the novel, he would have been obligated to finish writing it even if the donations had petered out. With a project as large as a novel, that’s a lot of work to do for potentially little pay. And so as he began to mull over writing a sixth book in the series, he turned to Kickstarter as a possible solution to this dilemma.

“The advantage with Kickstarter is that it’s an advance,” he said. “You get everything at once, rather than waiting for it to trickle in. And you can tell in advance whether it’s worthwhile. You can put it out there and say if the fans are interested enough to pay me to do it, then I know it’s worthwhile — whereas if I just put it out there there’s a chance people won’t care anymore, that it’ll have been too long, that the fans will have moved on, or whatever.”

And so in August of this year, Pratt uploaded his project onto Kickstarter with video and text explaining his goal. Like before, he offered a series of prizes: For $5 you could get your name in the acknowledgments; for $10, a bookmark; for $50, “a signed limited-edition chapbook featuring a new Marla Mason story”; for $75, “a signed trade paperback” of the novel; all the way up to $2,000, which would result in Pratt writing a “Marla Mason short story just for you, featuring any supporting character of your choice, to be produced in a signed chapbook limited edition of a single copy.”

By this point, Pratt had already serialized two Marla Mason books and had received a fair amount of fan mail for the first four books. Altogether, he had collected several hundred email addresses from fans in the series, and so when he announced the Kickstarter project he sent out a note promoting it to this group. Kickstarter also pushed the project to its front page and tweeted it out to its followers, resulting in donations from people who weren’t even fans of the series. In only 13 hours, he’d met his fundraising goal of $6,000, and by the time the project closed, it was up to over $11,000.

Because the serialization doesn’t start until January 2012, he plans to have the novel finished before sending out the first weekly chapter. This means he could start selling the e-book on the Kindle and Nook stores on day one. “I might put it up for sale early and say, ‘If you want to read it for free, it’s here, it’s serialized. A new chapter will come out every Monday. But if you’re just dying to go and read it now, just give me $5 and get it on the Kindle.” And because he’s already made $11,000 from Kickstarter, whatever sales come from the e-book will be an added bonus from day one.

But lest you assume Pratt has figured out a way to shrug off the mores of the traditional publishing industry, consider this: The $11,000 he raised came from only 182 people. That’s a fairly small number of fans to trust your career to. (Wired co-founder Kevin Kelly, who famously posited that any artist only needs a thousand true fans to flourish, would disagree.) Pratt also told me that he likely wouldn’t have received all those donations if Random House hadn’t built up that fan base for the series. When he tried to serialize a kids novel he’d written, Pratt didn’t even break four figures.

“I know with this series there are people who want to see it going,” he said. “I would wonder if I wrote an entirely new standalone fantasy if I would get this kind of response. And that’s OK, because I want to do 10 or 15 books in this series. I’m happy to still be writing it. I would have been thrilled if Random House had kept doing it, but if I had to go entirely the self-publishing route, I would hesitate to find the time to write something not in this series and try to serialize it.”

In other words, even though authors like Amanda Hocking and J. A. Konrath are receiving press for selling thousands of e-books a month without the help of New York publishers, Pratt isn’t ready to abandon traditional publishing just yet.

“A lot of people think that if they start writing their first novel and no publishers are interested then they’re just going to put it on the Kindle for 99 cents and become millionaires. The people who are becoming millionaires are outliers,” Pratt said. “If I were starting from nowhere and I didn’t have a big publisher grow my audience, I don’t think anyone would care. I don’t think my Kickstarter would have done that well. So I can see where they’re coming from and understand the frustration; a few years ago I was trying desperately to get any publisher to look at my novels too. But I worry that reality is not going to conform to their wishes.”

Simon Owens is the director of PR at JESS3, a creative agency in Washington, D.C. You can read his blog, follow him on Twitter, or email him at [email protected]