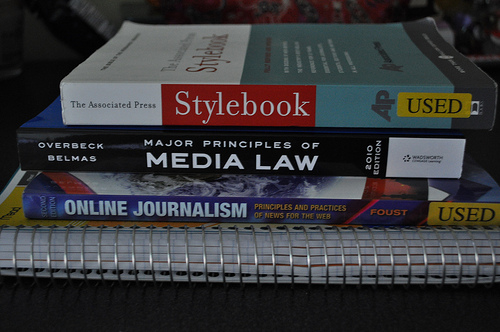 Rachele Kanigel had two thoughts when she started reading about the journalistic potential of Google+, the new social-networking program that just might push onto Facebook’s turf. The first: “This academic year, everyone is going to discover Google+ and student newsrooms are going to be doing a lot with it.” The second: “Darn.”

Kanigel, a journalism professor at San Francisco State University, is the author of The Student Newspaper Survival Guide, a 180-page book that helps students and faculty through the process of building and maintaining a strong student press. The book sold so well after it was published in 2006 that a second edition was warranted, so she spent a year researching and writing updates. She submitted her manuscript in October 2010, and the book is set to publish next month.

The safest path is to focus on journalism concepts and values rather than specific equipment or providers, even when something looks like a sure thing.

The new edition allowed Kanigel to recast much of the book for today’s digital, mobile communications world. She rewrote the chapter about student media websites. She added chapters about multimedia and social media, including mentions of innovations that weren’t yet ubiquitous in 2006, such as Twitter and smartphones. She changed outdated references like “the Facebook,” which is how the site was known in its infancy. But her deadline was just a bit too early for Google+.

Such is the delicate calculus for anyone who writes journalism education books that are aimed for the shelves and not the Internet. Like most instructional books, college guides and textbooks can take years to research and write, then another year to edit, design, lay out and publish. A one-year turnaround between writing and publication is no big deal if the subject is history or literature, but it is a lifetime in today’s fast-changing media landscape, and it means books can sometimes seem outdated almost as soon as they hit the market.

“It’s unavoidable,” said Mark Briggs, author of the digital journalism textbook JournalismNext, which was published in late 2009 and is already in need of an update. “Things are changing even while you’re writing it. If it’s that fast, if you can’t even write the book fast enough, you know things are going to be changing if the book is going to be out there for two or three years.”

Briggs called the long months between writing and publication a time “to agonize and sweat” over what will emerge and fade in journalism. And he is relatively lucky. His publisher, CQ Press, sensing the quick-change pace of the industry, took JournalismNext from final manuscript to publication in five months.

His next textbook, Entrepreneurial Journalism, is on the same fast track and is set to publish in October. College journalism programs are increasingly adding business education to their curricula, as blogs and other startups muscle in on legacy media, so the book was a natural. But tracking innovations in this emerging field, and the companies behind them, proved even more difficult than writing about digital journalism. As things kept changing in the world of entrepreneurial journalism, so too did Briggs’ outline, chapter order, features and other elements.

“Startups that seemed promising when I first started writing, some of them aren’t around anymore or don’t seem as promising as they once did. Others have popped up,” Briggs said. “At some point you have to say, ‘That’s it. Ship it’ — and hope for the best.”

Authors and publishers have tried to meet the challenge in a couple ways. They either keep the content as general as possible, sticking to the fundamentals and avoiding references to specific equipment or programs (woe betide any textbook that still notes MySpace’s clout), or they offer online modules that allow for faster updates and more interactivity. But the first approach is a challenge when new tools actually change some of the fundamentals, as Twitter has done and Google+ might, and the second is still just a side dish for the paper entrée.

Either way, the print textbook still dominates for now. College students have been slow to embrace e-textbooks. A Kindle might work well for commercial books read in a linear, text-centric fashion, but it doesn’t offer the interactivity, flexibility or graphic quality that a student often needs from an instructional book. And although blog articles and online tutorials are increasingly common and necessary in journalism classes, many professors still trust a textbook to anchor their syllabus and provide a one-stop, comprehensive collection of information. (My digital journalism students have plenty of online readings, for example, but they also like having JournalismNext at their fingertips.)

With that in mind, the approach of CQ Press, which only entered the journalism textbook market about eight years ago, is to choose its book projects carefully and keep prices in line with the ephemeral nature of the subject matter. JournalismNext costs $23.95, and Entrepreneurial Journalism will be $22.95 — a pittance considering the average college student spends more than $1,000 a year on textbooks. Both resemble a commercial paperback in size and length, and neither has an online module.

Charisse Kiino, who handles the journalism titles in the company’s college publishing division, said CQ’s newcomer status is actually an advantage, because most of its projects have been conceived in the new media era. “Other houses have books that were written when print was it, so they’re trying to retool legacy media books” by tacking on components about digital communication. “Sometimes you just have to start all over.”

When considering book proposals, “those are the kinds of projects I’m looking for, people who are innovating in their own classroom and are already in that mindset because I know they’re going to have the ability to revise and rethink and retool their books over time to really match what’s going on in the industry,” Kiino said.

Mindy McAdams, a journalism professor at the University of Florida and creator of the blog Teaching Online Journalism, has no ties with CQ Press but thinks it does a better job than other publishers of staying nimble.

“There are several textbooks out there that say ‘online journalism’ or ‘convergent’ in the title, and they are totally out of date and should not be used,” McAdams said. “If the copyright date is 2007 or before, that book should not be used in any course today anywhere in the world.”

McAdams wrote a 2005 book called Flash Journalism: How to Create Multimedia News Packages, but she soon decided print publishing was too slow for the field she was writing about. Her blog, which links to her free 42-page Reporter’s Guide to Multimedia Proficiency, gives her the flexibility to update at will, and has earned her a reputation as an authority on digital media.

McAdams said she has been asked to write textbooks about online journalism, but she can’t fathom turning in a manuscript and then waiting up to a year to see it published. “I worked in book publishing in the ’80s, and that’s how long it took to put out a book. That was our timeline in 1984!”

She doesn’t make any money off her blog, save for about $10 a month through some Amazon product links on her site. But then again, professors generally don’t get very far — financially or with tenure committees — by writing textbooks either. “Love or reputation. Those are the reasons,” she said.

Briggs figures his readers understand the timetable of a traditional publication cycle. And he tries to hedge his bets just in case. Although JournalismNext shows its age in some spots — Flip video cameras, described in the book as “a staple in the beginning video journalist’s toolbox,” have since been discontinued — it also acknowledges its limitations. In a section on data management providers, Briggs writes that “a static list in a book like this can be only a starting point. Things change fast.” He then directs the reader to tech blogs like Mashable that track the latest innovations.

Kanigel, Briggs and McAdams agree that the safest path is to focus on journalism concepts and values rather than specific equipment or providers, even when something looks like a sure thing.

“There is no way that a textbook can keep up with the changes in the media industry,” Kanigel said. “They are good for providing a framework, a grounding, the things that aren’t changing much: how to get a story, how to write a story, what is a lede and what is a nut graph. All those basic things aren’t changing. What’s changing is the technology, the nuances of how to get information.”

True, but it can be hard to separate the two as the medium increasingly shapes the message — and the legal, ethical and practical considerations that come with it. A shift away from the paralysis of the printed textbook is inevitable, but until it can be done well, students would still rather pay for instruction on a page rather than a screen.

“At the end of the day we’re still doing Communications 101, which is to know your audience and know how to reach them,” Briggs said. “Traditional books are what they want, so that’s what we’re giving them.”