The Necessity of Data Journalism in the New Digital Community 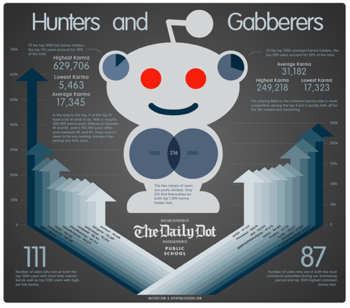 The Daily Dot recently analyzed the Reddit community, ranking its users on a variety of metrics tracking activity, engagement and influence. Click the image in the post for the full graphic.

This is the second post in a series from Nicholas White, the co-founder and CEO of The Daily Dot.

It used to be, to be a good reporter, all you had to do was get drunk with the right people.

The news industry is built on the assumption that if you give a reporter a notebook and a few days to ramp up, he can write authoritatively on any subject. That's not enough anymore.

Sure, it helped if you could string a few words together, but what was really important was that when news broke, you could get the right person on the phone and get the skinny. Or when something scandalous was going down somewhere, someone would pick up the phone and call you.

Increasingly today, in selecting and training reporters, the industry seems to focus on the stringing-words-together part. (If CJR wants to study something, I suggest comparing alcohol consumption among newsroom employees and circulation. Both have been dropping steadily since the ’70s. Coincidence? I think not.)

That’s not how we’re building our newsroom at The Daily Dot. Don’t get me wrong, we want people who can write, but that’s not actually our first — or only — criterion. While it’s still early days, we’ve done at least two things that are very exciting and critical to our long-term success — and they’re not things that should remain unique to us. I think they point toward the future success of the industry as a whole.

One: Our very first newsroom hire, after our executive editor, was Grant Robertson, who’s not only a reporter and an editor, but also a programmer. Two: We have, in partnership with the math whizzes at Ravel, analyzed the Reddit and Tumblr communities, ranking their users on a variety of metrics tracking activity, engagement and influence.

We found it necessary to push early in this direction because of our unique coverage area and we’re in the fortunate position of being able to build our newsroom from scratch.

Finding a New Kind of Source

The challenge for The Daily Dot, which covers online life, is this: How do we actually get our news? Traditional papers can cover the news by reading media reports in the police station or literally chasing people down the street. We can chase people down online, but there are no reports. The data we produced on Reddit and Tumblr is interesting in itself, of course (and we’ll be releasing more of it), but we did it because we wanted unique insight into the community and we wanted a source list.

We wanted to know who to get drunk with.

It turns out that’s still relevant. The first community we started covering was Reddit. Reddit is somewhat easier because it’s an active group of users who are engaging with each other and with a range of important issues, and it’s all right there for the reporter to see. It’s like standing in the middle of Times Square and listening to the conversations of the passers-by, street performers, evangelists, hawkers and protesters. When we crunched the numbers, we got a big compass pointing to the most active, interesting discussions and movements.

But if Reddit is New York, Tumblr, it turns out, is Los Angeles.

“(L.A.) is a place where they’ve taken a desert and turned it into their dreams. I’ve seen a lot of L.A. and I think it’s also a place of secrets: secret houses, secret lives, secret pleasures. And no one is looking to the outside for verification that what they’re doing is all right.” — L.A. Story

You could say the same thing about Tumblr. The 10 most influential Tumblogs are quite different from what you find on Reddit. If you look at the posts from maxwellhill, who has the highest Link Karma on Reddit, you’ll see discussions of new, stricter copyright laws or Facebook’s facial recognition software, and many of those threads have hundreds or even thousands of comments.

On Tumblr, you get collections of snippets — little glimpses into what’s important to this particular complete stranger: a photo of sushi shaped like little pandas; glossy magazine fashion shots; a clip of a song from Nina Simone; or a moment from a TV show like “Buffy the Vampire Slayer.” There’s often little explanation. Hundreds of people may have liked the post, but there are no comments. These are often, one feels, intensely personal revelations, like walking neighborhood streets in Westwood, and, over a garden wall, catching a snippet or two of conversation, arguments, lovemaking, people’s plans and dreams and fears.

As to the should … I honestly don’t know, but as a reporter, I’ve learned to follow my nose and try to keep my feet under me.

In other words, the old skills still matter. In some sense they’re more precious than ever. But they aren’t enough. Data needs to be interpreted well, and we need people who can use technology in highly advanced ways to produce the insight readers crave.

We need to ask the data the same tough questions we ask experts and other sources. We’ve enlisted sophisticated mathematicians in the cause of journalism. We’ve hired an editor that loves to geek out over data. There’s a lot of nuance and expertise in this process.

Consider the example of these Reddit and Tumblr data we’ve produced. As Zach, one of the founding mathematicians at Ravel, has pointed out to me: It’s one thing to be active and another to be important. It’s a relatively simple process to say who’s posted the most on Tumblr. But that poster might just be a bot that no one cares about. That tumblog in the greater Tumblr community is like dropping a big rock in a pond and seeing just one or two ripples go out. Another poster might post one thing a week, and yet that one thing gets liked and reblogged out the wazoo. That tumblog is like dropping a pebble in a pond and seeing a huge splash. It’s the splash that matters, and it’s much more difficult to measure.

Which brings me to the most practical challenge: We bill ourselves as the hometown newspaper of the worldwide web. Unlike most newspapers, we’re not buying a printing press. But what we are doing is worrying about things like, how do you calculate an influence ranking when you’ve got millions (no, really, millions) of data points? Turns out, you can’t do that in Excel; its limit is a measly 65,536 rows. (Answer, btw: GoldenOrb.)

The Daily Dot may be going in this direction now because of our unique coverage area, but if this industry is to flourish in the 21st century, programming journalists should not remain unique. Data, just like the views of experts, men on the street, polls and participants, is a perspective on the world. And in the age of ATMs, automatic doors and customer loyalty cards, it’s become just as ubiquitous.

But the media isn’t so good with data, with actual mathematics. Our stock-in-trade is the anecdote. Despite a complete lack of solid evidence, we’ve been telling people their cell phones will give them cancer. Our society ping pongs between eating and not eating carbs, drinking too much coffee and not enough water, getting more Omega-3s — all on the basis of epidemiological research that is far, far, far from definitive. Most reporters do not know how to evaluate research studies, and so they report the authors’ conclusions without any critical evaluation — and studies need critical evaluation.

To cover the online community, The Daily Dot needs data skills. We don’t just need programmers to produce a website; we need some in the newsroom, too. And we need highly skilled mathematicians. We need people who didn’t spend all their time in the humanities in college — we need those who understand scientific research.

In the information age, journalism needs to go further. Information bombards us. What is scarce is insight, understanding and knowledge.

The news industry is built on the assumption that if you give a reporter a notebook and a few days to ramp up, he can write authoritatively on any subject. That’s not enough anymore. In today’s information-rich world, reporters need to bring more to the table. To provide readers with truly insightful experiences, they need to have the kind of expertise that will allow them to see the story behind the story, to see what’s really going on.

I’m not saying that we need nothing but mathematicians, but we do need a broad range of knowledge skills in the newsroom, and people with real domain knowledge. Let’s find a police officer who’s still walking a beat after 25 years because he’s such a pain in the ass to the bureaucracy, and hire him to cover cops & courts. So what if he can’t string two words together? That’s why we have editors — in fact, let’s bring back the rewrite desk, and free a few people from the writing requirement entirely.

We shouldn’t exclude existing journalists — they’re great people with a lot of important skills. But how many newsrooms offer advanced, systematic training programs? Goldman Sachs will send you to business school, but I’ve never heard of a newspaper even sending a reporter to night school.

Instead, newsrooms have spent the last two decades buying out the reporters that had spent 30 years on the same beat, who’d built the kind of expertise I’m talking about the long, hard way — who’d gotten drunk with every source they could even pretend was relevant (and hope to expense). Let’s find a few of those guys and hire them back, too.

There are many ways of knowing, and we need them all.

People are drowning in a flood of information today — it’s busting the levees, and it’s only getting higher. If we in the media are going to help people navigate it, we need to build our raft out of something sturdier than the thin reeds of anecdotes and intuition we’ve been getting away with in recent years. We need to build it out of great oak trees of knowledge, insight and experience.

Nicholas White is the co-founder and CEO of The Daily Dot, the hometown newspaper of the worldwide web. A longtime executive in community news, he most recently served as a VP of Audience Development at Sandusky Newspapers Inc., which was founded in 1822 and runs 22 newspapers and radio stations around the country.