Massive Digital Divide for Native Americans is ‘A Travesty’ 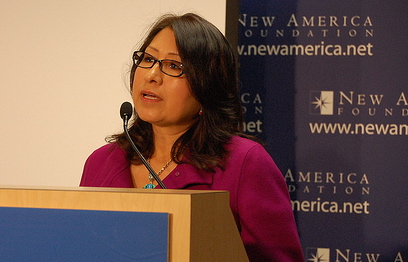 Loris Ann Taylor, president of Native Public Media, announces the release of a report on Internet use in Native American communities, produced with the New America Foundation in 2009. Photo from the "New American Foundation":http://www.flickr.com/people/newamerica/ via Flickr.

Perhaps nowhere in the United States does the digital divide cut as wide as in Indian Country. More than 90 percent of tribal populations lack high-speed Internet access, and usage rates are as low as 5 percent in some areas, according to the Federal Communications Commission.

If we leave people out from having access or ownership or control of the technology, then we're really denying them something even larger." -Loris Ann Taylor
Sascha Meinrath

“You have a community that perhaps treasures media and cultural production more than almost any other constituency in the country, and you have an entire dearth of access to new media production and dissemination technology,” Meinrath said.

Since 2009, New America Foundation has worked with Native Public Media, which supports and advocates for Native American media outlets, to help tribal communities take advantage of new media platforms. In January, the organizations formalized their partnership, and this fall, they plan to launch a media literacy pilot project that will train Native radio broadcasters in at least four communities to tell stories using digital tools.

The organizations plan to work with both digital experts and tribal groups that have pioneered technology adoption. An oft-cited example is the Tribal Digital Village in Southern California, which brought Internet access to libraries, schools and other community buildings across 13 reservations, with grants from Hewlett-Packard and others.

Native Public Media has itself led the way in digital storytelling, partnering with WGBH in 2009 on We Shall Remain, a multi-platform project on Native history. But its primary goal is expanding local production.

As innovative as these projects are, without access, they will only reach a fraction of the Native population.

‘The Digital Revolution is Stirring’

Native Americans will be savvy users of new media when connectivity arrives, Meinrath said. A 2009 report [PDF file] he co-authored found that when broadband was available, Native Americans did everything from blog to download podcasts at higher rates than national averages. Although the report noted that it was more exploratory than representative, it concluded: “The digital revolution is stirring in tribal communities.”

Still, the revolution is far away for most Native Americans. Broadband infrastructure does not exist in most tribal areas, and where it does, charges are marked up radically, compared with urban centers — by 13,000 percent, in some cases, Meinrath said. Regulatory frameworks have also contributed to under-servicing, he said.

Lately, advocacy by Native Public Media and others for government action seems to be paying off. The FCC’s National Broadband Plan, unveiled in March 2010, included the goal of increasing broadband access on tribal lands, with involvement from local leaders. The Plan recommended that Congress consider creating a Tribal Broadband Fund. Last August, the FCC established an Office of Native Affairs and Policy to work with the 565 federally recognized tribes on improving access to communications services. One of its first moves, in March 2011, was to invite tribal representatives to a Native Nations Day, where the FCC expanded a “tribal priority” to promote licensing of radio stations serving Native communities.

Recent federal action is a leap forward in focusing attention on a long-ignored issue and producing empirical data for reform, Meinrath said.

Yet, he noted that progress has largely remained rhetorical. “We’ve run into an FCC and an Obama administration that has not, as a whole, prioritized this issue,” he said.

When it comes to expanding access, the challenges are steep. Many tribal areas are geographically remote, which can make provision difficult and expensive, according to the National Broadband Plan. Service is unaffordable for many Native Americans, a quarter of whom live at or below the poverty line. At the same time, funding for public media and telecommunications facilities is at risk.

But, physical remoteness and high costs are a familiar excuse for failure to serve Indian Country among decision-makers focused on majority constituents, Meinrath said.

“This is not a technical problem — this is a remarkable lack of leadership,” he said.

The challenge is not only addressing a digital divide, but also a pattern of historical exclusion from media and communication services, Taylor said. Some tribal populations still lack emergency and postal services, and almost a third lack basic telephone service. The rapid pace of technology risks leaving Native populations even further behind.

Despite the challenges, the potential for technology to improve media capacity in tribal areas is tremendous, Taylor said. New media tools will help Native Americans cover issues that are ignored or misrepresented in mainstream media. They can fill extreme gaps in information access and enable cultural preservation. They allow local news and cultural programming to reach tribal members who have left reservations for jobs or military service.

Critically, technology offers a chance to “leap over” the traditional media divide, especially as many tribal newspapers have shut down in the economic downturn, and radio stations, the traditional medium of choice for Native communities, are not feasible in all areas, Taylor said.

Most of all, Taylor’s vision is about enabling Native Americans to have a voice on vital issues, from the housing market to the energy crisis.

“In this country, if we leave people out from having access or ownership or control of the technology, then we’re really denying them something even larger — to have participation in a democratic society,” she said. “It’s really about self-determination at the end of the day.”

Katia Savchuk works as an investigator and writes for Ethical Traveler and Polis, a collaborative urbanism blog she co-founded. She previously spent a year and a half documenting the work of slum-dweller federations in India. Her writing has appeared in Let’s Go travel guides, Environment & Urbanization and the Palo Alto Weekly.