10 Big Ideas for the Future of Film 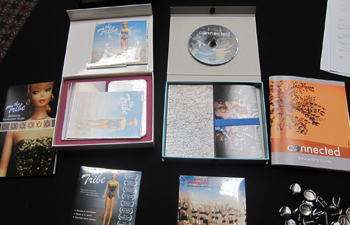 The educational kit for "Connected" includes a curriculum, a 100-page book and conversation cards

Alfred Hitchcock said a film is made three times: when you write it, when you shoot it, and when you edit it. Today there’s a fourth: when you distribute it. With all the new technologies and D.I.Y. opportunities available to reach people with your project in fresh and exciting ways, you get to be just as creative when you take a film out into the world.

All these new tools are about the power of us being connected, helping each other...So ultimately, we are interdependent filmmakers."
Alfred Hitchcock

My team and I have done a lot of experiments in distribution with our film “The Tribe,” which played at Tribeca Film Festival in 2006. In many ways, I felt like we were throwing spaghetti at the constantly receding wall of the Internet to see what sticks. A lot stuck. Our 18 minute film, “The Tribe,” became the first documentary to ever reach #1 on iTunes.

This was thanks to an amazing community that we connected with at festivals like Tribeca. They supported us, followed us, linked to us and continued to spread the word, which ultimately made it so we raced past Pixar and Universal on that iTunes list.

That was five years ago. With all the new tools available today, we’re not only able to throw pasta strands but able to have a big feast with all the people that want to engage with our films.

In terms of the future of film, below is a list of things I want to help make happen in the future.

1. All films would be translatable to every language on Earth so everyone could experience them.

2. All video images/songs you found online could be easily negotiated with a simple rights page, or through Creative Commons.

3. There will be a true transparency on distribution sales, expenses and with aggregators.

4. The crazy time labels/constraints will be removed. No longer a world of just “shorts & features.” Time is a construct and there is room for every length and every length should receive the same respect.

5. When you search a subject on Google, the results you get — along with books and articles — you would also see trailers of videos about the subject too (that one is not too far away).

7. As a documentarian, there could be a website where you could show a whole film and hyperlink outward every clip that you can contextualize or get more info.

8. 3D documentaries will be inexpensive to make so the visceral experience of important subjects of our day can be conveyed in immersive forms.

10. Any small idea repeated thousands or millions of times via the web becomes a big idea. That’s the power of the network. That’s the future.

The goal with all of my films is to trigger conversations about important issues of our day. In some ways I no longer think of myself as a filmmaker but more like a conversation maker. We want to provide people a way to engage with the core ideas in the film through many entry points and experiences…whether it’s the film, physical objects to read or play with, mobile phone apps and live events.

While nothing will replace the bonding that happens in the dark watching a movie together, there are many tools that can help extend a conversation that a film sparks. For “The Tribe,” we created a discussion kit that included the film, a written guide, conversation cards, and curriculum. 2006 was also when critical mass had finally appeared on Facebook so we were able to expand the discussion and community. I also have had an email newsletter for a decade since I started The Webby Awards called, “Breakfast at Tiffany’s” which I send out to my community 4 times a year. Old school email is still a great way to engage people in dialogue and experiments.

For our new feature documentary film Connected: An Autoblogography about Love, Death & Technology (Sundance 2011), we engaged our community — even while we were making the film. Filmmaking to me at its core is one big collaborative interconnected idea fest. I write collaboratively, edit collaboratively, get a lot of feedback from minds I love as well as from the hive mind online through Twitter and Facebook. During the script writing, I asked questions about subjects we were wrestling with, song suggestions, archival shot ideas and received amazing responses — many of which ended up in the film. It’s ultimately all about the push and pull of other people’s perspectives that excites me about the collaborative nature of filmmaking and the Internet.

We want to take all forms of engagement with our audience to a whole new level with our new film, “Connected” by giving our community even more ways to experience the ideas of the film now that it’s been released. “Connected” explores what it means to be connected in the 21st century — both personally and globally. Here’s the trailer for it:

For the film, we have a mobile phone app coming out and an iPad app with Mopix we are working on. We just released our educational kit for the film that includes a curriculum, a 100-page book and conversation cards. We were able to use a new eco-friendly DVD that is recyclable and the whole kit is handmade. We also just released an educational guide to the film. Even though we are fully living in digital times, I am still very into the handmade, and we have a lot of exciting plans coming up in the fall. There are various ways we hope to trigger a global conversation about what it means to be connected in the 21st century.

It’s an incredibly exciting time to be a filmmaker. Not only are we able to make films with inexpensive tools that allow each of us to really have our own production studio, but now we can have this direct connection with our audience. To challenge us, to support us, to engage with ideas so we can all understand them further.

One of my favorite quotes about the future is by John Pierpont Morgan, “Go as far as you can see; when you get there, you’ll be able to see farther.” The future of film is about us all seeing as far as we can see, imagining new forms of connection, making it happen with other filmmakers, supporters and those that engage with our films so we can all see farther …together.

This article was cross-posted at The Future of Film blog, launched as part of the Tribeca (Online) Film Festival, features leading filmmakers and other experts within the film industry sharing their thoughts on film, technology and the future of media. Click here to follow Tiffany Shlain and other experts from film and technology as they comment on the changing media environment on the Tribeca Future of Film Blog.

Honored by Newsweek as one of the “Women Shaping the 21st Century,” Tiffany Shlain is a filmmaker, artist, founder of The Webby Awards and co-founder of the International Academy of Digital Arts & Sciences. Her new feature documentary is Connected: An Autoblogography about Love, Death & Technology. You can follower her on Twitter @tiffanyshlain