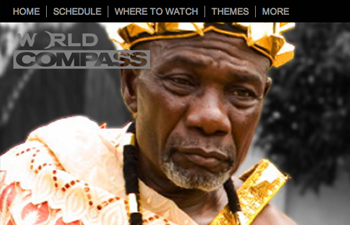 "There's a wonderful opportunity for us to find new ways to bring together content from users and emerging producers as well as from established folks." - Kavita Pillay

How can public media spur multi-platform engagement through a national TV channel? That’s the challenge that was posed to the team developing WorldCompass.org, the companion website for the World TV channel, a news and documentary channel now available in parts of 32 states.

The World channel, originally called PBS World, was piloted in 2007 in the northeast U.S. It featured PBS programs — mostly documentaries — that were still in rights on a 24-hour channel. The channel went national in 2007. Two years later, Boston PBS affiliate WGBH instigated an effort to turn the channel into a multimedia project that invited new voices to public media. (To date, the World channel has not conducted national ratings, although a plan to obtain national numbers is in the works.)

Funded by the Corporation for Public Broadcasting, the World channel is the result of a collaborative partnership. The channel is produced and distributed by WGBH, WNET New York and American Public Television in association with PBS and the National Educational Telecommunications Association, which is more commonly known as NETA.

The website has a slightly different makeup of partners. WorldCompass.org is managed by WGBH, with American Public Television overseeing marketing and managing relationships with stations. The site has also pulled together a team of informal advisors from across the system to offer feedback on a multi-platform strategy.

Part of World’s mission is “to create a new model of content creation and delivery for public media 2.0, one that exemplifies diversity, digital media and dialogue.” WorldCompass.org builds upon the broadcast offerings by offering its own curated content, blogs, and social media features.

Despite facing many of the common public broadcasting challenges — most importantly, a small staff and a wanting budget — WorldCompass.org has made clear strides since the beta launch and the staff is optimistic for the future. A revamped version of the site just launched in response to lessons learned through the initial beta site, which had been in operation since July 1, 2010. Expanded features include more integrated social media tools and organized menu items that help to reinforce the relationship between broadcast and online platforms.

The updated site hopes to take advantage of new tools to engage with “hip” 30- to 45-year-olds and capture the elusive 18- to 34-year-old demographic.

“Currently, a majority of our viewers are your usual PBS demo of 50- to 60-year-olds,” said Matey Odonkor, WorldCompass.org’s manager of online communications. “Not that this is a bad thing.”

Still, World TV has a different mission and audience in mind. “We want to offer age-relevant programming to young adults who grew up watching PBS programs with their parents but stopped watching,” said Odonokor.

Like the World channel, WorldCompass.org aggregates content around monthly themes (The Skin You’re In, Diaspora, etc.), including audio documentaries, feature length films, video blogs, television episodes, and other media. The monthly themes highlight connections among a wide range of stories — both big and small, and objective and subjective.

This month’s theme is Land, and content includes a selection of audio (like this State of the Re:Union broadcast on Greenburg, Kansas) and video features (like this American Experience episode featuring the Civilian Conservation Corps), plus a request for users’ own stories about their experiences with land. There are currently no responses for this request, although it’s still early in the month. However, February’s request for users’ own childhood stories only garnered one user response during that month.

Hari Kondabolu is an up-and-coming comic, who recently starred in a “Comedy Central Presents” special. His videoblogging for WorldCompass is more intimate and personal than his stand-up but no less funny. Here’s a contribution he made to the Diaspora series:

“The hope is to give the user/viewer an ‘I never thought of it that way’ moment as they go through a theme,” Pillay said.

Currently, the topics are chosen by WorldCompass.org’s staff and advisors. But, said Pillay, “at some point, we’re considering a ‘thematic evolution,’ meaning that we’ll retain the creative approach to themes but maybe present them in a different way or on a different calendar. And we’d love to start taking theme suggestions from users!”

Integration between the website and the channel has increased with the relaunch. Streamlined menu options include TV schedules and “Where to Watch” options. The site also now includes video previews and written summaries for films and programs airing on the World channel. WorldCompass.org producers are looking to increase this type of cross-platform promotion by highlighting broadcast content through more live chats, excerpts, deleted scenes and online exclusives.

On the broadcast side, the World channel runs regular interstitials sending viewers to the website for engagement activities and online extras.

And, added Odonkor, “The presence of World’s crop of talented and funny videobloggers on TV and the website helps to tie the two platforms together.”

WorldCompass.org pairs content pieces with crowdsourcing activities. Such “Call-to-action items” include polls, quizzes, trivia, weekend assignments, and live votes. These often link users to WorldCompass’s Facebook page or a partner website. For example, this Faces of America video includes a poll item about Henry Louis Gates’ lineage. To find the correct answer, users are directed to an ABC News story.

In addition to its Facebook fan page, which currently has 285 fans, WorldCompass has integrated social media with a Twitter account (96 followers), and a YouTube channel (44 subscribers). While these numbers are small, the staff is experimenting with ways to increase them.

“When we can, we try to be creative with our use of social media — for example, we organize Facebook live chats [with] viewers and producers,” Odonkor said. “For what we do online, curating shorts, it’s important we provide extras to engage users and invariably increase time spent on the site or the Facebook page.”

WorldCompass.org also employs social media to promote partners’ work. For example, the organization teamed up with the National Black Programming Consortium to promote Season 3 of the AfroPop Series that is airing on World TV.

So far WorldCompass.org’s focus has been on introducing more appealing content — and engaging users with it — rather than convening citizens around particular issues or problems. The tone mirrors other productions and channels aimed at this smart, mobile, multi-ethnic demographic, such as Current TV or IFC. It may be too early to tell how well this approach is working, or whether the site has succeeded in attracting viewers who don’t already watch the channel. PBS has long been attempting to court a younger, hipper demographic with less than stellar results.

Stay tuned for additional videobloggers joining the team over the next few months. In addition, WorldCompass.org is about to increase its original content in the near future, using a combination of licensing, commissioning, and crowdsourcing.

“The site and the channel are works in progress,” said Pillay. “We know that there’s a wonderful opportunity for us to find new ways to bring together content from users and emerging producers as well as from established folks.”