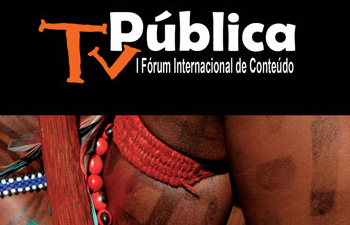 The TV Pública conference, organized by the Brazilian Association of Public, Educational and Cultural Broadcasters, examined the challenges faced by public media in the country.

Belém, BRAZIL — At the mouth of the Amazon river, vendors at the Ver-o-Peso market display the region’s fruits, fish and crafts on splintered tables and rusting carts. They hail prospective buyers who pass by their closely packed stalls. Just a block over, behind the security gate of the Estação das Docas, a collection of renovated waterfront warehouses, eco-tourists stroll in air conditioned comfort past many of the same goods, which have been marked up and packaged as artisanal delights. The night I visit, one of these former warehouses is dedicated to a pop-up fashion fair for rising designers; a female DJ spins club tunes and ironic T-shirts mock souvenir gear.

Such cheek-to-jowl contradictions are common in Brazil, where income disparities are among the highest in the world, and megacities like São Paulo compete for national resources with tiny towns tucked deep in the rainforest. That reality makes it a challenge for the country’s strapped public broadcasting outlets to create content to serve such a wide range of publics. This was the topic of an early December conference, TV Pública: Forum Internacional de Conteúdo, held in Belém’s state-of-the-art Hangar Convention Center.

I'm tired of all this talk. We are ready for action." - Francisco Belda

Public broadcasting is relatively young in Brazil. While TV Cultura, a private, foundation-funded channel offering arts, kids, documentary and sports programming has been around since the ’60s, it was only in late 2007 that the government launched TV Brasil, a federally funded public broadcasting network. It airs Brazilian films, regional and educational programming, and sports. The channel’s national over-the-air reach is limited, but it is available via cable, satellite and online.

Locally, public stations perform a variety of functions — such as providing access to legislative proceedings, educational content and community outreach — but they are not networked together via shared programming, as PBS member stations are. Nor they are centrally administered, as in the case of the BBC. This lack of coordination, and the limited resources allotted these stations via local government funds, will soon be compounded further as the country undertakes the switch from analog to digital broadcast.

The conference, organized by the Brazilian Association of Public, Educational and Cultural Broadcasters, explored these challenges from a variety of perspectives, including content, program coordination and scheduling, infrastructure, funding, management, unwelcome government interference in program choices, and training of a new generation of public media makers. One key question is how stations might possibly hope to fill the four digital channels they will soon acquire in exchange for their one analog signal.

While some independent and non-profit content is broadly available from sources such as
Itaú Cultural, a cultural institute which subsidizes the distribution of regional arts and music programming to stations, few syndication or rights-sharing arrangements have been developed. Many of the attendees had been to previous conferences to tackle these issues, but this was the first international gathering designed to bring perspectives in from other countries about how to manage such a thorny transition.

ADVERTISEMENT
A map of public stations in Brazil and other countries

Simultaneously, Brazilian communications and cultural authorities are working to figure out how to harness online and mobile technologies for the public good. Just weeks before, the Digital Culture conference issued a “declaration of Internet rights,” which asserted “diversity and freedom are the foundation [of] democratic communication. Internet access is a fundamental right.” At the TV Pública conference, one speaker described NavegaPara, a project to provide Internet access in the state of Pará, including remote areas of the Amazon.

Questions about how to use the pending digital broadcast signal to provide interactivity or web access via TV dogged the conference. The digital divide is much wider in Brazil than the U.S. While nearly 95 percent of Brazilians have access to television, high taxes and low incomes make electronic device purchases steep; wiring this large and sometimes rugged country has so far proven difficult.

Of course, none of this has stopped citizen reporters from putting the latest technologies to work. As Global Voices reported:

Young residents in the Complexo do Alemão favelas in Rio de Janeiro have begun using social and citizen media to chronicle the recent wave of violence spreading through the city. Seventeen-year-old aspiring journalist Rene Silva has set up a Twitter account, vozdacomunidade (voice of the community), to monitor the police occupation of the favela complex, with the related hashtag, #vozdacomunidade, already beginning to trend. Meanwhile, Igorcomunidade is also offering updates of what he calls “a guerra do alemão” (Alemão’s War), and another group of young locals has started streaming footage of the occupation.

As in the U.S., producers with one foot in the old and new media worlds are growing a bit weary of discussing the myriad transitions, and are now eager to start building multi-platform public media models that can thrive. Francisco Belda, the director of a local newspaper near São Paulo that is considering ways to transition from print to digital is also a professor at São Paulo State University. He led a workshop at the TV Pública conference on how to create a new programming grid for public stations. We discussed his impatience with the pace of both industry and policy change.