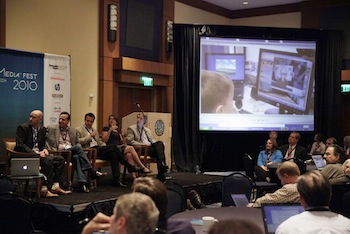 The augmented reality panel at the FutureMedia Fest

You point your wireless device — cell phone, iPad, whatever — at a graphic on a box of unassembled furniture and then the instructions, complete with 3-D diagrams, instantly appear on-screen. Point at a piece of paper and it’s suddenly a game board shared by friends across the room or across the world.

This is augmented reality, or AR. While still in its infancy, it’s light years ahead of old-fashioned virtual reality. For one, you don’t need bulky gear; you can use AR anywhere your wireless device can go. Plus, the environment is real — only the graphics are simulated. All you need is a webcam or wireless device with the proper software and a nearby “marker,” a graphic that activates the application.

"Social media is inseparable from augmented reality. You're in the real world and you want to interact with your real friends." - Ori Inbar

Inbar and AR experts from PBS, Qualcomm and Alcatel-Lucent spoke recently on a panel at FutureMedia Fest at Atlanta’s Georgia Tech. They all agreed that AR is about to show explosive growth. It’s already cropping up all around us.

CNN debuted an augmented reality effect during its 2010 election night coverage. Instead of routine full-screen graphics, Ali Velshi strolled through a 3-D bar graph of exit poll results that seemed to hang in mid-air. Watch it here:

Anderson Cooper used a huge virtual Capitol to set the stage for the results. John King used a touch-wall election matrix to scroll through 100 races, showing the depth of the Republican incursion into Democratic incumbent territory.

“What we did [on election] night was actually incredibly complicated,” CNN senior vice president and Washington bureau chief David Bohrman said the day after the elections.

While the effect looked seamless, Bohrman said it required a huge network of infrared lights, computers and of course, people. “What’s important is that we’re able to clearly explain what’s happening,” he said. “The election matrix was absolutely illuminating on the changes in Congress. It was one of the most revealing and informative graphic devices I think I’ve ever seen used anywhere.”

The correspondents were indeed manipulating the graphics themselves, he says. Velshi, for example, controlled the graphics from an iPad app. “It made it much better,” Bohrman said. “It’s better to have the person who’s telling the story trigger those things than have someone off-camera.”

Bohrman, who also dreamed up the 2007 CNN/YouTube presidential debate and the virtual Capitol and hologram effect in 2008, is already planning for 2012.

Ogmento’s Inbar sees additional potential uses for AR by news organizations. “You see a big crowd and you don’t know what’s happening there — you point your device and all of a sudden you get ‘the president is visiting’ or ‘there’s been an accident,’” he said. “It’s kind of like Twitter but with a visual aspect to it.”

Aside from CNN, another TV operation in Atlanta has already adopted AR. WXIA-TV 11 Alive will beam the day’s headlines at you if you click on a graphic next to the Twitter and Facebook icons on its website. The station will also use AR at two upcoming public events. The audience at a Social Media Atlanta 2010 discussion about the Democratization of News will be able to receive information and videos about the panelists on their phones. (Disclosure: I am providing public relations services for that conference.) The station will also put a marker in a printed program for a holiday lights display to give visitors traffic updates in order to help them get home.

A fashion spread inside the issue also let readers change both the weather and Jeremy Renner’s clothes. Floating animation surrounded actress Gillian Jacobs as she told a joke.

AR For Kids and Ads

Aside from the world of news, it also has tremendous potential for education.

“Every new technology is an opportunity for learning,” said PBS Kids Interactive vice president Sara DeWitt, who notes that one of AR’s most exciting aspects is its ability to connect kids to the real world. “We see some real possibilities for young kids to interact with these 3-D objects in a way that they normally wouldn’t.”

PBSKids.org recently launched Dinosaur Train Hatching Party, an augmented reality game for 3- to 5-year-olds. An adult prints out a colorful graphic and when a pre-schooler holds it in front of a webcam, a 3-D dinosaur egg appears on-screen. Because eggs need the warmth of the sun to hatch, the toddler turns the paper so light hits it from different directions. A baby dinosaur cracks open the egg and asks the child simple science questions he or she answers by touching the paper.

AR also opens up a whole new world for advertising. This spring Calvin Klein Underwear partnered with GQ to present AR underwear ads. In July, Gannett subsidiary PointRoll and marketing company Oddcast announced they’d bring AR to banner ads. The press release cited a possible use case: “a car manufacturer can create an AR environment that mimics a new car model’s interior where users can examine the interior freely, almost as if they were physically sitting inside the car.”

More gee-whiz uses, especially in gaming, could be coming soon. On October 4, Qualcomm announced it was giving away its AR Software Development Kit for Android smartphones in order to encourage developers to build new applications. Then, of course, there is the potential for AR to integrate with and impact the world of social media.

“I think social media is inseparable from augmented reality,” Inbar said. “You’re in the real world and you want to interact with your real friends. In a sense it’s going to be an integral part of any AR experience in the future.”

There are still barriers to be overcome before AR is commonplace. On the panel, Jay Wright, director of business development at Qualcomm, joked that augmented reality is a battery’s worst nightmare due to its power-draining abilities. Much more work is needed to make AR reach its potential on devices. User adoption is another significant challenge.

While it could take years to enter the mainstream, augmented reality is clearly gaining momentum. It’s only a matter of time before it enters a classroom — or a newsroom — near you.