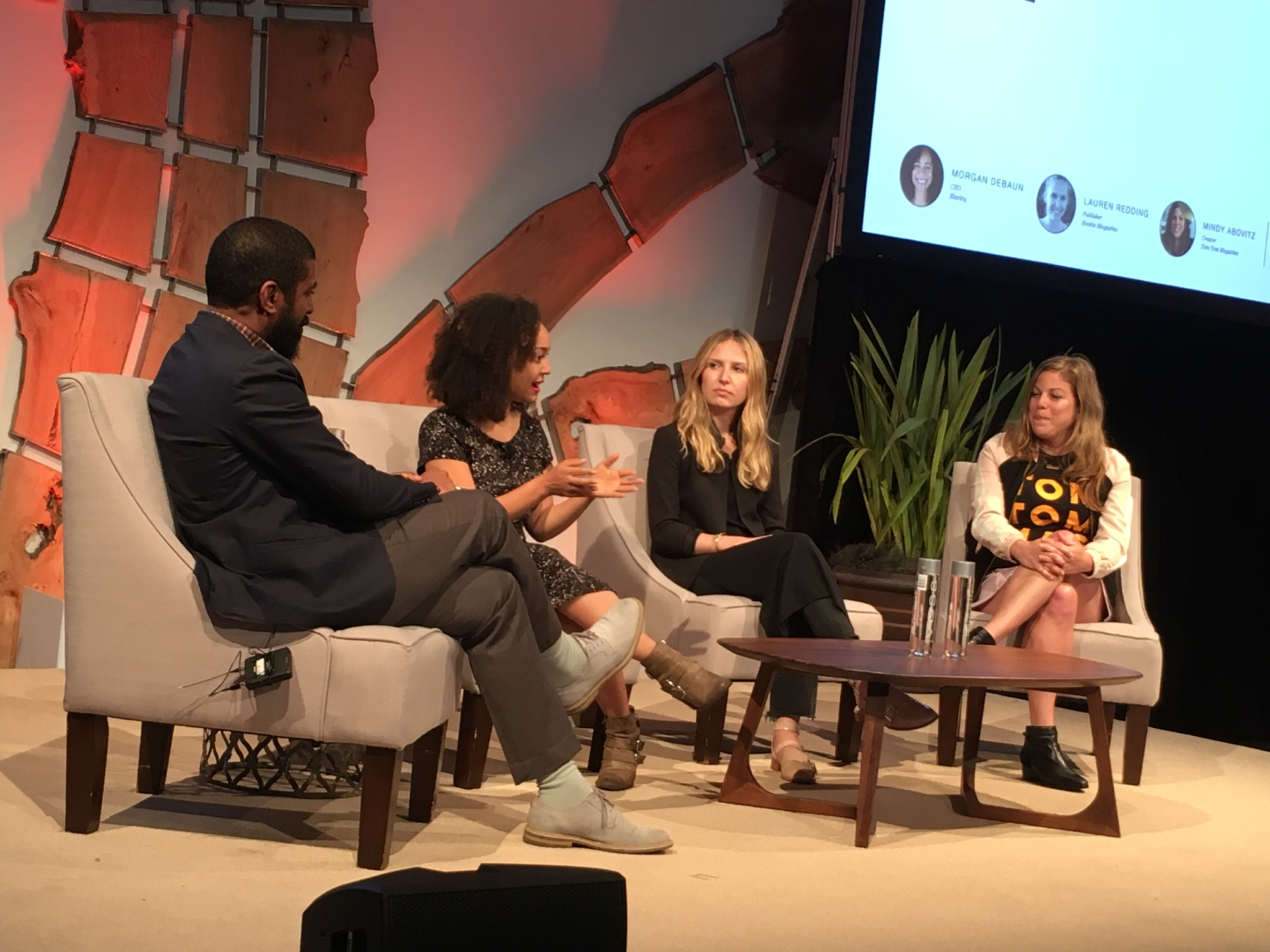 SAN FRANCISCO – As the founder and editor-in-chief of Tom Tom Magazine, a feminist multi-platform media company dedicated to women drummers, Mindy Abovitz has faced more than her share of slammed doors and belittling comments. But the Brooklyn-based entrepreneur said the rejections and taunts simply fire her up.

“Anger has always fueled me and it continues to fuel me,” said Abovitz, who started the magazine in 2009. “It’s my number one fuel.”

“We’re exploring how creativity is at the heart of how societies move forward...That’s what the world needs more than ever right now.” -Joe Hyrkin

Abovitz was one of more than a dozen speakers who reflected on their creative processes on October 5 at the first-ever Generators Summit sponsored by issuu, the digital publishing platform. Though issuu works primarily with print and online publishers and brands to distribute digital content, the summit featured speakers and participants from across the creative spectrum – virtual reality and video games, design and visual art, technology and video, as well as publishing.

“We’re exploring how creativity is at the heart of how societies move forward,” issuu CEO Joe Hyrkin said in introducing the day of speakers and panels. “That’s what the world needs more than ever right now.”

About 150 entrepreneurs and artists of all stripes gathered for the summit at the Pearl, a multi-level event space in the hip Dogpatch neighborhood in San Francisco’s South of Market district. It began with bite-size quiches, yogurt and fruit salad on the roof followed by a guided meditation led by Will Kabat-Zinn, an insight meditation teacher who studied mindfulness at monasteries in Burma.

Abovitz spoke on a panel featuring new voices in media that included Morgan DeBaun, founder and CEO of Blavity, a tech media platform for black millennials, and Lauren Redding, publisher of Rookie, a media company and book series for teen girls.

All three women talked about the challenges of starting and growing a media business when you’re female and young.

Rookie was founded in 2011 by Tavi Gevinson, then a 15-year-old high school student who had already won attention for the fashion blog Style Rookie, which she started publishing at the age of 12.

Redding said in her day-to-day worklife she deals with smart, savvy, accomplished young women. “But on the business side it often feels like we’re not taken seriously because our target audience is not male.”

Morgan DeBaun, founder and CEO of Blavity, brought the multi-platform media company to life just as the Black Lives Matter Movement was gathering steam. It’s now one of the fastest growing media companies.

DeBaun started working on Blavity around the time Michael Brown was killed by a Ferguson, Missouri police officer. As she watched communities around the country rise up in protest, she felt that “traditional black media – Essence and Ebony – weren’t covering what was really going on,” she said. DeBaun, who was then working for a Silicon Valley startup that had been purchased by Intuit, wanted Blavity (a mashup of “black” and “gravity”), to fill the gap, giving people a centralized place where they could share their thoughts and experiences.

Asked how she responded to the obstacles of racism, sexism and ageism, she said, “I just had to work harder, faster, longer,” DeBaun said. “I had a fever for five days but I was working in bed. I didn’t have a choice. If I’m out for five days that does have an impact. As a woman, I don’t have as many safety nets. We have to take bigger risks.”

While the theme of the day was creativity, speakers weren’t afraid to discuss practical matters, including the novel ways they had found to make money as artists, writers and thinkers.

Later in the day, during a session on venture capital, a panel of experts supported the notion that engaged audiences are willing to pay for content.

Charles Hudson, managing partner at Precursor Ventures, a seed-stage venture capital firm, offered the example of The Athletic, a new sports website that offers high-quality, in-depth, hyperlocal content. “We’re seeing people who are willing to pay $50 a year to read the best sports content. Five years ago that would have been an impossible business model.” Now, he says, after media companies like Netflix and Hulu have paved the way, “I’ve seen consumer willingness to pay for content. I think we’ve turned a corner.”

Issuu is also investing in the idea that consumers will pay for content.

As part of the conference, Hyrkin unveiled issuu’s new digital sales initiative, which allows publishers to sell digital content through issuu using Stripe, an online payment system. Until now, content on issuu has been free and publishers who wanted to charge had to find their own payment systems. Using this new option, publishers can now sell specific content, such as individual publications, or subscriptions to their content, and they can accept payments on their websites, on social media and on issuu itself.

The digital sales program offers both publishers and issuu a new source of revenue. Issuu takes a 30 percent cut for each transaction and Stripe will get 2 to 3 percent. That leaves about 67 or 68 percent for the publishers, who set their own prices.

Paul Vitale, marketing and business development director for Sweet Paul Magazine, a food and lifestyle magazine, beta-tested the new digital sales system earlier this year and found it to be a simple and easy way for the magazine to sell content and for consumers to buy it.

Vitale says the issuu digital sales system replaces a system he rigged up that was clunky and sometimes difficult for readers to navigate. “Some of our readers are not super tech-savvy and any road blocks can throw them for a loop. This process is seamless. Anybody can flip through it.”

Rachele Kanigel is an associate professor of journalism at San Francisco State University, where she advises Golden Gate Xpress, the student newspaper, and teaches reporting, writing, magazine and online journalism classes. She was a daily newspaper reporter for 15 years and has freelanced for magazines and websites. She has taught in or directed five summer study-abroad programs for the Institute for Education in International Media (ieiMedia). She is the author of The Student Newspaper Survival Guide. Follow her at @jourprof.