Fight Fire with Convergence: J-Schools Must Address Both Anger and Distrust of Media 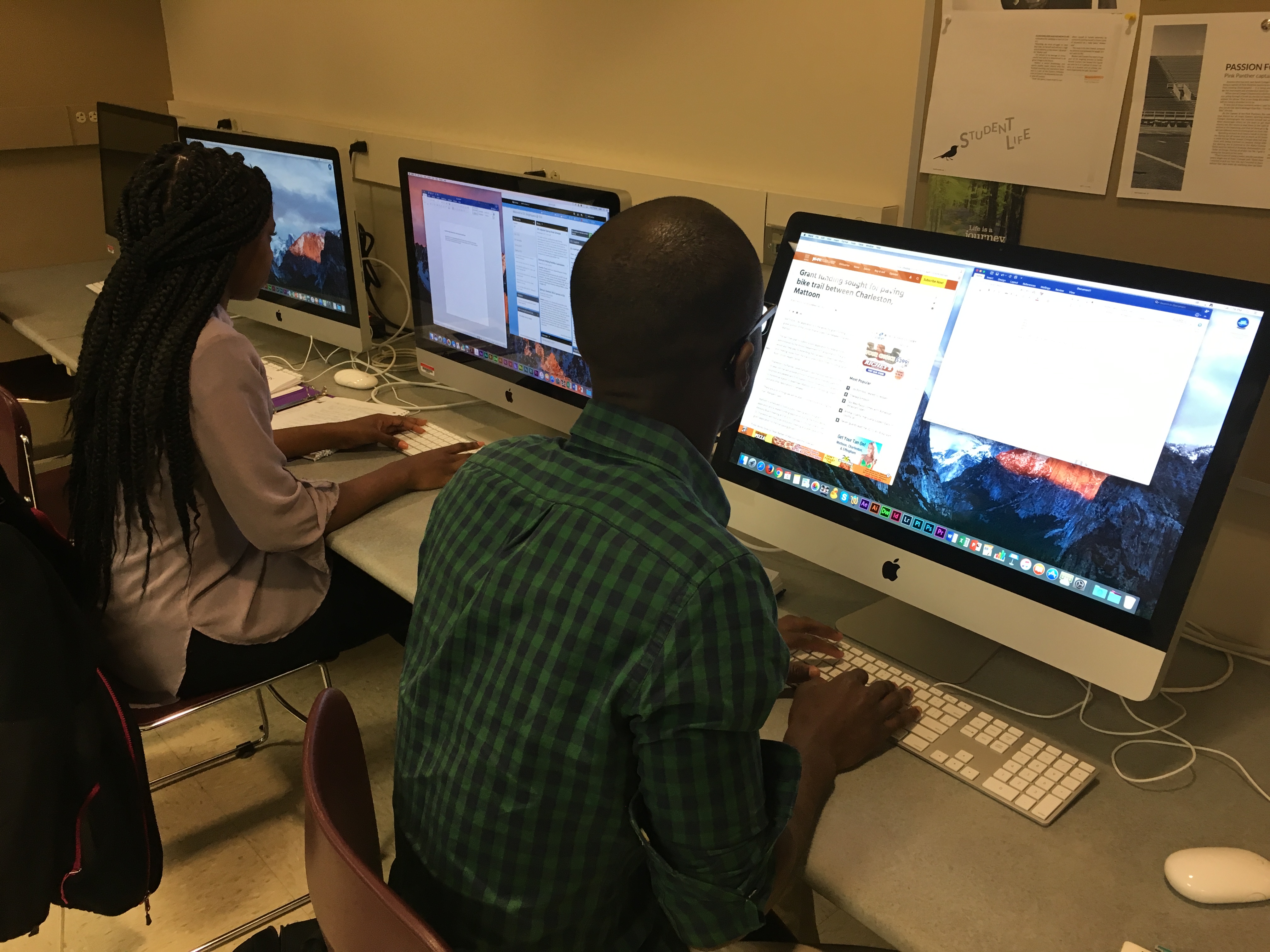 Eastern Illinois University students research as they start writing a news story after covering the Charleston City Council meeting in the spring of 2017. Students in Writing for News Media use various digital methods to tell stories, striving to make a convergence methodology trustworthy for their readers. (Photo courtesy Amanda Bright)

Although there can be a stark distinction between actual journalists and those “in the media,” the public doesn’t always know the difference. Malice is now directed at both, in the form of digital threats as well as physical violence.

The high-profile narrative of the assault of Guardian reporter Ben Jacobs by now-Montana congressman Greg Gianforte raised the visibility of this issue, but it is by far not the only account.

The other purpose for this curriculum-as-convergence mandate? This is how we can regain credibility with the public, slowly but surely, in the digital age.

It is now all too clear there is a deep sentiment of distrust — and possibly hatred — against journalists.

According to NBC’s Bradd Jaffy, the last month has seen journalists “arrested, slapped, pinned against a wall, choke-slammed for trying to do their jobs.” The Washington Post also detailed this string of incidents against reporters, noting that Reporters Without Borders recently lowered the U.S. press freedom index by two spots, ranking it only 43 out of 180 nations analyzed. Just this week, the offices of the Lexington (Ky.) Herald-Leader were attacked.

In 1 month—journalists have been arrested, slapped, pinned against a wall, choke-slammed for trying to do their jobs https://t.co/VmqAgizKiZ

However, it was the Gianforte incident specifically, after a Fox News team corroborated the reporter’s account and an audio recording of the event was released, that some didn’t believe. Others welcomed the abuse against the journalist.

Journalism educators must face their students and instill in them the importance of journalism and the need to report even under the auspices of anger and hate. This climate is challenging for all journalists, including the ones who’ve left for academia. We didn’t face this.

When I was in community newspapers, as recently as the 1990s and 2000s, the biggest complaint I received from the public was about a misspelled name in a cutline. Beyond the fussiness of quote selection or photo placement, back then, most people felt about journalists as they felt about police officers or public school teachers: There were a few bad apples, but in general, their work was worthwhile and credible.

Thanks in large part to digital media, that sentiment has changed. The average citizen has a platform nearly as viable as the journalist, and we are consistently, and sometimes savagely, hearing from them. Perhaps the ubiquity of anti-journalism sentiment online has emboldened people to harass journalists in person.

With the rhetoric and the (sometimes literal) pushback against journalists escalating, what should we be doing in j-schools to prepare those entering the field? The problem could also be the answer.

Like groups who take a symbol or term used in hate and reclaim it, journalists should apply the same digital media tools that are enflaming aggression against journalism to practice even more professionally. Journalists must use every resource available to lend credibility and support to their reporting.

This practice must start in journalism school. From introduction to news writing through communications law, convergence should be the norm for every assignment, every project, to prepare our young reporters for a world that won’t believe or agree just because they say so.

When students cover a city council meeting, it can’t just be about the 12-inch story that is written and submitted to the student newspaper. Instead, it needs to be photo slideshows, Facebook Live video, live tweeting, images of original documents, podcasts with meeting audio clips, and infographics or maps based on city data that back up the lede and its inverted pyramid ideas.

This is good pedagogy partly because journalists are capable of such techniques at a low cost and with a manageable learning curve. Convergence within every piece of the curriculum is also good storytelling; it allows for an in-depth, non-linear approach to the facts, which suits modern readers and the complexity of most newsworthy issues.

MT GOP voter, upon learning we’re from @CNN: “You’re lucky someone doesn’t pop one of you.”

MT GOP voter to me just now, knowing I work for @CNN: “That audio made me cheer.” She smiled as she walked in to vote for Gianforte.

The other purpose for this curriculum-as-convergence mandate? This is how we can regain credibility with the public, slowly but surely, in the digital age. We need to be even more transparent and allow our readers a peek at the paper (or non-paper) trail whenever possible. Like in any relationship, consistent honesty can rebuild trust. We won’t be able to win all hearts and minds, but the next generation of reporters will have to build bridges not only for a working business model but also to embody the full calling of the Fourth Estate.

Yes, there will still be an abundance of misinformation in our digital world, some unintentional and some heinous. And, yes, we must still engrain in journalism students the elements of newsworthiness, with an emphasis on impact to readers versus novelty when we employ these methods.

But, student journalists must be trained now, in college and high school programs big and small, to fight fire with clear, undeniable truth, using every tool and technique they can get their hands on. Using the limitless potential of digital storytelling to be accurate and fair can become the norm, and our next generation of journalists can lead the charge.

Amanda C. Bright is a former professional journalist who later spent a decade as a scholastic journalism adviser of both newspaper and yearbook in Illinois. Currently, Bright is a journalism instructor at Eastern Illinois University and the Media Content Coordinator for Indiana State University Online; she also serves as the Social Media Director and Web Co-Administrator for the Illinois Journalism Education Association.