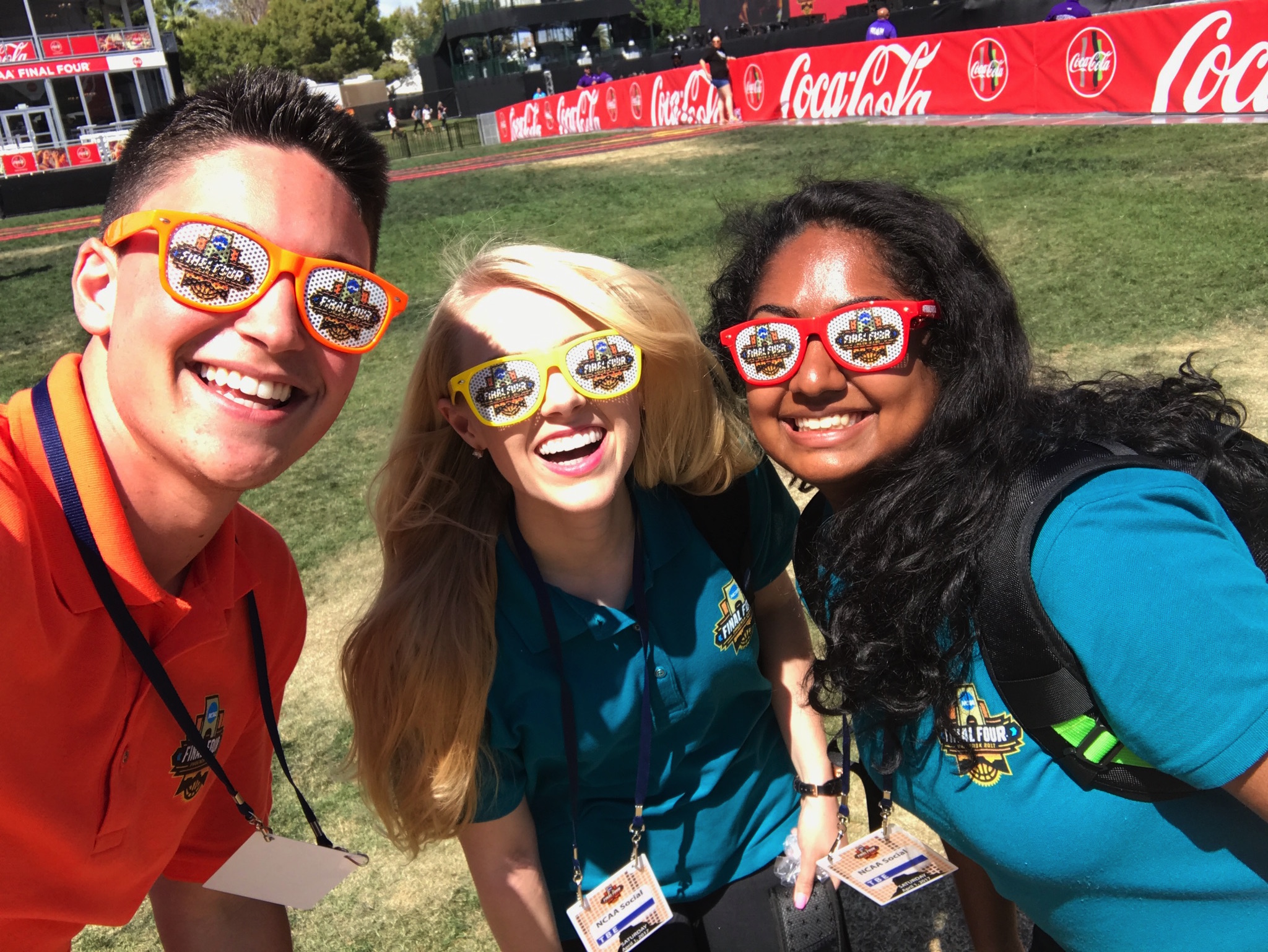 The NCAA Men’s Basketball Tournament is a huge production. In Phoenix for the Final Four last month, the NCAA called on the Walter Cronkite School of Journalism and Mass Communication. Students answered.

The NCAA asked students to assist in content curation for the Final Four’s social channels. I took on the role of assistant publisher. I learned a lot along the way, including my Final Four Takeaways.

Social media is an infinitely large platform that lends itself to authentic, relatable content that connects directly with your audience.

The 25 students on the social media team were divided into teams to cover events, and then submitted content back to the social hub for review/editing before it was pushed out to social accounts.

The students participated in a legitimate professional experience that generated quality social content for the NCAA and yielded impressive results: Our content reached 9.4 million on Facebook and Twitter combined, and yielded 1.2 million video views from March 27 to April 3.

“The biggest takeaway from this event was how many people it takes to make something like this successful and also people in these higher up positions really do want to help students,” she said. “They were willing to give feedback and it was really great to see that.”

A designated team produced 360 video content through the week, and Facebook loved this content. Any day that we posted one, it would have the highest organic reach of that day. A 360 video of students riding the free pedicab service around downtown Phoenix reached 27,000 people.

Through my social media experience at Cronkite News, I know that different forms of content are great to keep the channels from looking repetitive and to see what your audience likes best. I have never done a 360 video, but I learned that if you have the tools to do so, your audience will thank you for it.

We did numerous live hits throughout the weekend, and analytics-wise they were goldmines. However, the finished product doesn’t show just how careful the preparation was. One tricky area to navigate for those going live was the sponsorship messaging. Big events mean big sponsors, and a slightly off phrase surrounding their approved product/promotional tagline means big, big trouble. Another issue that arose was alcohol consumption. Though drinking was permitted at the March Madness Music Fest, we were not permitted to show it on our channels.

During a great live hit from student Chancellor Johnson, who became our go-to live guy, two college-aged men came up to him and the camera with beers in hand. The hit had to be instantly cut and deleted from our page. Not the fault of Chance, as situations like that can happen very quickly when you are live.

“Being able to go live, I was a little nervous at first,” Johnson said. “I think I eventually did five live hits total, and each one I felt more more comfortable.”

4. Social Media is Made for Journalism

A local Phoenix station interviews Loni Bryantt about her experience on the NCAA social media team.

Journalists tell stories through photo, video, interviews, and text and that is exactly what we brought to the social media accounts. At the Cronkite school, we study writing extensively. Clear, active, and engaging writing simply becomes a way of life for us. We also have knowledge of simple basics like taking a good photo, (hold your phone horizontally!) Along the way we also learn video editing, gif making etc. These skills translate perfectly into having an engaging social media account.

Social media is an infinitely large platform that lends itself to authentic, relatable content that connects directly with your audience. What more can you ask for as a journalist?

Loni Bryantt is originally from North Dakota, and is a senior at the Walter Cronkite School of Journalism and Mass Communications at Arizona State University. She is pursuing a career in PR/social media.