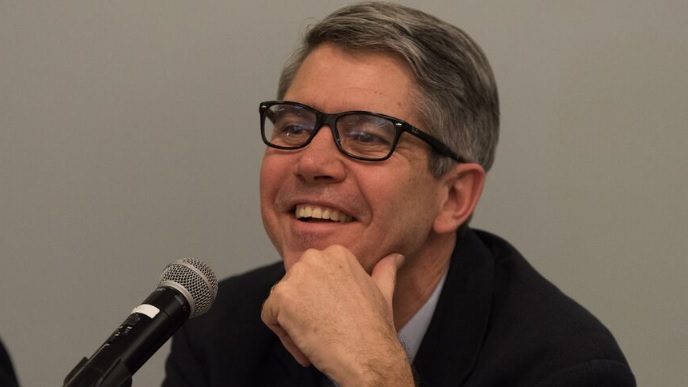 Kyle Pope, editor-in-chief and publisher of the Columbia Journalism Review, joins us on this week's podcast.

In the news this week, Google has been subject to an advertising boycott in the U.K. by various brands who don’t want to be seen next to extremist videos on YouTube. The tech giant announced better controls for advertisers in a bid to win them back. Turmoil hits alt-right news sites, as the FBI investigates their connection to Russian hackers during the election, and three staffers are suspended by the Independent Journal Review, and one resigns, for spreading fake news. A new study shows that who shares a story on social media affects trustworthiness more than which news outlet published the story. Our Metric of the Week is Chatbot Metrics, and we’re joined by Kyle Pope, the feisty new publisher and editor-in-chief at the Columbia Journalism Review.

"We have a president that has used every seventh-grade adjective you can think of to describe the press. We're being aggressive about the way we cover it." - Kyle Pope on the CJR's coverage of Trump

Kyle Pope is editor in chief and publisher of the Columbia Journalism Review.  Previously, he worked for a decade at The Wall Street Journal, was editor-in-chief of The New York Observer and deputy editor of Conde Nast Portfolio magazine.

Google Responds to an Ad Boycott in the U.K. with More Controls

While a Parliamentary panel in the U.K. offered a tongue-lashing at Google for not doing enough to pull down hate speech, it took a boycott by major advertisers to get Google to take real action. On Tuesday, Google’s chief business officer Philipp Schindler announced they were going to give marketers more control over their online ads, and expanded their hate speech definition to include discrimination based on identity, socio-economic class or country of origin. Schindler wrote in a blog post that, “We know advertisers don’t want their ads next to content that doesn’t align with their values. So…we’re taking a tougher stance on hateful, offensive and derogatory content.” Google also will make a safer default for brands so that it excludes objectionable material from the start. The tech giant also pledged to hire more people to review more content while using more artificial intelligence and machine learning to ferret out bad actors.

You’ll remember that Google was in hot water after a Times of London article found ads on YouTube videos promoting extremist views. It turns out L’Oreal, the Guardian, and British grocery chain Sainsbury’s didn’t want their brands associated with white nationalism, homophobia or anti-Semitism. The companies couldn’t get Google to take serious action, so they pulled advertising from the company, which led to other advertisers joining suit, including French ad giant Havas. Why did the boycott work so quickly? As Bloomberg’s Mike Bergen noted, nearly 8.6% of the tech giant’s sales come in the U.K., and one stock analyst had downgraded the its stock after the boycott. The stock lost 2% of its value earlier this week. Will these changes be enough to mollify the boycotters? Google will still have to face Cabinet officers in the U.K. to explain their plans in greater detail. For so long, tech companies have been able to hide behind their status as neutral platforms but as they grow ever more powerful, they’ll need to focus their computing — and human — power on solving problems with hate speech or pay the price.

Right-Wing Sites Are in Turmoil, as the FBI Investigates Ties to Russian Hackers

The FBI is looking into whether far-right news sites worked with Russian operatives to spread misinformation during last year’s election, according to a report from McClatchy’s Peter Stone and Greg Gordon. Investigators are trying to determine whether the sites played a role in “bot” attacks that flooded social media with pro-Trump or anti-Hillary fake news stories. Former Pentagon official Mike Carpenter told McClatchy that “Russian bots and internet trolls sought to propagate stories underground… those stories got amplified by fringe elements of our media like Breitbart.” This is part of a larger investigation into Russian interference in the presidential election. FBI director James Comey confirmed the agency was investigating the Trump campaign’s possible links to Russian hacking during the election campaign. One of the investigation’s priorities will be to find who provided hacked emails to WikiLeaks.

Meanwhile, the millennial-focused conservative publication Independent Journal Review is having a rough week. The IJR should have been celebrating as it was the only publication to be granted access to Secretary of State Rex Tillerson on his trip to Asia. Earlier this week, IJR reporter Erin McPike tweeted she was working on a “longer story” on Tillerson and couldn’t file short updates from the road. Eventually, the IJR relented after public pressure and McPike did file a few short stories but those were overshadowed by another developing scandal. Without providing evidence, the IJR published and ultimately retracted a story that insinuated a link between former President Obama’s trip to Hawaii and a federal judge blocking the new travel ban. Joe Perticone, IJR’s congressional reporter resigned while three other IJR staffers were suspended. We’ll see how these stories play out as newly empowered alt-right publications hit some serious rough patches.

A Study Shows that Who Shares a Story Affects Trustworthiness

It used to be a given that people trusted news based on the reporter or news organization who published it. But in the social media age, that might not be the case. According to an interesting study by the Media Insight Project, it’s the people who share the news story who have a bigger effect on trust than the actual news source or brand. The experiment involved 1,400 Americans, who were shown a simulated Facebook News Feed and asked to rate articles, which were shared by people they trusted and didn’t trust. If an article was shared by someone they trusted, 51% of respondents believed it was well reported, but that number dropped to 34% if the story was shared by someone they didn’t trust. Just how important is the sharer of the story? The study found that nearly half of people will think a story is accurate if the sharer was trusted but it was attributed to a fictional news source vs. 32% when it was attributed to the Associated Press, but shared by someone they don’t trust.

So how can publishers deal with this new power of sharers on social media? According to the report, which is a joint effort between the American Press Institute and the AP-NORC Center for Public Affairs Research, publishers need to consider sharers as “brand ambassadors” who have a lot of power and should be nurtured. The other issue is with fake news, as it means that trusted sharers would have a much easier time sharing fake news from questionable sources. The study found that 19% of people would recommend a fictional news source to a friend, based on trust for the person who shared it. And finally, what about the responsibility of Facebook? The authors of the study suggested that social platforms need to do a better job providing information about the sources for stories that are shared. Only 2 in 10 people in the study could even recall the name of the news source. This is something that Facebook is addressing somewhat in its new tagging for fake news, but it will also need to highlight trusted sources even more.