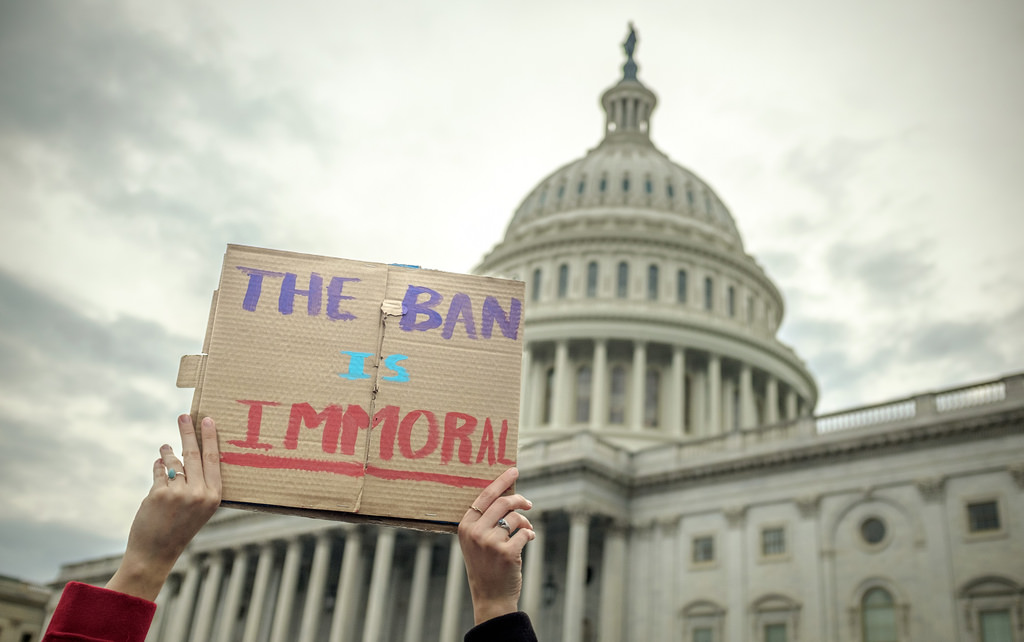 After Donald Trump's executive order banned travelers from seven predominantly Muslim countries, travelers from other countries were affected too, including a woman barred from entry from Canada when border patrol agents found videos of people saying prayers in Arabic on her phone. Photo courtesy of ep_jhu on Flickr and used with Creative Commons license.

Citizens in both Cameroon and Iraq are growing ever-more accustomed to Internet shutdowns. Cameroon instituted restrictions on Internet access on January 17, after months of protests concerning the economic and cultural marginalization of English speakers in the predominantly French-speaking West African country. Protests have led to mass arrests and what the UN High Commissioner for Human Rights has called “excessive force” used by Cameroonian law enforcement against protesters. Meanwhile, the Internet has been inaccessible in these regions for over three weeks. The shutdown is having detrimental effects on businesses, technology companies and day-to-day life. According to digital rights advocacy groups Internet Sans Frontières and Access Now, the first 15 days of the shutdown cost Cameroon the equivalent of USD $723,000.

Iraq’s outages were more sporadic, with four one-hour outages observed between February 1-6. The outages coincided with 6th grade placement exams, and mark the third year in a row in which authorities used Internet shutdowns to prevent students from cheating on their tests. This year’s one-hour shutdowns were shorter in duration than last year’s, which occurred ten times over the month of May and lasted three hours each time.

The UN Human Rights Council passed a non-binding resolution in June 2016 condemning such measures, saying that “the same rights that people have offline must also be protected online, in particular freedom of expression.”

Although Trump’s executive order on immigration technically applies only to non-US residents from seven countries in the Middle East and North Africa, travelers from other countries are reporting that they are being questioned about their faith and asked to hand over their mobile phones to border patrol agents. On February 4, a Moroccan-born Canadian citizen, who is Muslim and wears a hijab, was turned away at the US-Canada border after agents searched her mobile phone and found videos of people saying daily prayers in Arabic.

“You’re not allowed to go to the United States because we found videos on your phone that are against us,” the woman was told.

The new U.S. Secretary for Homeland Security John Kelly says that border patrol agents may begin asking travelers from the seven countries affected by the order to hand over their email and social media credentials as part of security procedures. In an interview on National Public Radio, Kelly said this could be expanded to travelers from other countries as well.

Practicing Law in Algeria? Time Go Get Off Facebook.

Lawyers in Tlemcen, Algeria can now face suspension and “correctional” measures if they use social media, according to a statement released by the head of the Tlemcen Bar Association. The decision follows criticism by the president of the Algiers Bar Association, Abdelmadjid Sellini, of lawyers’ “abusive” use of Facebook in the city. Sellini also said he intended to take “necessary” measures against lawyers who he believes could harm the profession by their use of social media.

In China, law enforcement agencies are arresting citizens who insult them on social media. Photo by Lei Han on Flickr and used with Creative Commons license.

Chinese police are arresting netizens who insult law enforcement officials on social media. At least six people have already been detained, according to Radio Free Asia, and at least one them has been accused of violating China’s Public Security Administrative Punishments Law for posts on Weibo criticizing a police officer who was killed in the line of duty. The law, which took effect in 2006, creates a category of offenses can be punished with administrative penalties and issued by police without judicial review.

Two Ukrainian men were sentenced to five years in prison for “supporting separatism” in posts written on VKontakte. The men were arrested in April 2015 and found guilty this week of organizing groups that supported separatist activity in February 2014, shortly after the EuroMaidan Revolution. They follow at least two other cases in which social media users were prosecuted for online speech supporting separatism.

Detained Jordanian Journalist Tayseer al-Najjar appeared before the UAE’s State Security Court on accusations of insulting the Emirati State on Facebook. Al-Najjar allegedly published posts on Facebook criticizing the Emirati position in the 2014 Israeli War in Gaza, but he did this while living in Jordan. Global Voices’ Afef Abrougui writes, “What is troubling about Najjar’s case is not only that he is being prosecuted for merely expressing his opinions, which is not uncommon in the UAE, but also for statements he made before he moved to the country.” He was detained in December 2015, held incommunicado for nearly two months, and remained in pre-trial detention for over a year.

In India, software developers are building a campaign to increase public understanding of online privacy issues. Photo by Juan Antonio F. Segal on Flickr and used with Creative Commons license.

The free and open source software communities in India built a campaign to increase public understanding of online privacy issues, including the launch of January Privacy Month and a hashtag #PrivacyAware campaign to engage with participants. The effort is particularly critical given the dearth of online content in dominant languages of India such as Hindi, Bengali and Tamil, which leave Indians particularly vulnerable to online security threats.

The Open Observatory of Network Interference has built a mobile app for iOS and Android that allows any user to monitor blocked websites and network performance and publishes data collected by users for its open data archive.