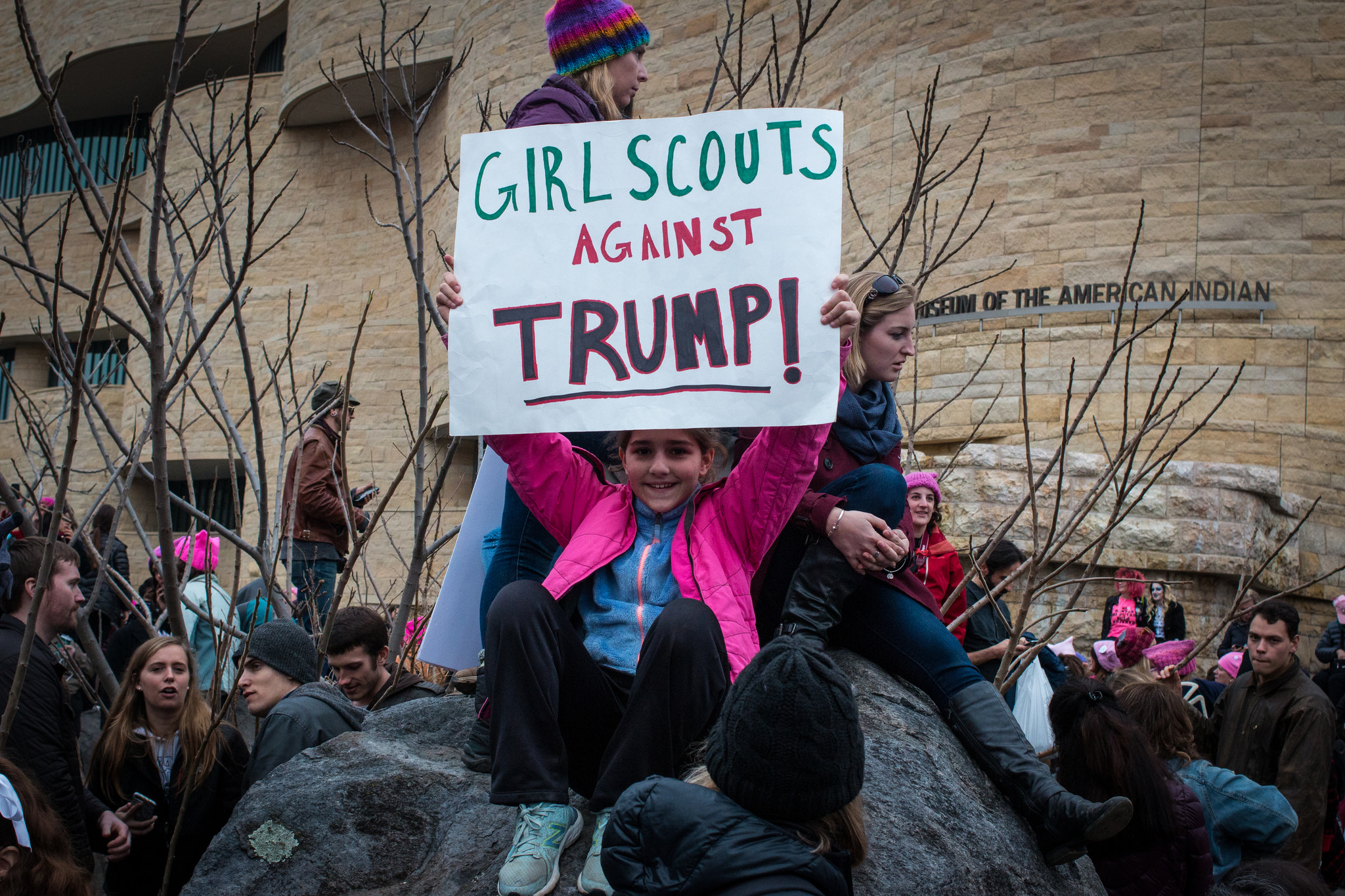 An image from the Women's March in Washington, D.C. Photo by Liz Lemon on Flickr and used with Creative Commons license.

Less than a week into Donald Trump’s presidency, state legislators have introduced a smattering of anti-protest bills, four federal agencies have been placed under a media gag, and Trump staff have lambasted media over their coverage of the inauguration and anti-Trump protests.

The media gag on federal agencies — and the response on Twitter

On January 24, an anonymous source from within the Environmental Protection Agency (EPA) told reporters that, along with other federal agencies, EPA staff had been ordered to decline all press requests and to stop posting on their blogs and social media feeds until further notice. The EPA was also instructed to remove climate change-related content from its website.

The Department of Interior received a similar order coinciding with a flurry of activity on Twitter accounts associated with the National Park Service, which falls under the Department’s jurisdiction. Following the Trump administration’s social media ban, the official Twitter account for Badlands National Park in South Dakota posted a series of tweets citing scientifically-proven climate change data, which were deleted shortly thereafter. Since January 24, an account called @AltNatParkSer that claims to have been launched by park service employees but has since been handed over to a group of journalists and climate scientists, has swiftly accumulated over one million followers. The account is mostly tweeting climate change data, interspersed with critiques of the new president.

‘The most dishonest human beings on earth’

Trump directly attacked the media in his first publicly broadcast speech, in which he addressed CIA employees and other intelligence officials on national security issues, including allegations of Russian hacking of party servers and voting machines. In the speech, he described the media as being “among the most dishonest human beings on Earth.”

This kind of antagonism may leave reporters feeling uncertain about how to cover Trump, especially for those who fear that the White House may cut communication with media outlets altogether.

National Public Radio, a liberal-leaning broadcast service that depends on public funding, has pledged not to use the word “lie” to describe untrue statements uttered by the president, reasoning that a lie is defined as “a false statement made with intent to deceive,” and that they cannot prove (in most cases) that Trump’s false statements are intended to deceive the public. Reporter Mary Louise Kelly was criticized by listeners after she refrained from using the word in a recent broadcast.

Meanwhile, as both Trump staff and conservative media organizations cast doubt on the reported size of protest crowds that gathered in over 600 cities across the country, state legislators have ushered in new bills that would infringe rights to protest by raising fines for blocking roads in Minnesota and North Dakota. The bill introduced in North Dakota would absolve motorists who hit or kill protesters standing or lying down in roadways, if they do so accidentally.

‘America, you look like an Arab country right now’

A response to the week’s developments (and a useful segue for our Netizen Report) came from Lebanese political commentator Karl Sharro who says that the US “looks like an Arab country right now.” In a satirical piece for Politico, he wrote:

From blaming the press for engaging in secret conspiracies to undermine him to threatening their access to his White House palace to refusing to take questions from certain reporters, President Trump reminds us of several of our own leaders. In fact, an Arab leader complaining about CNN coverage is pretty much a staple of our political life…The not-so-veiled threats by the president and Mr. Spicer to the media are very much in the spirit of Arab governance.

The Internet shutdown in English-speaking Cameroon

Citizens of Cameroon have been without internet access for over a week. Photo by Jake Stimpson on Flickr and used with Creative Commons license.

Citizens in the predominantly Anglophone regions of Northwest and Southwest Cameroon have been without Internet access for over a week, after months of protests concerning the marginalization of English speakers in the predominantly French-speaking West African country. Protests have led to mass arrests and what the UN High Commissioner for Human Rights has called “excessive force” used by Cameroonian law enforcement against protesters. The Internet shutdowns follow the arrests of two prominent Anglophone advocates and civil society organizations’ calls for a “ghost town” action, in which citizens stayed home from work and school and otherwise refrained from public activities.

Systematic trolling on Twitter has become a top concern among journalists and human rights defenders in Mexico. Amnesty International released a dispatch this week from Mexico City, where a leading expert on the issue described how a “repentant troll operator” approached him and confessed that she was paid the equivalent of USD $2500 per hour to run a Twitter accounts that generated a counter protest in the face of citizen demanding justice for the 43 students who disappeared in Ayotzinapa in 2014.

China’s Ministry of Industry and Information Technology announced it will require all virtual private network service providers to obtain government approval if they wish to continue operating. This will render illegal most of China’s VPNs, which many in the country use to circumvent the Great Firewall. The Ministry’s move is part of a 14-month “clean-up” of Internet access services, according to CNN, that will run through March 31, 2018.

Russian online wallet service Yandex.Money will stop allowing transfers of money to individuals for “political purposes.” Critics see the move as an attempt to stop opposition politician Alexei Navalny from using the service to crowdfund his 2018 presidential campaign. Once the policy goes into effect, the only remaining way Russians will be able to donate to the campaign will be through PayPal.

There are concerns that mobile messaging may be blocked in Iran during the country’s upcoming election. Photo by David Stanley on Flickr and used with Creative Commons license.

Hardliners in Iran are pressuring President Hassan Rouhani to block access to the messaging app Telegram ahead of May 2017 presidential elections. Rouhani has not yet responded to the request, but resisted similar pressure approaching the February 2016 parliamentary elections. Officials have cracked down heavily on Telegram channels and users recently, arresting 32 people in Hormozgan province for allegedly using the channels to “spread lies, disturb public order, create fear and promote immoral and anti-cultural material.”

On 19 January, a Kuwaiti court acquitted activist and Twitter user Sara al-Drees of insulting the country’s ruler. Al-Drees was tried for comments she made on Twitter about a pardon she received for a previous jail sentence she was serving, and for insulting the Emir.

UAE academic and economist Nasser Bin Ghaith is suffering serious medical problems in jail, where he has been denied medical treatment while in solitary confinement, and was refused access to winter clothes. He has been held since August 2015, for tweeting critically about Egyptian authorities’ 2013 violent crackdown on protesters gathering at Rabaa Square. His trial has been postponed to February 22.

Algerian journalist Hassan Bouras was given a six-month suspended sentence on accusations of “contempt of court, offense and defamation” for investigating corruption allegations in the town of El Bayadh. He was released from jail after his sentencing, and plans to appeal the decision.