Turning Uncertainty into Magic: How We Won the Women’s IoT Makeathon 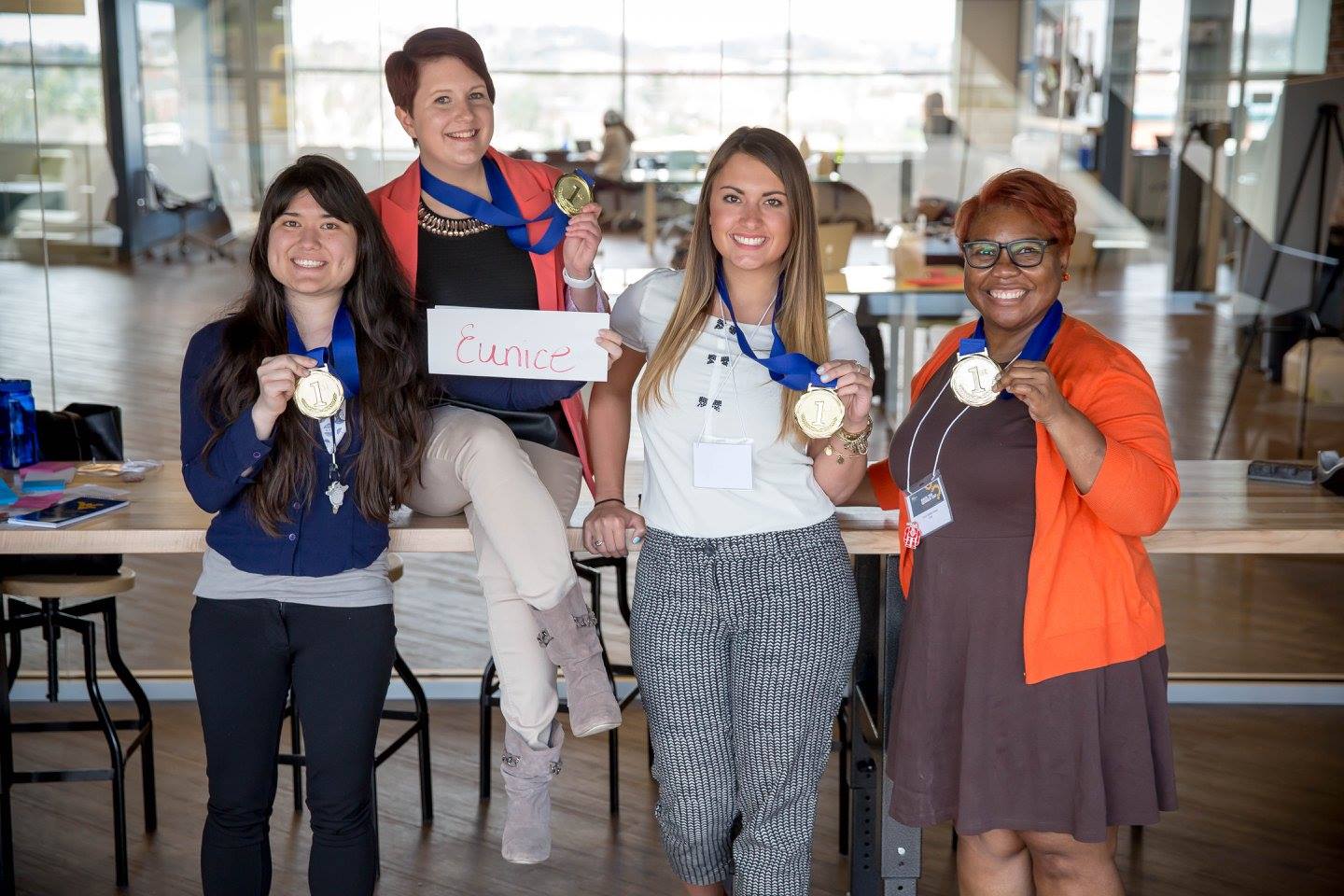 Members of the Team Clothespin posing with their medals after winning the Hack the Gender Gap: Women's IoT Makeathon at WVU. Photo by David Smith / WVU.

It’s a running joke among my friends and family that I am technologically challenged. I have even been known to struggle with operating our game-room television — which we have owned for more than 10 years.

So imagine my uncertainty when I registered for a weekend-long Women’s IoT Makeathon at West Virginia University’s Media Innovation Center on April 1-3. I wasn’t familiar with the maker movement or any of its mantras. “Makers gonna make”? What did that mean? What exactly was I going to make? But I am a people person and a leader who is willing and determined to learn.

I may not have known what to expect when walking into the Makeathon, but I was certain of three things:

1) I would take away an experience of a lifetime.

2) I would be surrounded and mentored by prominent female leaders in the journalism and media industry.

3) I would get to work with and learn from dozens of other college-aged women.

What could be better than that?

I eagerly arrived at the Media Innovation Center just before 8 a.m. on Saturday, April 2. I anticipated a long, work-filled day, but I didn’t know exactly what to expect.

I am a planner. I like knowing every detail about every situation, so not knowing the challenge was driving me crazy. I received my name tag, along with a small purple clothespin, and learned I was on Team Clothespin. Before heading for the coffee line, I scanned the list to see who was on my team. I did not recognize any of the names.

And then they announced the challenge: Our job as a team was to envision, map and pitch a startup use in the Internet of Things/“smart world” landscape. The catch is that we had to make something that would solve a problem relevant to the journalism and media industry. We had about 30 hours in which to do this before we would present our solution to a panel of judges.

Photo by David Smith of The Reed College of Media.

To get things started, our team began with an icebreaker of two truths and a lie, which got everyone warmed up to each other rather quickly. Among us were two journalism students (Trista Thurston of Ohio University and Eunice Lee of Northwestern University), a computer science student (Rebekah Kambara of West Virginia University) and a strategic communications/advertising student (me, also of West Virginia University). Tanya Ballard Brown, a digital editor at NPR, was our mentor-facilitator.

We began a task that everyone loves to hate: brainstorming. We discussed target after target, problem after problem, product after product, and still nothing. We went from focusing on zero waste to recycling to cereal box prizes.

Before we knew it, it was time for lunch. We still had nothing.

Then it was time to hear from Christine Sunu, the GE fellow in BuzzFeed’s Open Lab for journalism, technology and the arts. That is when my team really got inspired. Sunu spoke about the Internet of Things (IoT) in media and journalism and how IoT can make life more magical.

That was it! Making life more magical.

At that point, we shifted our focus to finding a simple and practical solution to a problem that many people face every day: managing their money.

And that’s how CARDful was born.

The problem: College students and recent college graduates struggle to manage their money and maintain budgets. Oftentimes, they find themselves overspending without realizing it until it is too late.

Our solution: CARDful, a card with a color-coded interface paired with a mobile application that makes consumers aware of when, how and what they are spending. Designed to help college students and recent graduates “adult,” the card would help them manage money at the point of purchase, all while receiving rewards and user-friendly financial and business content from media partners.

Our team was lucky enough to have strengths that complemented one another. Once we came up with our idea, it was a no-brainer as to who would focus on what. We knew we needed a cohesive story. We wanted to be sure that in our five-minute pitch to the judges that we would effectively touch on our research, target market, product specs, IoT tie-ins, marketing, budget and partnerships.

Members of Team Clothespin working hard on their product, CARDful. Photo by David Smith of The Reed College of Media.

By noon on Sunday, it was time for presentations from all eight teams. I was amazed at the thorough and interesting products and solutions that other teams pitched.

Pitching CARDful to the judges and audience felt as though we were on our own real-life episode of “Shark Tank.” It was exciting and nerve-wracking and seemed to go by in the blink of an eye.

After all eight presentations, we anxiously awaited the judges’ decision. When they came out of their deliberation, the judges discussed the strengths of every team and then announced CARDful as the winning idea. Overjoyed and honored, my teammates and I jumped out of our seats smiling and ready to claim our medals. I cannot be more proud of Team Clothespin and CARDful.

By the end of the event, I no longer felt uncertain about being involved in the Makeathon. I was confident and lucky to be among such talented and driven women. The experience inspired us all to be creative and to think up what seemed impossible from the start.

All photos by David Smith / WVU.

Antoinette (Toni) Yelenic is a senior student in The Reed College of Media at West Virginia University. She is majoring in strategic communications with an emphasis in advertising and dual minor in business and event planning.