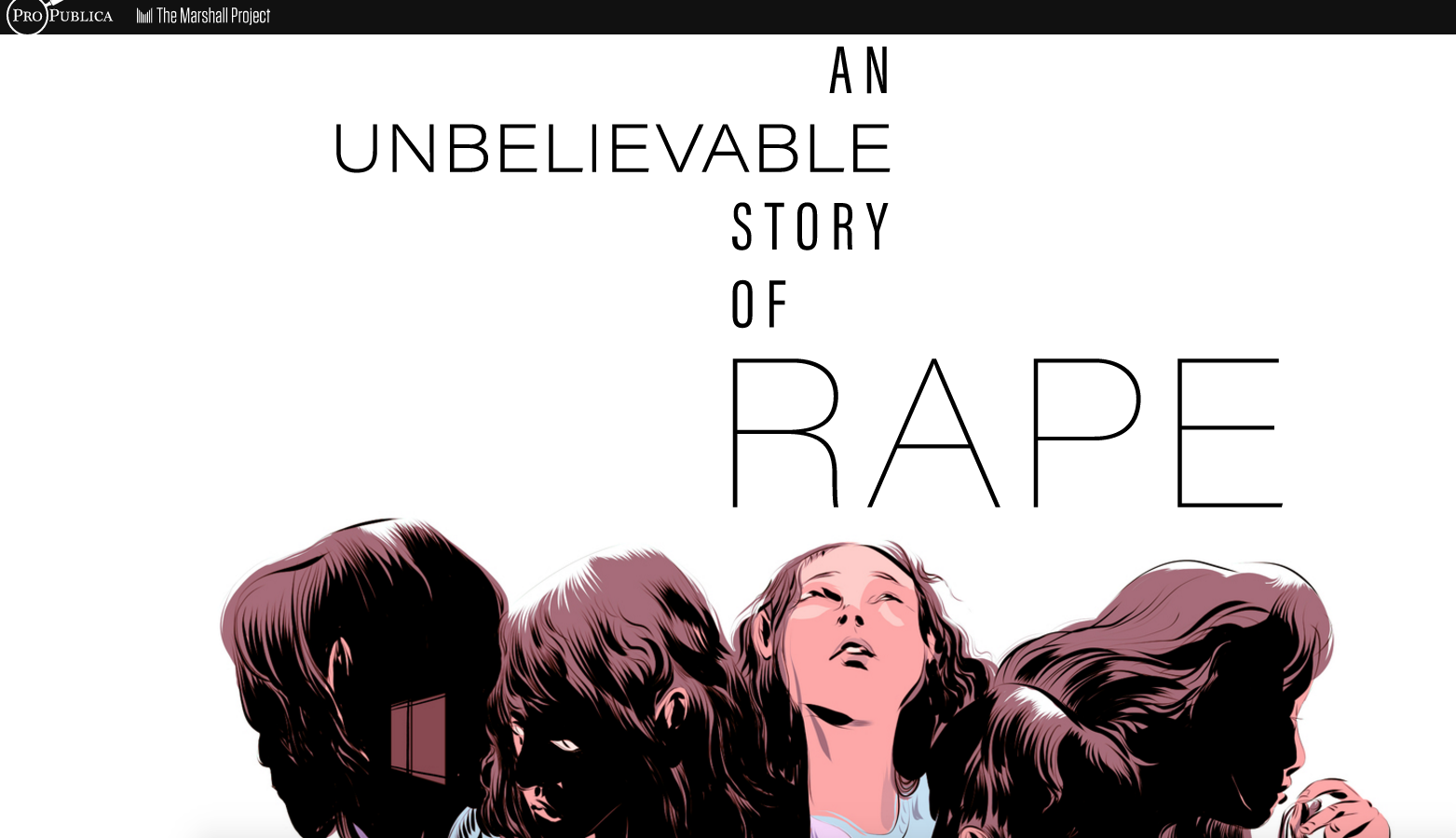 "An Unbelievable Story of Rape" won the Pulitzer Prize for Explanatory Reporting, and was a collaboration between T. Christian Miller of ProPublica and Ken Armstrong of The Marshall Project.

In this week’s news, the Pulitzer Prizes honored a non-profit collaboration between ProPublica and The Marshall Project. NPR is trying to experiment with viral audio, but can it adapt to digital fast enough? The New York Daily News fires an editor over attribution problems. Our Metric of the Week is video views, and Mark Rants & Raves about Curt Schilling’s dismissal from ESPN over controversial memes, and we talk to The Atlantic’s Matt Thompson.

"Did the story pull you into something larger, pull you into the world in an interesting way?" - Matt Thompson on the most important metric for any story

Matt Thompson is deputy editor at The Atlantic. Prior to The Atlantic, he was editorial product manager at NPR, where he helped to coordinate the development of 12 niche, local websites in conjunction with NPR member stations.

This year is the 100th year for the Pulitzer Prizes, and most journalism winners typically come from newspapers. But the Prizes have evolved somewhat, honoring digital-only outlets such as Inside Climate News and the Huffington Post in the past, and allowing magazines to enter now as well. This year, there were two digital winners of note. ProPublica and The Marshall Project won a joint award for explanatory reporting on a serial rapist and one of his victims. The two reporters realized they were chasing the same story and decided to collaborate. And the Washington Post won a National Reporting award for creating an insightful database on police shootings and their victims around the country.

And there was another great example of collaboration between the Sarasota Herald-Tribune and Tampa Bay Times in reporting on lapses at mental health hospitals in Florida. The report won the Investigative Reporting prize. Benjamin Mullin at Poynter says the Pulitzers could be even better, saying they should also include broadcast outlets and give the audience some input on who wins. At 100 years old, the Pulitzers probably won’t move that fast, but we have to give them some credit for including non-profits, digital outlets, data journalism work and collaborations between newsrooms. All of those are signs of hope for the Pulitzers and legacy media, as well as for the public who depends on watchdog journalism.

What’s the Future of Audio and NPR in the Digital Age?

In the past month, there has been quite a bit of consternation in public radio. It all started with a memo published in NPR’s ethics handbook that instructed hosts not to promote the NPR One app on the radio. Then came the Twitter reactions and the Facebook posts, counters-posts and think pieces. And there was a deep story from Slate’s Leon Neyfakh, “The Fight for the Future of NPR,” detailing the talent exodus to podcasting. But even if they’re slow to embrace digital distribution, NPR is working on it. This week, NPR’s Serri Graslie published an article on Nieman Lab detailing their experiments with Facebook’s audio player. In the month-long experiment, Graslie learned that breaking news and archival pieces get the most traction on Facebook, especially with a good visual. But they still haven’t found the perfect length for audio clips yet.

And what about that old standby for audio, the radio? Nieman Lab’s Laura Hazard Owen learned that even in cars, terrestrial radio is taking a back seat to Bluetooth connected phones and dedicated Internet access. The numbers are stark for radio, with Edison research finding that 32% of Millennials don’t own a radio at home. And streaming audio is catching up and surpassing radio listening among the younger generation. It’s possible that as Millennials get older, they’ll commute more by car and start listening to more radio. But the reality is that many habits are started at younger ages and in college, and if streaming music and time-shifted news podcasts become the norm for people, they’ll likely want that in their cars too. That means that NPR, and radio stations at large, will need to continue to reach more people where they are — with apps, podcasts and streaming audio — and yes, even on Facebook.

Attribution. It’s one of journalism’s most basic rules, and if you break it you can expect to be sent packing. That’s certainly what many people thought was going to happen to the New York Daily News’ Shaun King after he was accused of plagiarism by an editor at The Daily Beast. The evidence looked damning, with two paragraphs in a recent column looking like they were lifted straight from a story at The Daily Beast, and yet another column had a paragraph lifted from a FiveThirtyEight story. Open and shut case, right? Not so fast. The lack of attribution was the result of “a series of egregious and inexplicable errors” by New York Daily News editor Jotham Sederstrom, who has since been fired. Sederstrom said in a post on Medium that he takes full blame and that his lapses were inexcusable. But he does note that he was overworked and had to edit roughly 20-plus stories per day, which could lead to problems.

And the bad news for the Daily News doesn’t stop there. A story by Kate Feldman contended that St. Louis Cardinals fans used the “N-word” repeatedly when Jason Heyward returned to play in St. Louis for the rival Chicago Cubs. Unfortunately, the story was based on a series of tweets by people who might not have even attended the game. Feldman said that the crowd mics picked up the racial slurs on TV broadcasts, but Deadspin checked all the audio on all telecasts and never heard anything. After a round of criticism, the Daily News had to edit the story, but it didn’t offer a correction. There was a time when you could get away with this kind of hurried, sloppy reporting, but with the Internet and social media, reporters and editors will get called out time and time again.

Former Major League Baseball pitcher Curt Schilling is known for gutting out a playoff game in 2004 for the Red Sox despite a bloody ankle. In his post-baseball career, he’s known as a prominent TV baseball analyst for ESPN as well as an outspoken conservative on social media. He recently shared a meme on his Facebook account slamming transgender people for using bathrooms of their gender identity — something that has been in the news with a recent law in North Carolina forcing trans people to use the bathrooms of their birth gender.

That meme, and his comment that “A man is a man no matter what they call themselves” led to his firing by ESPN. Was that an overreaction by ESPN? Not exactly. Schilling has been building toward this day for some time, ever since comparing Muslims to Nazis in a previous meme that got him suspended from ESPN and removed from his plum assignment on Sunday Night Baseball. And his Facebook page has been something of a conservative meme factory, one after the next, provocative and perfect if you were a conservative radio host. But not if you were a baseball analyst at ESPN.

Yes, Schilling and every other journalist or broadcaster have free speech rights and can share their personal thoughts with the world however they like. But news organizations, and really, just about any company or institution, knows that those personal thoughts ultimately reflect on the organization as a whole. When we watch Curt Schilling on ESPN, we’re thinking about his thoughts on a pitch or baseball strategy, and we’re not wondering about his thoughts on politics. Once he crosses the line into vocal political advocacy, whether it’s conservative, liberal, anarchist or otherwise, it changes our perception and changes the way people view him (or stop viewing him) on that network.

Unfortunately, ESPN is also to blame for its inconsistent policy on social media posts by its broadcast personalities. It obviously has a difficult balancing act, because it wants hosts to be provocative, stir things up and cause controversy, which leads to good ratings. But where do you draw the line between provocative and bad taste? Between tweaking the establishment and being politically correct? ESPN does have social media guidelines, and, according to Deadspin’s Kevin Draper, the guidelines say that employees must “exercise discretion, thoughtfulness, and respect for your colleagues, business associates and our fans.”

But Schilling broke those rules over and over, and he still remained an analyst on ESPN and has been a regular on Monday Night Baseball — until now. The problem is that ESPN might be giving leeway to a popular personality, letting him get away with Facebook memes while others don’t have that luxury. Having uneven rules leaves everyone there in the dark about what’s allowed and what isn’t.

Firing Schilling gets rid of one out-of-control meme machine, but where does it leave the rest of ESPN’s commentators? It will be interesting to see how ESPN’s outspoken ombudsman, Jim Brady, addresses this issue in the weeks ahead. And what the most powerful sports network does will be watched closely by other news organizations in a similar bind.

Now let’s get back to what Schilling did, and what so many people have done before him: posting on Facebook as though it were a different medium, a personal platform without repercussions. By now, you’d think it was obvious that what you post on Facebook, on Twitter, by email, by text — really any electronic format — will live on forever. Social media is just another megaphone, another way to reach everyone, another broadcast mechanism.

So it’s best to treat it that way, and remember that the little blank box on Facebook, asking “What’s on your mind?” is not an invitation to really share everything that’s on your mind. It’s a window into the world, the whole world, and they’ll be listening and waiting for you to take a misstep, to post the wrong thing, leading to your disgrace and downfall.