May the Audience Be With You: How USC Students are Learning the Ways of Social Media 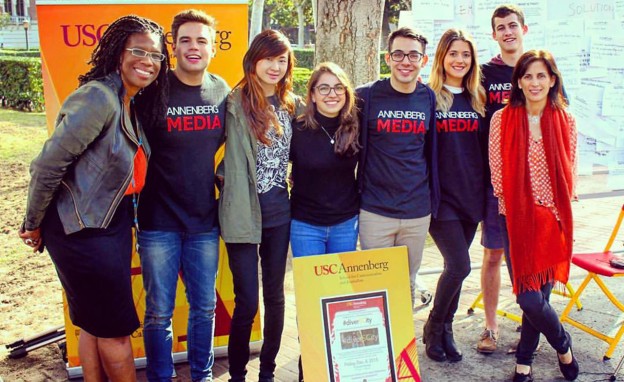 As we started the JEDI desk at the University of Southern California in the Annenberg School of Communication and Journalism, we knew we had to go all in.  There was no try.

“Before this, I didn’t know careers existed in this and that media organizations were dying to crack the code behind mobile and social native content. I learned a lot.” - Fernando Hurtado

It all started when students and faculty saw a need to better engage audiences. Broadcast videos being posted to Facebook weren’t working well on social media. These weren’t the results we were looking for.

It was December 2014. After I had a few informal chats with USC Annenberg Media student executive producer Fernando Hurtado, we moved forward and set up formal meetings. Annenberg Media Center faculty adviser and professor Rebecca Haggerty joined us as we discussed digital strategy.

It was a perfect mix. Hurtado was an uber-talented journalism student with fresh perspectives and Haggerty would represent the USC Annenberg Media Center faculty with an impressive background in broadcast journalism. We were going to start this thing called the mobile and emerging platforms unit.

As a former student news publications adviser and a digital professor at USC, I was interested in working with the Media Center to reach millennials and create engaging digital content while experimenting and pushing boundaries.

How could we better work with platforms that most of our audience and students at USC were using?  We met almost weekly. We looked at analytics. Yes, there were what the numbers were telling us. But we also saw a huge need to develop content our audience was consuming on mobile devices and social media platforms. We needed to produce compelling stories that our audience could easily access. We wanted to go to where they were. We wanted work to be “shareable,” but what did that look like? Everyone loves cute, fluffy cats jumping around, but our students produce news, among other types of content. What did our fluffy cats look like?

USC Annenberg Media’s Facebook page has more than 30,000 likes, in part due to the efforts of the JEDI desk.

May the audience be with you

With the support of Annenberg Media Center executive director Serena Cha, Hurtado formed a unit of student volunteers in the Media Center during the spring 2015 semester. He and other students experimented, particularly with video, looking for the formats that would work best for the content he and the students wanted to create. Haggerty oversaw the team in the Media Center and spent countless hours working with students and developing the team.

At the end of the semester, it was clear the team had momentum. This team was growing at galactic proportions. We needed to create a class to give students time and space to meet, brainstorm and strategize.

We were beyond excited. The unit was growing. There was a buzz around this new mobile and emerging platforms team. Journalism 499 (Journalism for Mobile and Emerging Platforms) was officially offered in fall 2015, but the class only ended up with four people enrolled.

Our director of journalism at USC Annenberg, Willow Bay, knew the importance of expanding learning opportunities for students. She supported the class and the growth of the unit within the Media Center.

Guest speaker and startup entrepreneur Eric Ortiz shows JEDI student manager Monica Castillo how to use the Evrybit app during the mobile and emerging platforms class at USC in fall 2015. Photo by Amara Aguilar.

The class, taught by Haggerty and me, produced weekly assignments on social media platforms. The students produced GIFs, Instagram photo series, videos and 360 photos, and they tried out new apps (like Evrybit and First Person). We had guest speakers from Fusion’s Snapchat team, spoke with Fortune’s audience engagement editor, and took a field trip to BuzzFeed. We learned that size matters not. The number of students in the class was small but mighty.

In addition, many Annenberg students contributed to the unit in the Media Center as part of their weekly required lab shifts. Others volunteered, excited by the chance to create something interesting.

Students in the class working with the JEDI unit planned special social media coverage and engagement projects. One project, diverSCity, focused on covering issues surrounding diversity at USC. The students created a Facebook page and took portraits of people in the campus community, asking them the same three questions. The variety of perspectives was eye-opening and powerful. The content was created specifically for Facebook.

The students also planned a community engagement event on campus tied to the diverSCity coverage, inviting students, staff and faculty to share their thoughts in person on problems and solutions surrounding the topic of diversity at USC. This type of engagement was exactly what we were looking for.

During the fall 2015 semester, something else happened. Two students (Barbara Estrada and Taylor Villanueva) who were part of the Media Center JEDI team created a fun video called “Similarities Between Arabic and Spanish.” Hurtado noticed the Facebook views on the video starting to spike. In a few days, the video had millions of views on Facebook.

This was new territory. Everyone looks for the “secret sauce” for viral videos. By producing content consistently and experimenting, our students got a taste of that secret sauce. And they were hooked. Their stories were reaching thousands, even millions. The Arabic/Spanish viral video now has more than 16 million views on Facebook. We had found our fluffy cat.

In the meantime, the unit got a new name. Mobile and emerging platforms unit (MAEPU) doesn’t exactly glide off the tongue, so I suggested something else, like JEDI. The name stuck. (We are still looking for a desk to call the SITH desk, but that’s another story).

The following semester, in spring 2016, the class had standing room only during the first week of school in January and has already started to produce engaging content. So, what did we learn?

Learning the ways of the JEDI

Hurtado reported that by January 2016, the JEDI unit produced 300+ minutes of content, reached 30+ million people and increased followers by more than 30,000 across platforms.

He also analyzed the audience of many of our popular social media platforms. For example, Annenberg Media’s Facebook page is 59 percent female, 40 percent male with 62 percent of the audience in the USA and 17 percent in Mexico. In addition, 65 percent of the audience is between 18 and 34 years old. Hurtado noticed some times were better to post than others. Noon posts worked really well on Facebook, he said. Then, there were the small things that made a big difference. Based on everything he had observed in the past year running the JEDI desk, Hurtado started putting together tips for new JEDI students (or Padawans as we like to call them), and he shared them during the start of the spring semester with the new class. He also agreed to allow me to repost here:

Haggerty and I also had several takeaways from professors’ points of view, including:

We have faced challenges. Professor Haggerty and I noted the following:

Despite these challenges, the JEDI unit is in full force. It’s a popular unit and it’s fun to see students telling stories on the platforms they are constantly using.

“This experience, no exaggeration, changed the course of my career and my interests too,” Hurtado told me in a recent interview. “Before this, I didn’t know careers existed in this and that media organizations were dying to crack the code behind mobile and social native content. I learned a lot.”

Hurtado, who was known as our JEDI master, graduated from USC in December. After receiving multiple job offers, he started working for Circa in March.

JEDI has a new executive editor and is continuing to grow and innovate while preparing students for careers in journalism, social media, audience engagement and emerging areas of the media industry. In short, we’ve got a good feeling about this.