Before Interviewing, Journalists Must Listen Deeply 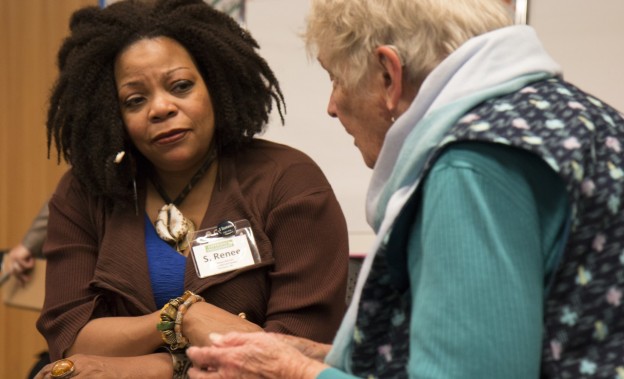 S. Renee Mitchell, an award-winning journalist, poet and artist, listens in during a breakout session at Experience Engagement. Photo by Emmalee McDonald.


"Why are we assuming we know what people care about when we can ask them?" - Burgess Brown

Earlier this year, Georgia Public Broadcasting sent a text message to members of Macon’s Listening Post network asking them to finish this sentence: “I wish Macon would….” Dozens of residents replied, including one woman asking for Sunday bus service. When GPB reporter Michael Caputo picked up the feed, he followed up with a story explaining why Macon’s Sunday bus service had ended — and what it would take to bring it back.

Supported by funding from the John S. and James L. Knight Foundation, The Listening Post in Macon aims to build community conversations around the issues that matter to people. It’s hardly a radical new idea for journalism, but the fresh twist is that these conversations begin in the community and then migrate to the newsroom, rather than the other way around.

“Why are we assuming we know what people care about,” says Burgess Brown, project lead for The Listening Post, “when we can ask them?”

It’s no secret that many of journalism’s experiments in “engagement” begin by asking how journalists can use social media, live events and other strategies to get more people to listen to them. But at the Experience Engagement “un-conference” in Portland, Oregon, Brown and others brought a very different question to the fore: How can journalists do a better job of listening to their communities?

Participants at Experience Engagement asked: “How can journalists do a better job of listening to their communities?” Photo by Emmalee McDonald.

On one level, this question calls for a re-examination of what journalists are listening for. In daily journalism, reporters and editors are wired to look for the latest-breaking story or front-page scoop. But as Jon Stewart so often lamented on “The Daily Show,” this obsession with shiny objects leads to coverage without context. Race riots in Baltimore, for example, get stripped of history and covered not as symptoms of inequality and discrimination on a generational scale, but rather as isolated incidents popping up like purple unicorns. Deep community listening requires journalists to listen for human stories with depth, texture, nuance and history — not just for sound bytes and quotes.

But in addition to the ‘for what’ question, deep listening also challenges journalists to think about whom they’re listening to. Traditional news routines privilege the voices of politicians, official spokespeople and perceived “policy experts,” while largely marginalizing community stories. This norm explains why people in positions of power often dictate civic discourse — and why news coverage tends to focus on presidential candidates’ xenophobic immigration proposals and fear-mongering war cries instead of on, say, how immigration policy impacts the children of undocumented immigrants.

To improve the breadth of voices and stories in the news, some newsrooms are shaking up traditional routines and experimenting with new approaches to community engagement. NPR, for example, created a Source of the Week initiative to increase the diversity of its news sources, and WBEZ launched Curious City, a project that crowdsources story ideas by inviting questions from curious listeners and allowing the community to vote on which questions reporters should investigate. (Jennifer Brandel, Curious City’s co-founder, has since launched another audience-driven news platform called Hearken.)

There’s also The Listening Post in Macon and its sister operation in New Orleans, which use the mobile messaging platform GroundSource to connect journalists with the pulse of the community. Andrew Haeg, founder of GroundSource, envisions community listening posts as a journalistic version of the neighborhood barbershop, where voices are equal and conversation is authentic. Sometimes that might mean talking about tomorrow’s weather or yesterday’s high school football game, but in other cases the conversations could sow the seeds of traditional journalism. Case in point: GPB’s story about Sunday bus service.

“That woman said something, and then a journalist did a story, and now maybe it’s going to come up at the next debate,” Haeg says. “I think that’s the future of journalism at the local level.”

Andrew Haeg, founder and CEO of GroundSource, participates in a breakout session at Experience Engagement. Photo by Emmalee McDonald.

On Day 1 of the Experience Engagement event, Haeg and Burgess teamed up with American Public Media’s Public Insight Network (PIN), Oregon Public Broadcasting (OPB) and The Piece, a Portland-based nonprofit leadership program for youth, to host a listening workshop. But instead of focusing only on journalists, workshop organizers recruited a diverse group of professionals who rely on listening as a core part of their work, such as youth leaders, psychiatrists, urban planners, artists and educators. The philosophical pivot for journalists: Instead of interviewing a few sources and reporting back to a mass audience, each group was paired with a single Portland-area youth partner and tasked with listening to community members on their behalf.

The groups didn’t get to meet their audience of one, but the responses from an OPB PIN questionnaire helped them develop a sense of what mattered to their youth partner. The issues at play were diverse. One youth, an incarcerated juvenile, wanted to know how he could influence people’s perception of juvenile offenders. Another asked for help getting her friends to put down their mobile devices long enough to have real conversations.

“The teams could have taken those issues and found good stories to tell,” said Linda Miller, director of network journalism and inclusion at American Public Media. “But this time their job wasn’t to find a story or chase a lead. Their job was to go out and listen” and report back on what they were hearing.

The teams came up with different strategies for putting their listening into action. Noticing some leftover hard-boiled eggs from the breakfast spread, one group canvassed the streets with an “egg for your thoughts” motto. Another carried a sign asking, “Are you being heard?” When locals stopped to talk, they asked questions and listened.

The participants also used GroundSource to solicit digital feedback from the community, and while some of the responses they received might sound like throwaway lines with no purpose for “the story,” Miller says listening isn’t about sniffing out the perfect answer. Rather, it’s about stepping back and relinquishing control of a conversation that journalists have become too comfortable dominating. “Sometimes that means listening to what other people want to tell you,” she said, “and not what you’re interested in learning from them.”

Although the workshop was an exercise in deep listening and not a model for journalism per se, it’s not difficult to imagine how the two could converge. Take the example of KPCC’s Make Al Care project, which began when reporter Meghan McCarty met a local chef named Al Gordon who said he didn’t plan to vote in L.A.’s municipal elections. For the next two weeks, McCarty led a #MakeAlCare campaign on the radio, soliciting advice from listeners, talking with a political scientist and even taking Al to a local forum where he could hear from the candidates himself.

By Election Day, KPCC’s campaign had successfully convinced Al to vote, which makes sense. McCarty listened to Al’s concerns and interests, and then she listened to members of the community with those concerns and interests in mind — an approach that connected not only with Al, but also with hundreds of other community members who shared his apathy for local elections.

This strategy should feel vaguely familiar to journalism, which regularly uses one person’s story to stand in for the collective experience of a larger community in news feature ledes. The difference here, Miller says, is that Al’s experience isn’t generalized. He’s not simply an anecdote or a “human voice” in an otherwise banal election story. Nor is his experience easily discounted or assailable. He is allowed to be authentic and relatable.

Miller notes that deep listening doesn’t ask journalists to abandon professional skepticism or sensemaking. It asks them only to be more human and empathetic, to try to see and explain the world the way others see it. “There’s a saying in journalism: ‘Don’t write for your sources,’” Miller explained. “But this approach is saying, ‘Write for your sources. Care about them.’ I think that’s where relevance resides.”

Throughout the Experience Engagement event, conversations kept returning to the idea that true engagement — the kind that makes audiences trust and value their local news organization — begins when journalists suspend their own snap judgments about news value and instead listen to what community members (instead of politicians) say is important.

That requires deep listening, which doesn’t just mean more interviewing. While the journalistic interview generally begins with a very specific purpose — to unearth quotes or sound bytes that add color to a journalist’s reporting — deep listening doesn’t begin with an agenda, and its purpose isn’t to fill a hole after the nut graf. Listening is a process, and while that process may often unmask important news stories — like when a woman asks for Sunday bus service and gets a response on the radio a few weeks later — journalists should embrace the act of listening as its own destination.

Correction: This post has been updated to correct that Michael Caputo was the Georgia Public Broadcasting reporter who followed up a Listening Post feed with a story on Macon’s Sunday bus service.