How to Set Up a ‘Fail Camp’ for Students 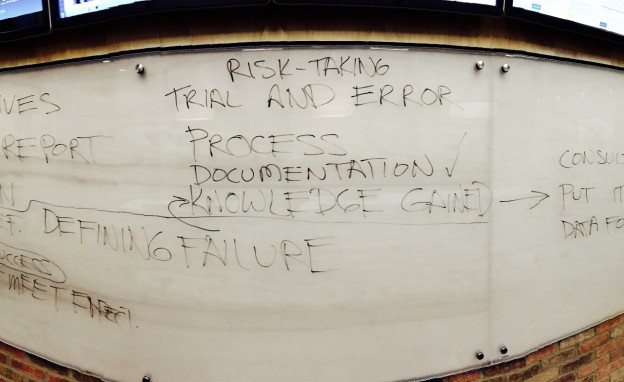 Students collaborate to define failure on their own terms in an experimental class. Photo by Joel Beeson.

It’s easy to evangelize a fast-fail philosophy in spirit, but it is much more difficult to put a reward system for failure into place. It is especially difficult in the classroom — after all, an F in college is not a badge of honor.

Add to this Millennials’ oft-cited propensity for perfection, desire to please and conform, and reluctance to challenge the status quo, and you don’t exactly have a recipe for high-risk innovation. Studies have painted a portrait of this generation as risk averse, and even emotionally fragile, in the face of uncertainty and stress.

James Hamblin, MD and senior editor at The Atlantic, pokes fun at the style of parenting that has created a cosseted generation in this Teaching Failure to Toddlers video, which attributes “helicopter parenting” and too much structure as obstacles to the kind of creative exploration that creates a life-long appetite for risk and a higher tolerance for change.

“Teaching Failure to Toddlers” is tongue in cheek, but some educators assert that a decline in student resilience is a serious problem for our campuses. It also raises concerns for employers for whom graduates may arrive in the workplace ill-equipped to adapt to the volatility of the industry.

John Keefe, senior editor for data news at WNYC and our current Knight-funded Innovator-in-residence, says that while failure may seem antithetical to the pursuit of fact-based journalism, “the best journalists know failure. If you knock on 20 doors — or 200 doors — before finding someone who’s willing to talk … that’s a lot of failure for a story.”

“The same is true with finding a new way to get at hidden data: Being creative might lead to failure,” he notes, “but it could lead to something awesome.”

One practically minded student asserts that it’s not as much about fear of failure as it is about time management, reflecting the business adage “what gets measured gets done.”

“If you’re not incentivized to innovate, its really hard to make the mental space to do that,” said West Virginia University student Colleen Good. “But when you have a more collaborative grading system, it gives you more space to play around with your own idea of what it means to do meaningful work.”

And there are larger cultural issues at stake when grading models reinforce a status quo. Traditional grading metrics don’t necessarily account for the diverse insights, backgrounds and learning styles that actually fuel innovation, notes Doug Mitchell, Project Founder of Next Generation Radio for NPR and co-founder of The Journalism Diversity Project. While Mitchell takes exception to the notion that millennials lack change agent skills – after all, he notes, they’re responsible for leading change by their user behavior – he also urges educators to challenge the traditional grading models that reinforce narrow social constructs, dampening innovation in the process.

“What I see from teaching and my projects is not a fear of failure, but an adherence to a construct created generations ago … an ancient class grading and standardized testing system that determines value, self-worth and presumed contribution to society.”

Or as broadcast junior Shaleah Ingram says, “Innovation starts with realizing that each of us comes from a different background, and we see and interpret information differently. If we can accept that and piece together our differences, we can be successful.”

In our effort to invite different ways of thinking, we sought a way to flip the “F=failure” grading standard last spring in an experimental class at the West Virginia University Reed College of Media. Our goals were to cultivate more tolerance in the classroom for uncertainty (a pre-emptive strike against student angst); to generate more risk-taking; to prod students to question the conventional reward systems; and to instill agency in them as inventors of new practice.

From Teacher: Students to Mentor: Creators

This particular class already didn’t fit in a box that made conventional sense. We were trying to define a new form of forensic journalism in partnership with our forensic science department and experiment with augmented reality. Oh and virtual reality too. We were having a hard enough time getting a handle on the project ourselves. Faking expertise was not an option.

We decided to just be up front about the dilemma and ask students directly, “What do you need to feel comfortable in an experimental environment?”

The first assignment of the semester was this grounding essay prompt:

“We are collaborating in this class on defining a new genre of journalism. We could wait until someone else defines the field … or we can experiment, immerse, define and narrate this genre ourselves. This changes the nature of our relationship from Teacher: Students to Mentor: Creators. And it changes the nature of the classroom itself. You will need to help set ground rules and expectations for the class. You need to tell me what you need in order to effectively innovate within this class.”

This assignment served a dual purpose — not only to generate excitement about the experimental topic of the class, but also to be clear about the inherent challenges, enabling students to drop the class if they wished (one student took the opportunity and dropped out).

Thus we started this experiment with a collaborative “Fail Camp” session that put students in the grading driver’s seat with surprising results.

As part of culture and knowledge building, students are introduced to a a variety of innovation scholarship. Photo by Dana Coester.

To set the scene, we first introduced students to our Top Five in innovation scholarship.

“It’s not just a buzzword. It’s science,” we assured them.

In order to fully grasp the challenges of change, we shared this quote from futurist Ray Kurzweil:

In his now cult-classic 2001 essay, Law of Accelerating Returns (which has been required reading for our experimental classes since 2006), Kurzweil helps a non-tech audience anticipate accelerating shifts in technology, or as Steven Kotler recently called it,  “The acceleration of acceleration: How the future is arriving far faster than expected.”

The gist is that an exponential change graph is relatively flat for a very long period of time but always reaches a point where the curve becomes vertical, and in terms of digital technology, we have reached that point.

We explain to students that in order to confront a future that is on top of us, we have to explore a different way to prepare for changes in our field. We have to forgo incremental skills acquisition and linear training. We have to leap.

If Kurzweil’s vertical curve represents the sheer cliff of technological disruption, we note that in disruption theory, you’re either climbing it or you’re falling off of it.

To illustrate why early adoption (or abject experimentation) isn’t reckless, we use Christensen’s concepts to help students understand who stands to benefit in a disrupted industry (i.e., they do).

While this classical curve has been revisited, adapted, shape shifted and challenged many times since rural sociologist Everett Rogers theorized it in 1962, it remains critical in understanding the nature of the early adopter-to-late adopter continuum. It also helps students visualize and understand how innovations have diffused through their own social systems.

First User benefits can be particularly persuasive to students, and the model has been at the core of our early adoption research for years in rural communities. We’ve extended this model to provide a compelling framework for students that addresses the question, “what’s in it for me?”  If you experiment in unknowns, we tell students, you will likely gain:

Taleb’s work Antifragile: Things that Gain from Disorder can be read as an elegant homage to the natural distress, ambiguity and chaos that characterize states of innovation. He flips the notion of fragility on its head and defines a new state of “antifragility” as an empowered realm imbuing not only high tolerance for, but also an ability to thrive in states of distress and disorder. We use this as a rallying call:

“Some things benefit from shocks; they thrive and grow when exposed to volatility, randomness, disorder, and stressors and love adventure, risk, and uncertainty. Yet, in spite of the ubiquity of the phenomenon, there is no word for the exact opposite of fragile. Let us call it antifragile. Antifragility is beyond resilience or robustness. The resilient resists shocks and stays the same; the antifragile gets better.”

Certainly there’s a balance between total chaos and the controlled classroom — as there are differences between what defines productive failing and what is just sloppy work. But we’re discovering our students know the difference and can achieve on their own terms. Here are a few of our take-aways from flipping the grade:

This is important to build trust and to demonstrate a sense of shared mission – “we’re all in this together” – when it comes to experimenting.

To reproduce your own Fail Camp with students, here are the prompts we used to guide our collaborative session and to help define the course’s expectations:

Telling data from our experiment is that most students answered the last prompt with a version of “Let loose and have fun.” Risking failure and rewarding the process should naturally involve an anthropological notion of play – a teaching strategy educators may find difficult to adopt. As Thomas Malaby, in “Anthropology and Play: The Contours of Playful Experience” observes, Western culture historically has maintained a long-standing distinction between work (productive) and play (non-productive), but digital technology, among other factors, has challenged that distinction. “It is difficult to deny that play is often productive, and that work, rather than always a matter of routine, can be shot through with the open-endedness we most often associate with play.”

It may be that our Fail Camp is really Play Camp, a classroom that promotes curiosity, a sense of joy, and an eagerness to improvise in the face of a perpetually changing and provisional media world.