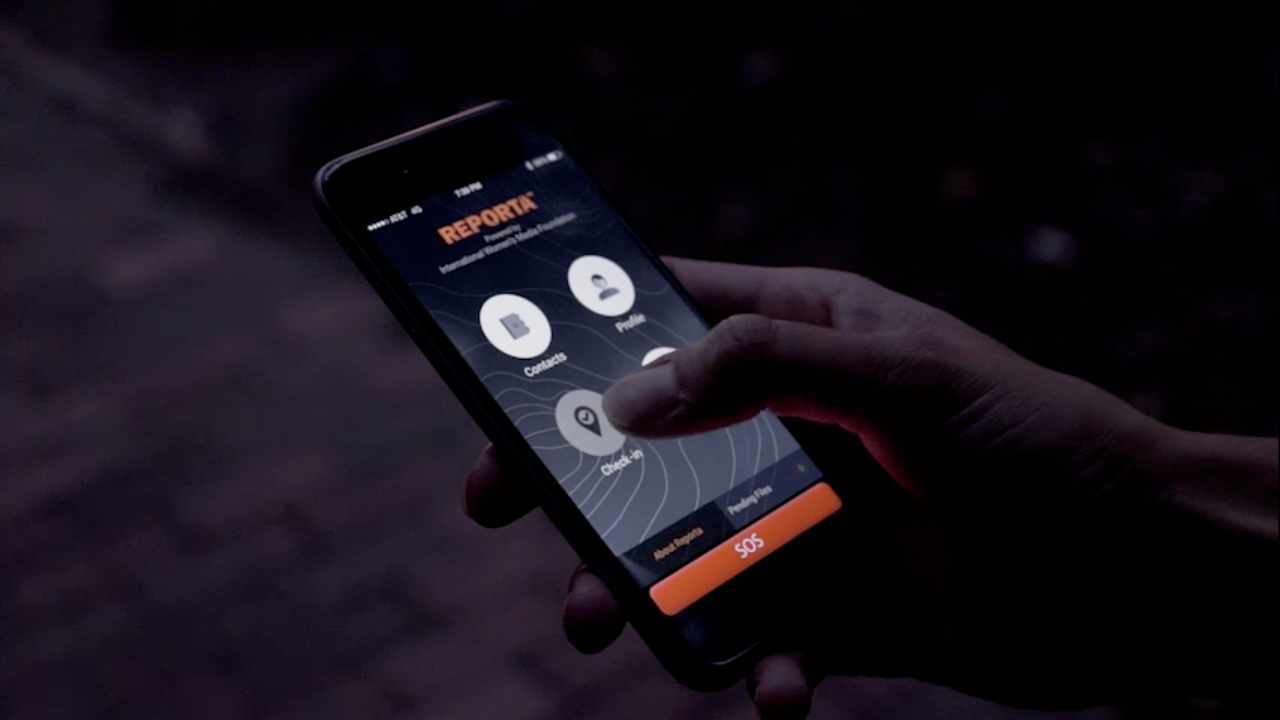 Executive Director Elisa Muñoz said the organization has long recognized the need for journalists to quickly and discreetly contact home base and the mobile app seemed the perfect conduit. “We know journalists always have a phone,” she said, “so why not use that to help keep them safe?”

Pre-planning is central to the app’s usefulness. Designed with a simple five-button user interface, sending out a check-in or alerting designated members of your team about distress is a swipe and a tap away. But the user must designate certain people (family, colleagues, friends) as primary points of contact who will be pinged regularly with check-in information via email and text. Key to this is establishing protocols with these people ahead of time for what to do if a check-in is missed or if an SOS distress call comes in.

Users set frequency parameters for reminders to check-in, and then are prompted to open the app and either tap to send a default check-in, or can add additional info, photos, and videos.

Additional location tracking prompts users to check-in every time movement is detected beyond 150 Km of the starting point.

The app is designed to transit information with minimal cellular service. David Golub from development group RevSquare said that, “with one bar, the app should work.” But if the user unknowingly enters into a cellular dead zone and misses a check-in, the server will send out an alert and the app will lock. Journalists using the app are warned to stay aware of their connectivity so that moving into a dead zone doesn’t trigger a false alarm.

When the app locks due to a missed check-in or an SOS, a unique code is sent to a predetermined contact who must somehow get this code back to the journalist to unlock the app. The locking feature is something the IWMF and development team grappled with, and ultimately decided that this feature was in the best interest of the user should their phone be compromised. Many tester journalists reported that they usually have their devices confiscated at checkpoints, and the locking feature provides deniability. Storing sensitive contact information inside the Reporta app then is more secure than other local data stores on the phone itself.

The auto-locking feature, non-local media storage, and a back end that strips identifying information are at the heart of this app, which takes precautions against compromising situations. A bare-bones user profile lives in the app (simply name, job title, affiliation, country of origin), as well as contacts, but no records of past alerts or check-in are saved.

Muñoz and her team underscored that this is a tool for augmenting and triggering safety protocols, and is reliant on the user and their team to plan for the worst. This video tutorial makes clear that, “it’s only as effective as the security protocols you have established.” The IWMF encourages journalists working in high-risk environments to seek additional training like emergency first aid.

Through beta testing, they also discovered the need for reporters to send distress signals for their fellow colleagues on the ground. The alert button features a menu of options to check off including detention, death threats, and kidnapping, with the option to include a photo or video of the scene.

Development began two years ago, involving approximately 300 journalists from around the world who tested and gave feedback. Muñoz approximates they’ve spent $500,000 in development and plan to build a pro version with back-end capabilities for media organizations.

The app is currently available in six languages: English, French, Spanish, and Turkish, and was built with right-to-left scrolling interfaces for the Arabic and Hebrew versions. The app is also available for Android and iPhone. Future versions will come with more language options, and they are considering adding a digital blackbox: an automatic 10 second recording triggered by the SOS button. You can get more information on the app here.

Fannie Cohen is a podcast producer living in New York. Her work has appeared on WNYC New York Public Radio, SiriusXM and MediaShift. You can follow her @yofannie.