How Wisconsin Students Took the Lead on Water Quality Project 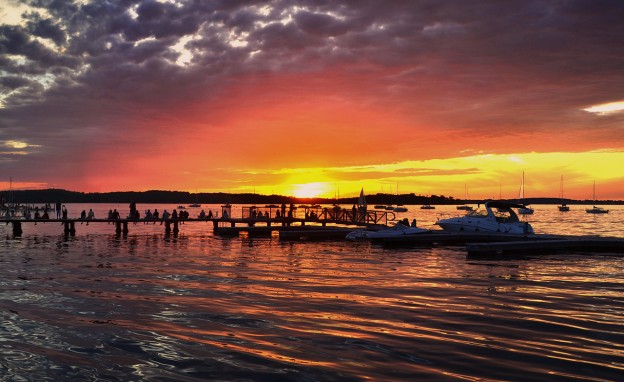 When I started the semester last fall, I put my faith in gnomes and underpants.

It was an analogy I’d heard over the summer from the University of Southern California’s Robert Hernandez at the Poynter Institute’s Teachapalooza seminar. Hernandez said he approached student projects like the gnomes in a South Park episode approached a business plan.

"I'll see leaves in the gutter and think immediately about phosphorus, or I'll see the green blooms in the lake and think about the algae...It's those smaller details that'll stick with me down the road." -Michael Frett, UW-Madison student
ADVERTISEMENT

For a student project, Hernandez said, set them off on an idea, then let it play out, with the idea that they’ll produce something in the end.

So I went all in and followed his lead. The University of Wisconsin-Madison’s School of Journalism and Mass Communication, where I teach, received a grant from the Online News Association to have a range of classes explore issues related to water in Wisconsin, a project we called The Confluence. I decided we’d spend the semester in my Intermediate Reporting class learning and writing about water, even if I didn’t know what that would mean or in what direction we’d go.

I started with the big picture. I lined up guest speakers to give us a base of knowledge about local water concerns. We were introduced to limnology and UW-Madison’s Steve Carpenter, one of the world’s most renowned experts on lakes. I asked the students to read The Big Thirst, a book about water issues around the world. I introduced the direction we’d be going on the first day of class and let my 10 students guide me from there.

I couldn’t really tell what my 10 students thought of our theme for the semester, but I learned later that they’d been open to learning about the range of problems and challenges facing Wisconsin’s waterways and water supply. We had some deep, thoughtful discussions about what’s in the water we drink and the quality of Wisconsin’s prodigious lakes and streams — something most of them really hadn’t ever spent any time thinking about before. “Outside of the California droughts, I never really heard anything about water shortages or problems with water quality,” one of my students, Michael Frett, recalled in an email.

About a month into the semester, once we’d established a uniform foundation, we spent part of a class period discussing what we’d learned so far and what we wanted to explore more. The students decided they wanted to focus on issues affecting Lake Mendota, which graces the north side of the UW-Madison campus. And then I let them become the teachers. We brainstormed a list of subtopics, and each student took one to research. Over the next few weeks, they each delivered a seven-minute lecture (another idea borrowed from Hernandez) about their topic. Bit by bit, seven minutes at a time, we built a foundation of knowledge together that we could tap once we hit the heavy-duty reporting phase.

If unraked leaves are carried through a storm drain, they will add phosphorus to the area’s lakes. Photo by Cassie Sterwald.

With a month to go in the semester, the students picked topics for their final projects, all of which took on some angle exploring why after years of effort to improve the health of Lake Mendota, its situation was stagnant. Each student was required to produce one long-form piece (written, audio or video), as well as an alternative story form — a slideshow, map or other visual form of telling the story of one of Wisconsin’s most iconic lakes. Each student also took on a role within the bigger project, with some serving as editors or webmasters. One team created a multimedia project about how agricultural runoff from nearby farms is the biggest detriment to the lake’s health. Their website, Treading Water, covered a gamut of issues, from the importance of raking leaves in the fall to how algae-covered water can be dangerous to animals and how Madison’s lakes are connected with the Gulf of Mexico.

For the students, tracking and diving into one issue for a whole semester was unlike any experience they’d had as journalists.

“I hadn’t had a class that followed one topic throughout the semester in such detail, and I think it really helped me realize how much work can go into one story,” student Elaine Menigo said in an email.

Here are the three biggest lessons I learned from that class last fall:
1. Get the students involved. I don’t think I would have ever gotten buy in from my students if I hadn’t worked to make them part of the process and the design of the course. I had an idea, and I let them guide the direction and development of the product. That gave them ownership in what we were doing and increased their engagement with the issue I’d introduced at the start.

2. Think big. On the first day we met, I showed my class some student projects that had earned national recognition from the Online News Association, and I told them there was no reason we shouldn’t compete for awards. By setting the bar high, they were primed to do top-level work. The site was recognized with an award from the Milwaukee Press Club and selected to be part of a Digital Salon hosted by UW-Madison’s College Library. The exercise of reporting one topic throughout the semester also mimics the work of a beat reporter — an opportunity journalism students often don’t get. “We know some journalists have to stay with the same topic for a long time,” student Pamanisha Gross said in an email. “It was valuable to stick with water for the whole semester because it taught us consistency.”

3. Make a difference. It’s a cliche to say that, I know, but I’m proud that my students took on a weighty topic and added to the public dialogue on an issue that’s important in our community. In his keynote address at Teachapalooza in 2014, Tom Rosenstiel of the American Press Institute talked about journalism being the literature of civic life. With this project, I gave my students an opportunity to contribute to that, and they enjoyed learning about and connecting with the greater community. Plus, what they learned has stuck with them. Every time there’s a beach closure or a story about the city’s water supply, they’re thinking and talking with their peers about water, my former students said.

“I’ll see leaves in the gutter and think immediately about phosphorus, or I’ll see the green blooms in the lake and think about the algae,” Frett said in an email. “It’s those smaller details that’ll stick with me down the road, the ones I probably wouldn’t have noticed if our project was a more rushed one and didn’t have the breadth of a full semester.”