Silence in Burundi as Violence Forces Independent Press Into Exile 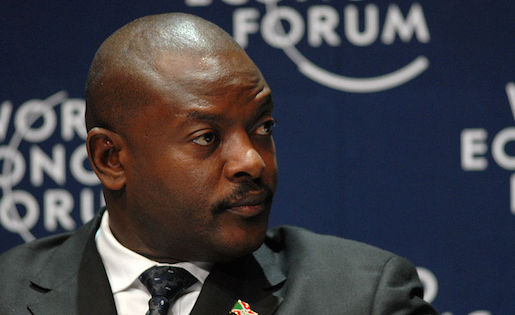 CPJ has documented a series of attacks on journalists since April 26, when Burundians took to the streets to protest President Pierre Nkurunziza's unconstitutional bid for a third term. Image courtesy of Wikimedia Commons.

On June 24, a grenade was thrown through the window of Voice of America correspondent Diane Nininahazwe’s home. It was one of three cases CPJ has documented in recent months where grenades were thrown into the homes of journalists in Burundi’s capital, Bujumbura. Fortunately, there have been no fatalities, but there have also been no arrests.

The attack at Nininahazwe’s house happened the day after she received threatening text messages. Nininahazwe had just returned from Gihanga, north of Bujumbura, where she had been reporting on abductions. She told CPJ she was too frightened to report the incident to police and has been in hiding ever since.

A journalist with the state broadcaster, who spoke on the condition of anonymity, added that "journalists who are working, especially journalists at state broadcaster Burundi National Radio and Television (RTNB), are not trusted by the public and consequently are targeted by police for one side, protesters and the public on the other side."

Months of attacks on journalists amid a disputed election

Since April 26, when Burundians took to the streets to protest President Pierre Nkurunziza’s unconstitutional bid for a third term, CPJ has documented a series of attacks on journalists. The crackdown intensified after an attempted military coup on May 13. Media outlets and radio stations were attacked and in some cases burned to the ground, and many of the journalists employed at them have been harassed and threatened, according to reports and journalists with whom CPJ spoke.

On August 20, despite a disputed election, Nkurunziza was quietly sworn in for a third term. No foreign head of state attended the inauguration. The recent closure of the country’s four leading privately owned radio stations, which have all been attacked or ordered by authorities to stop broadcasting, meant fewer journalists were there to witness the event too. The attacks on these stations and journalists has induced an exodus, leaving coverage sparse during a sensitive period.

Estimates from the Office of the U.N. High Commissioner for Refugees suggest about 180,000 civilians have fled Burundi since the protests began, with the majority traveling to neighboring Rwanda. CPJ and the Burundi Union of Journalists are aware of at least 100 journalists who have left the country since April. The journalists who left said they had been threatened, or feared persecution and a lack of employment after stations were shut down by authorities or set on fire during protests.

An exiled journalist who used to work for Renaissance Radio and Television told CPJ the station had come under pressure from the government during protests in April to report favorably or be closed down. The journalist, who asked not to be named, said that the pressure increased after the station covered the coup.

Before the threats of closure could be acted on, the privately owned station was burned down during clashes and unrest in the city on May 14.

Another journalist, who asked not to be named and who worked for Bonesha FM before the independent station was set alight during unrest around the same time as Renaissance Radio, said: “We were routinely intimidated during the unrest on the street by the ruling party youth militia, the Imbonerakure. They would check your laptop, your phone, even any social media accounts you have — as if they had any legal authority to do so.” The journalist, who hid in a truck carrying sacks of tea and whose two children managed to join him in exile, added: “Police just sit idly by and let these armed youth do as they please, the situation was so precarious, you never know what might happen.”

Calls by CPJ to the Bujumbura police and a government spokesman to ask for a response to the claims made by the journalists were not answered.

The Renaissance Radio and Television journalist, who managed to escape the country with his wife and children on what he described as a harrowing bus ride, said: “The worst part is trying to explain this senseless situation to our children, I am often lost for words.”

With no journalists on the ground, ‘an advantage for the [government]’

Life in exile is far from easy. Compared to Burundi, Rwanda can be expensive, and many journalists fled with few possessions or prospects for work. The majority have their families with them, a journalist still in Burundi and who asked to remain anonymous because of security fears, told CPJ. Relatives who stayed behind have been forced into hiding for fear of retributive violence. Former senior journalists in exile have found themselves sharing cramped rooms, surviving on one meal per day, said Bonesha FM Director Patrick Nduwimana. The support organization Rwanda Journalists Association has helped some of those in exile by providing a guesthouse and space for the journalists to work, the association’s executive secretary, Gonzaga Muganwa, said.

So many journalists have left that only the state broadcaster and a handful of faith-based radio stations that do not cover news are still in operation, according to local journalists. “The Burundi press used to be openly critical of the government,” Muganwa said. “Now there are no Burundians on the ground to capture the story fully — it’s an advantage for the [government].”

Nduwimana, who also acts as the head of an association of independent Burundi broadcasters, agreed. “There is now a blackout, for instance, on human rights violations that were previously made public by Burundi’s independent press,” Nduwimana told CPJ. “Every day people are kidnapped and killed,” he said, referring to claims of abductions and attacks reported by Amnesty International and international news outlets. Nduwimana highlighted how, without an independent press to report on such issues, future human rights violations could go undocumented.

Those still reporting in the country must be extremely careful, according to Innocent Muhozi, the director of Renaissance Radio and Television and independent media support organization, the Burundian Press Observatory. Muhozi, who decided to remain in Bujumbura, was quoted in a news report saying that he can no longer assign staff to cover certain places because of the dangers. A journalist with the state broadcaster, who spoke on the condition of anonymity, added that “journalists who are working, especially journalists at state broadcaster Burundi National Radio and Television (RTNB), are not trusted by the public and consequently are targeted by police for one side, protesters and the public on the other side.” The journalist said the scope of what can be safely covered is limited. Alleged killings cannot be investigated without fear that the journalist will be next, the reporter told CPJ.

Listening to Radio via Phone

Before the crackdown, people in Bujumbura routinely listened to the radio through their phones, tuning in daily around noon for the news, the Renaissance Radio and Television journalist, who asked not to be named, said. But without access to independent broadcasters, the public will be “stuck relying on rumors rather than impartial information,” Nduwimana, of Bonesha FM, said. He is involved in a project with some of the journalists living in exile, who launched an online radio station named Nzamba, which refers to a traditional trumpet. It broadcasts a daily news program focused on Burundi.

Although its impact may appear negligible — Burundi has the lowest Internet penetration in East Africa with only 1.38 percent individual usage in 2014, according to the International Telecommunication Union statistics — Burundians who do have access to the Internet share information with others through a variety of means. Audio files are disseminated to smart phones though apps such as WhatsApp, according to Nduwimana.

Although there were mixed views from the journalists with whom CPJ spoke on whether the situation in Burundi will improve any time soon, they agreed that access to independent news would help. One journalist, who did not wish to be identified, told CPJ: “This has been caused by the political crisis, so it will be improved if the government shows the will to reopen or give more space [to] private media. To be operational, journalists must be seen as contributors, not destroyers.”

[Reporting from New York and Nairobi, by Kerry Paterson and Tom Rhodes]

UPDATE: This post was updated to reflect both authors of the piece.

Kerry Paterson is the research associate for CPJ’s Africa program. She was an associate editor of the Journal for International Law and International Relations, and has worked with Médecins Sans Frontières, the Women’s Media Center’s Women Under Siege, and Massachusetts General Hospital’s Division of Global Health and Human Rights. Paterson has engaged in health and human-rights related work and research in Latin America, East and Central Africa, and the Balkans.

Tom Rhodes is CPJ’s East Africa representative, based in Nairobi. Rhodes is a founder of southern Sudan’s first independent newspaper. Follow him on Twitter: @africamedia_CPJ