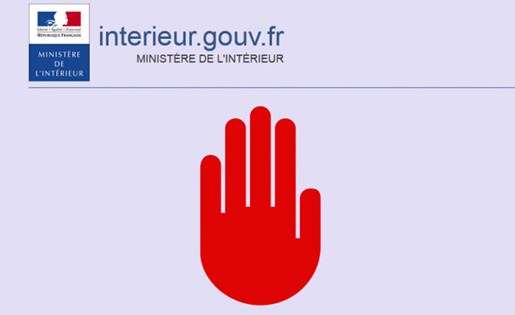 Various Islamist websites have been blocked in France, with this message shown instead.

Attempts by the French government last week to use vague legislation to block five websites for “condoning terrorism” would be troubling anywhere, but it is especially tragic coming from the country that gave us the champion of free speech and tolerance, and Voltaire.

The move appears to be part of a wider campaign by French authorities to impose on the rest of the world the country’s particular brand of censorship, which, as news coverage of several cases shows, often shifts unpredictably based on the circumstances of each case. This position is buoyed by similar trends the Committee to Protect Journalists has documented across the European Union–notably in the form of the so-called “right to be forgotten,” which the European Court of Justice judicially created in 2014 over the objections of E.U. Advocate General Niilo Jääskinen.

"By removing content from the Internet, especially without robust judicial review, the French government plays into the hands of the repressive forces it seeks to fight."

As reported in VICE, the websites ordered to be blocked contained allegedly extremist content. The sites were Islamic News, Jihad Zone, the website of a sympathizer with the al-Hayat Media Center, which publishes reports and video for the militant group Islamic State, Jihadmin, and a website called the Islamic State in Iraq and the Levant, which VICE described as “an amateur-looking blog with only three posts dating back to October 2014.”

According to news reports, four of the sites were still accessible in France on March 17. When the order is successful, anyone in France attempting to access a blocked site is redirected to the Interior Ministry site. A copy of the message explaining why the content is blocked was shared on social media sites.

The sites subject to the orders this week are not news websites in the traditional sense. And, while CPJ does not condone their message, the vague and broad language of the law–allowing the banning of content deemed by the Interior Ministry to condone or incite terrorism–leaves too much room for interpretation and could be used to censor a wider range of content, including news sites. By removing content from the Internet, especially without robust judicial review, the French government plays into the hands of the repressive forces it seeks to fight.

The misuse of terror laws to target journalists and sources

The greater danger lies in a state unilaterally choosing to scrub the existence of web content. According to CPJ research, countries, including Turkey, Eritrea, Cuba, Ethiopia, Vietnam, China and the U.K., have misused terror laws to target journalists and their sources for arrest. When democratic states play fast and loose with free speech obligations, it sends a message to repressive regimes that they can do the same.

The websites were ordered blocked pursuant to an anti-terrorism law that, according to reports, was criticized by human rights organizations and opposition party members for being heavy handed, and which came into effect in France in February. The law was passed in the wake of the Charlie Hebdo attacks in which 12 people, including eight journalists, were shot dead in Paris. According to a translation of the law reviewed by CPJ, service providers must block prohibited content no more than 24 hours after receiving notice from the Interior Ministry. The ministry is not required to seek a court order to demand that content be taken down. A similar law that took effect March 4 expands these powers to include search engines and email service providers.

The law bears a striking similarity to amendments to Turkey’s Law 5651 passed in the first quarter of 2014. Following an aggressive campaign by CPJ and others, Turkey improved these amendments to require judicial review of blocking orders. The French law lacks a similar provision, instead leaving primary unblocking authority to the Interior Ministry and providing only a weak appeals process that places the burden of challenging blocking orders on service providers. Even if the French law was amended to include advance judicial review, it would remain problematic to press freedom because it would constitute a prior restraint on speech.

It is not just journalists in France who may find themselves unable to access newsworthy content, or find their work undermined by this law. In February, French Interior Minister Bernard Cazeneuve traveled to Silicon Valley in the U.S. to lobby technology company representatives to suppress speech that France deems objectionable. According to news reports, the minister said after the meetings that France “doesn’t want to go through the usual government to government channels” when requesting the removal of content.

The technology companies he met with have not publicly stated if they would agree to his proposals. But according to The Wall Street Journal, Rachel Whetstone, global head of public policy at Google, said: “Given most people use the Internet for the reasons it was intended, we shouldn’t weaken security and privacy protections for the majority to deal with the minority who don’t.”

Also on Cazeneuve’s agenda was a proposal to give governments access to encrypted messages, news reports said. Such proposals have been criticized by technology and press freedom experts as dangerous and unworkable. It would sabotage encryption because a “backdoor” installed for one party may be exploited by others. Encryption either works, or it is broken; there is no middle ground. As CPJ pointed out in a joint letter last month to United Nations Special Rapporteur for free expression David Kaye, journalists — as well as banks, medical professionals, law enforcement officers and consumers — rely on encryption to protect privacy. In the case of journalists, this means protecting communication and research, which are essential to their work.

If Cazeneuve is successful in his efforts, it may mean that journalists outside of France will find themselves beholden to the government’s sensitivities. And, if France uses anti-terror legislation as a way to remove sensitive or potentially objectionable content, it could open the door to lobbying campaigns by even more repressive regimes.

Geoffrey King coordinates the Committee to Protect Journalists’ Internet and technology policy efforts. King, who is based in San Francisco, protects the rights of journalists through advocacy, public education, and engagement with policymakers worldwide. Prior to joining CPJ, King, an attorney by training, represented U.S.-based individuals in constitutional matters involving the freedoms of speech, press, and petition. King is also a documentary photographer whose work has focused on human rights and social movements. In addition to his work as an advocate and journalist, King teaches courses at UC Berkeley on digital privacy law and policy, as well as the intersection of media and social change. King holds a bachelor’s degree in Mass Communications, Phi Beta Kappa and with Highest Distinction, from UC Berkeley. He earned his law degree from Stanford Law School. His public GPG encryption key can be found here. Follow him on Twitter@CPJInternet.