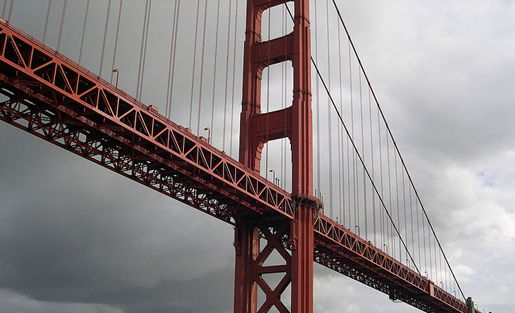 U.S. cities have been using municipal bonds to finance critical improvements, from transport infrastructure, to schools, to the Golden Gate Bridge. Photo by Flickr user Gareth Jones and used via Creative Commons license.

For the past couple of years I’ve been thinking about how to bring the energy, potential and ambition of donation/reward crowdfunding to community development and civic engagement. I was lucky to be an early employee of Spacehive, one of the first movers in the space; I put together the first study of the field (with the help of Ethan Zuckerman and others at MIT); and I got to watch as the idea of civic crowdfunding caught the attention of the media, researchers, and finally, heads of state. I got to watch some incredible people make change for their neighborhoods and their communities.

But there were two questions that often gave me pause. First, should we be funding civic projects through philanthropy, and does the success of that undermine public investment? Second, is it realistic to expect philanthropic crowds to raise the large sums that are often necessary to improve a community’s quality of life?

"Municipal bonds should be easy, sleep-at-night investments that allow you to contribute to your community directly. The problem is, they’re not."

The first question is a judgment call for which I’ve seen persuasive arguments on both sides. On the second question, I’ve seen very few cases that persuade me that the answer is yes. That’s not to say donation/reward civic crowdfunding doesn’t have a bright future in some respects. It has proven itself to be a robust way to produce small-scale change, especially in urban communities. As I’ve argued many times before, if non-profits start to take donation/reward crowdfunding seriously as a tactic, it has the potential to transform that sector and energize a whole new generation of small-dollar philanthropists. I will continue to work with and advise organizations who are considering donation-based civic crowdfunding for the right projects.

However, there are other methods of financing community development that can give a much stronger “yes” to that second question, the question of scale. One of those is a very old form of crowd-based finance: municipal bonds. For just over two centuries, U.S. cities have been using them to finance critical improvements, from transport infrastructure, to schools, to the Golden Gate Bridge. Municipal bonds give individuals the opportunity to invest in improvements to their city, while receiving predictable, tax-free returns every year, and, at the end of the bond (often 5-10 years), the individual gets his or her money back. They don’t offer the theoretically sky-high returns of stocks, but they do offer tax-efficient returns at very low risk (the default rate on municipal bonds is close to 1 in 1,000).

Municipal bonds should be easy, sleep-at-night investments that allow you to contribute to your community directly. The problem is, they’re not. At this moment in time, buying a municipal bond is complicated and expensive, in the U.S. and elsewhere. Those who have wealth and the right broker are buying them, and benefiting disproportionately because the market is effectively closed to the average person. People are starting to realize that they’re missing out, and when cities do open up their bond issuances, they sell out fast.

We’re heading towards an inflection point, and I’m certainly not the only one to have realized that. Neighbor.ly, which was one of the pioneers in the donation-based civic crowdfunding space, is building a platform to allow individuals and households to invest directly in their cities by buying bonds. So I’ve decided to join the team as Head of Product to help make that happen. I’m taking leave from my research because I think we’re at a critical moment in deciding the future path of community development, and I want to be in the front seat with the fantastic team that Jase Wilson has put together. It’s also a fun return to a subject I once spent a lot of time on: My first job out of college was reporting on government bonds and currency markets for Bloomberg News in London. So all that studying of yield curves and ratings scales is coming in very handy once again, a decade later.

From now on, I’ll be writing more about how municipal bonds work (and don’t work), and soon we’ll be giving you the chance to invest directly in your community through Neighborly. Come and join us on this new path.

Rodrigo Davies is based in San Francisco as Head of Product at Neighbor.ly, a community investment platform. He’s currently on leave from Stanford where he’s a PhD student in the Work, Technology and Organizations group, in the department of Management Science and Engineering. He’s also a Research Affiliate at MIT’s Center for Civic Media, where he was previously an MS student in the Comparative Media Studies program. In the past he has been a Summer Innovation Fellow at the San Francisco Mayor’s Office of Civic Innovation, advised the London-based crowdfunding platform Spacehive and been a consultant to the United Nations Development Program. He has also worked with Conde Nast India, the BBC and Bloomberg.