Video Production Is on the Rise – But Who’s Watching? 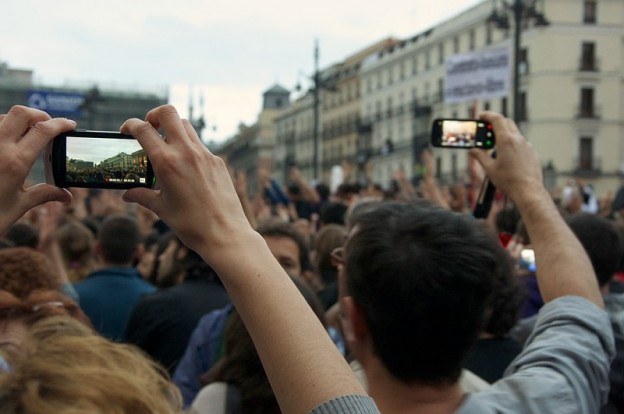 Citizen journalists capture an event with their mobile phones. Photo by Osvaldo Gago on Flickr and used here with Creative Commons.

This guest post is part of a series from the University of Florida College of Journalism and Communications’ “Captivate” project, which presents insights from media industry thought leaders on new strategies for audience engagement. Read more about MediaShift guest posts here.

There’s significant momentum for publishers toward increasing the production of video content, on account of both the strength of video as a medium for storytelling and high video CPMs as advertisers begin to move their TV spends online (see the Chicago Tribune’s coverage for one example). An increase in video content across the board, of course, means that it’s all the more important that we have a sense of which parts of our audience we can hope to reach with video. To that end, below is a brief survey of the state of online audiences and their consumption of video.

When visitors land on a text-based article, in almost all circumstances they read some portion of the article’s content. The questions we ask about optimizing article consumption, then, are about how deeply we can get visitors to read the content they land on and about their navigation – how we can improve the odds they’ll go on to read a second page.

With video consumption, though, the situation is entirely different: Excepting sites that automatically start videos when a visitor lands on the page (we’ll discuss them later), there’s massive attrition between the act of visiting a page with video on it and the act of actually pressing play. Of course, if someone doesn’t even play a video, the quality of the content is moot – we can’t possibly hope to win them over with a video that isn’t watched – so our first goal must be to identify and understand who the best candidates are for pressing play.

Journalism students edit video as the results came in during the 2012 presidential election in the Innovation News Center at the UF College of Journalism and Communications. Photo by Steve Johnson.

Does video content have a defined audience? We might suspect that video is simply a means to an end for content delivery – some stories have videos attached, some don’t, and viewers will consume content as it’s laid in front of them. Or, conversely, we might guess that video consumption is split at the consumer level, that some visitors will watch videos and others simply won’t. The answer, it turns out, is more the latter than the former.

Above is a graph showing the breakdown audience size by video consumption. The first thing that stands out is the steep drop-off on the left side of the graph. The majority of people who land on pages with video don’t press play: Only 35 percent of visitors who land on pages with video will press play anytime in a week. And, even among those who do press play, the volume of video each person plays is typically quite low: Nearly 90 percent of those who do play videos only watch one or two videos per week.

That implies that, for the most part, when we’re talking about video consumption we’re talking about flyby consumers who might happen to press play, but aren’t on our sites for the purpose of watching videos. For these visitors, context seems to be key – the video plays that do happen are on articles with high-quality, relevant videos.

There’s a twist, though: A tiny minority of visitors, almost exclusively on desktops, watch a massive portion of total videos consumed. In aggregate, the top 0.5 percent of desktop video watchers – those consuming 20 or more videos per week – account for 17 percent of all video consumption across all devices. That rate is fairly remarkable when compared with consumers of written content, where the top 0.5 percent of readers only account for a few percent of consumption. And, not only do these people consume a huge amount of content, they seem to consume the vast majority of the video content put in front of them: Desktop visitors who watch over 20 videos per week hit play on over 80 percent of the videos that they see. With that high a rate of consumption, the challenge for serving this segment of the audience is simply feeding their appetite for content.

What the device dictates

Students in USC’s Fall Digital News Immersion course edit video on their mobile devices in a Wallis Annenberg Hall classroom at USC after a field assignment during the fall 2014 semester. (PBS MediaShift photo)

Perhaps unexpectedly, all of the above only applies to consumers visiting sites on desktops. We don’t see such outsized consumption by a minority on phones or tablets.

Variations in video consumption by device are compounded by device usage patterns throughout the day. Broadly speaking, desktops are used during the workday, tablets have strong peaks during at-home hours in the morning and evening, and phone usage is roughly constant throughout the day (with a brief dip during late-night hours).

That’s raw traffic, but video starts add their own dimension. On desktops, visitors are, apparently, dramatically more likely to play videos they come across during working hours (not that you would watch videos while sitting at your desk, of course): 23 percent of desktop visits to video pages result in a video start on the weekend, while weekday desktop traffic has above a 33 percent start rate. If we break down weekday traffic further and ask about the hour of day, we see more evidence of the work/home split: The desktop video start rate is over 37 percent at noon, falling to below 30 percent after 6 p.m. on weekdays.

On mobile phones, on the other hand, the exact opposite is true: Play rate is just 17 percent on weekdays, but it climbs to 23 percent on weekends. During both weekdays and weekends, time of day has a much smaller effect than what we saw on desktop. Finally, tablets exhibit yet another interaction pattern, with very low start rates at any time of week, and essentially no difference between the weekday start rate (15 percent) and that of the weekend (16 percent).

Given all of the above, the best bang-for-buck should come from pushing a high volume videos to desktop sites during weekdays and, if possible, another set of videos to mobile visitors on weekends. With such weak numbers, tablet video experiences are likely the least useful to concentrate efforts on.

Get into the specifics

I’d be remiss if I didn’t note that the above is data aggregated from dozens of sites (that opt-in to allow us to anonymously aggregate data), and consumption on sites you work with might vary radically from what I’ve described here. The key takeaway, though, is that video consumption is not simply spread out evenly across our audience, with a random set of people watching videos. Rather, a very specific set of people, on a specific set of devices and at a specific set of times, form our core audience – our goal should be to identify those people and figure out how to foster and grow that segment of our audience.

Before I finish — what about autoplaying videos, which I brushed aside above? Autoplay represents a distinct challenge to analytics because it’s so difficult to gauge user interest in the videos that are playing. There’s some evidence that autoplay videos may hurt video viewability (see this article for one discussion of video viewability), and we’ve seen that videos that automatically play slightly increase the fraction of visitors who quickly abandon pages. On the other hand, of course autoplay radically increases video playrates. Whether the tradeoffs work in your favor is something that needs to be decided on a site-by-site basis.

A version of this article first appeared on the University of Florida’s College of Journalism & Communications’ blog on Medium.

Josh Schwartz is Chief Data Scientist at Chartbeat. He focuses on applications of machine learning and optimization to help media companies grow and monetize their audience. His work has been featured in The New York Times, The Washington Post and The Atlantic, among others. In a prior life, he researched machine learning, optimization and computer vision at MIT, Cornell and the University of Chicago. In another prior life, he was a moderately successful coffee entrepreneur and a slightly less successful bicycle racer. He occasionally tweets as @joshuadschwartz.