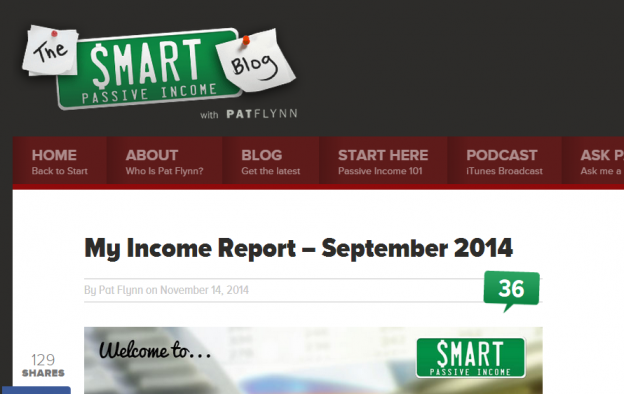 Pat Flynn's Smart Passive Income site was one of the first to post transparent income reports.

In mid-November, an entrepreneur named Pat Flynn, who runs a popular website called Smart Passive Income, published a monthly update that has been a regular feature on his blog for several years: a report on the previous month’s income (or in this case, income for September. He apologized for being behind schedule). In it, he provides a line-by-line breakdown of all his income sources, from the $30 he made running affiliate advertising for a product called Sucuri to a whopping $36,150 on affiliate advertising for Bluehost. (The way affiliate advertising works is that the website owner gets a cut of the revenue if someone clicks on a link to a product and buys it.) Add it all up, and he brought in $97,975.41 that month. Flynn then goes to work listing all his expenses, including $9.99 for his Dropbox subscription and $13,069.40 he paid out to developers for future products he’s building. At the end of the piece, when he subtracts his expenses from his revenue, we learn that he made a net total of $80,037.81 for the month of September.

Yes, those numbers are jaw-droppingly amazing for an independent blogger, but to focus on only them and ignore the rest of what Flynn wrote in that post is to miss what is likely the main reason he wrote it: so both he and his readers could glean lessons from his experience. The post isn’t simply a documentation of debits and credits, but rather it’s a narrative of his entrepreneurial journey, detailing the challenges he met and the results of the experiments he’s implemented.

“I thought it would be good to tell the world what my goals were, rather than keep it to myself.” -Tom Ewer

“It’s always good to look at the past and what was accomplished and what has been set in motion for the future,” he explained in the introduction of the income report.

Flynn, one of the earliest and most prominent pioneers in transparent income reports, has been joined in recent years by a growing list of bloggers who have sidestepped the taboos against talking about money and are opening up their banks accounts for all to see. And according to the bloggers who practice this income transparency, they’re making the professional world a better place because of it.

The stigma against talking about your salary is strong. If you’re reading this and work for someone who employs multiple people, whether it’s an office job or a Starbucks, chances are very few of your coworkers know what you make and you don’t know what they take home either. Often this plays to your employer’s benefit. In a recent piece for The Atlantic, Jonathan Timm recalled how he was threatened with termination at both a coffee barista job and, later, a law firm if he spoke with his colleagues about their pay. It likely wasn’t a coincidence that these threats came at the same time he was trying to renegotiate his own pay. Managers know that employees, without this crucial knowledge, can’t use their coworkers’ pay to their advantage when negotiating.

“Employers who keep pay secret are free to set pay scales on arbitrary bases or fail to give well-deserved raises because of social norms,” Timm wrote.

For Tom Ewer, a UK-based blogger, his income reports served as a mode of accountability that forced him to keep his eye on the prize as he went from negative income to raking in up to $8,000 a month.

“I thought it would be good to tell the world what my goals were, rather than keep it to myself,” he told me in an interview. “That was really the thinking behind the income reports, that they would hold me accountable and act as a very public form of success measurement.”

When Ewer launched his blog in July 2011, he was working for his father in commercial property management and development. It wasn’t that he necessarily had a particular passion for writing or blogging, he just wanted to pursue something with “more freedom and flexibility,” and he found the opportunity of earning passive income enticing. So he launched Leaving Work Behind, and within six months he felt he had enough momentum that if he quit his job and devoted himself full time to it then it would quickly reach sustainability, which it did by mid-2012.

His business plan, at least at first, was fairly simple: He would build a community by writing three posts a week and then use it to generate freelance blogging assignments. Near the year anniversary of his blog’s launch Ewer began to diversify his revenue by producing what he called “information products,” which were essentially online course made up of text and video that his readers could purchase.

Ewer started publishing the monthly income reports from day one because he wanted to map the trajectory of his growth and show the reality and hardship that goes into building a career from scratch. “All the [other income reports] I had seen seemed to start at $10,000,” he said. “Like boom. Out of nowhere. I loved the idea of being able to track my success starting from $0.”

That being said, publishing report after report showing net negative income can become disheartening at times, but Ewer argued it also kept him motivated. Writing them also forced him to perform a monthly analysis of his progress thus far, which enabled him to pinpoint his strengths and weaknesses and work on strengthening the former and avoiding the latter. And as he began to amass an audience, he found himself with a group of cheerleaders who would chime in with each report.

“It was always good to get feedback from people,” he said. “It didn’t always help or inspire, but I would get some great insights at times.”

Many bloggers have found that their income reports are consistently their most widely read blog posts, an indication that they’re filling a vacuum for a market of would-be entrepreneurs who are intensely curious about the nuts and bolts of building a business. (Perhaps this is why Alex Blumberg’s new podcast Startup, in which he minutely details his struggles to build a podcasting company, became popular so quickly.)

“People write a lot of nebulous, unproven stuff,” said Steve Scott, an affiliate marketer and e-book author who publishes his own income reports. “But when people see real numbers and real data, it’s an example of what actually worked and what didn’t. The problem is that they sometimes focus more on the financial numbers rather than the kind of the stuff that got me to that point.They seem to focus on the outcome, not the effort behind it.”

Scott, who lives in New Jersey, described transparency as a new business model; there’s a growing contingency of people who will pay for you to open up the hood to show them how the engine works, whether it’s through an e-book that costs $2.99 or a $50 video course.

“As a society we’re getting more educated and our BS meter is more finely tuned so that we can tell when someone is making stuff up. We know when someone actually knows what they’re talking about.”

And when we find that person, we’re willing to pay him or her to impart their knowledge on us.

When it doesn’t make sense

So should we all start publishing income reports tomorrow, giving play by play details of how we secured each penny? It turns out that this kind of transparency is more amenable to some kinds of business, particularly the kind where you’re selling a product at a fixed price. Alexis Grant, a longtime journalist who now runs a content marketing company, has dabbled in income reports, but there are some aspects of her business that must remain hidden. In October, she published an income report for The Write Life, a blog she runs about the business of writing. The Write Life generates money through affiliate marketing and advertising, but it makes up a tiny percentage of her overall income. Most her money comes from Socialexis, a content marketing company she runs.

“I’m happy to blog about revenues with The Write Life and e-books,” she told me. “But I wouldn’t do this for the client side of my business, specifically because I just feel like some of our clients pay us more than others.”

In other words, an income report would essentially remove her bargaining power, just as letting your employees discuss their pay with each other gives them more leverage in negotiating their salaries.

Of course another possible worry about producing income reports is that they have a tendency to shift your entire self-worth so that it rests upon a single metric: how much money you make. Tom Ewer, after publishing income reports for nearly three years, suddenly stopped them. In a blog post announcing the decision, he explained that as he made more and more money, he found the reports less useful. Their main function was to provide structure as he tried to get his business off the ground, but now that it was humming along, he found they were providing a different mode of motivation.

“Money has become a lot less important to me, and Leaving Work Behind was never about making loads of money,” he told me. “It was about freedom and flexibility. They were affecting how I viewed my business perhaps in a way I didn’t want to.”

Before you dismiss this as hippie idealism, consider how Americans, especially younger generations, are increasingly making lateral career moves because they value happiness over money. Nowhere has this been seen more prominently than with Wall Street’s struggles to recruit Ivy Leaguers who are flocking to Silicon Valley because they’re more interested in changing society than making more money. In a world where money truly isn’t everything, income reports can sometimes be viewed as merely shallow materialism masquerading as transparent business advice. The decision to produce your own may depend on whether they actually help clarify your business goals and, perhaps more important, whether you can publish the reports without suddenly finding yourself a slave to them.

Simon Owens is a technology and media journalist living in Washington, DC. Follow him onTwitter, Facebook, or Google+. Email him at [email protected]