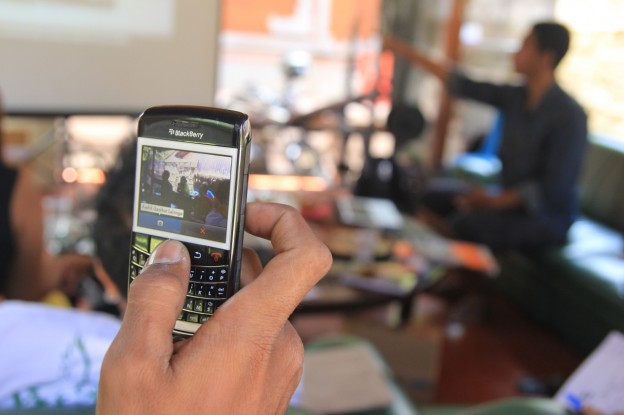 J-Lab has been on the front lines of what began as "citizen journalism." Photo by Anton Muhajir on Flickr and used here with Creative Commons license.

Little did I expect when I left the Philadelphia Inquirer to come to Washington, D.C., 20 years ago, that I would end up on the front lines of journalism innovation, participatory journalism and news startups ­– just as the journalism industry was on the precipice of profound disruption.

I quickly took on a leadership role in what was to become one of the nation’s most controversial attempts to reform journalism: the civic journalism movement. Castigated by the cardinals of the profession for its outreach to readers and viewers (there weren’t many “users” then), civic journalism was an effort to experiment with new ways to engage audiences and stimulate citizen involvement in elections, local issues and problem solving. Its critics found abhorrent any idea that citizens might have input into how journalists did their jobs.

I can look back now with some amusement. But I gotta say: Civic journalism really worked. (More on this in another blog post.) It makes most of today’s audience engagement initiatives look a mile wide and an inch deep.

I now see the degree to which civic journalism was a precursor to today’s participatory and interactive journalism and the rise of citizen journalists.  And I am heartened when I see so many entrepreneurial news startups openly embrace civic aspirations. Consider Jim Brady’s BillyPenn.com, for one.

When a decade of the Pew Charitable Trusts’ generous support for civic journalism ended, I spun our efforts into J-Lab: The Institute for Interactive Journalism. Informed by early clickable maps that served as surrogate public hearings (kudos to the Everett Herald’s Waterfront Renaissance project) and by the gaming instincts of the first state tax calculators and budget balancers (hat tips to New Hampshire and Minnesota Public Radio), I wanted to move in a more digital direction. It was 2002, and we soon found ourselves in the vanguard of an onslaught of activities. We rewarded innovations with the Knight-Batten Awards, seeded startups with the New Voices projects and Women Entrepreneur awards, built digital capacity and created new kinds of knowledge.

In the process of monitoring these projects, J-Lab learned a lot. And we shared it in 11 publications and five websites that have been used as resources in newsrooms and classrooms. J-Lab was the first to chronicle the emergence of citizen-led community news sites. It was the first to capture the extent of nonprofit funding for news projects with a 2009 database of grant-funded news projects accompanied by video case studies. We tapped Mark Briggs to write “Journalism 2.0,” and it was such a popular early guide to digital literacy, it was downloaded some 200,000 times.

As I pivot to embrace some new projects, I offer this roundup of some  lessons learned:

Our funding for news startups ranged from $10,000 to $25,000 per project, and our pilot-projects ventures received $5,000 to $50,000. The demand for micro startup awards is enormous and the success rate is notable, especially when applicants must lay out plans for sustainability.

We received 2,011 applications for 22 awards in our McCormick New Media Women Entrepreneur initiative, launched in 2008; 73 percent of those projects are still active. Across the board, the applicants were deeply accomplished, with many Pulitzer, Peabody and Fulbright winners in the mix. The vast majority of the proposals expressed a passion for purpose-driven news and information projects addressing such things as sustainability, social justice or equity. These themes have started to become more pronounced in recent years. Look at The Marshall Project as a case in point.

The vast majority of our women entrepreneurs were also refugees from traditional newsrooms. What a shame their ideas could not find the oxygen to be developed in-house.

Our New Voices grants for community news startups attracted 1,433 proposals for 55 projects that turned into 57 websites. However, 44 percent of the projects were launched by journalism schools and half of these could not figure out how to continue after the initial funding was spent. Kudos, though, to some notable exceptions: Chicago Talks, Great Lakes Echo, Philadelphia Neighborhoods, Madison Commons and Intersections South LA.

I am particularly proud that our award winners represented a broad cross-section of applicants who won on the merits of their ideas and not because they had past relationships or grant-writing abilities.

J-Lab’s shared its learning in dozens of high-touch training programs for both journalism practitioners and educators at national journalism gatherings and at our own interactive summits and workshops. For more than 10 years J-Lab programmed lunches for journalism educators at AEJMC. For eight years, we produced sold-out pre-convention workshops for the Online News Association. We convened the first summit of university-based news sites and two women media entrepreneur summits.  When you give people practical, accessible tools and information, they will use them.

For nine years, J-Lab and its advisory board rewarded first-mover innovations via the Knight-Batten Awards for Innovations in Journalism. We honored 56 winners and showcased 196 notable entries, good ideas even if they didn’t win. Again and again, our awards were an early scout for innovations that later turned into Knight News Challenge winners or Knight grantees. Many of the ideas also were replicated by other news organizations.

While we may not know exactly where we are going in the future, sometimes, it’s helpful to look back. I am struck by how, if you track past Knight-Batten winners, you really capture the arc of journalism’s reinvention over the last decade. The awards were among the first to validate and honor:

The Knight-Batten Awards were unique in their focus on innovations that “spurred non-traditional interactions,” demonstrably engaged audiences, “employed new definitions of news”  and “created news ways of imparting useful information.” Again and again, they proved to be remarkably prescient about innovations that had real staying power.

My thanks to our supporters, who had the courage and creativity to fund these activities, including The Pew Charitable Trusts and the Knight, McCormick, Ethics and Excellence, Ford, Wyncote, William Penn, Gannett and Ottaway Foundations and to American University, our home.