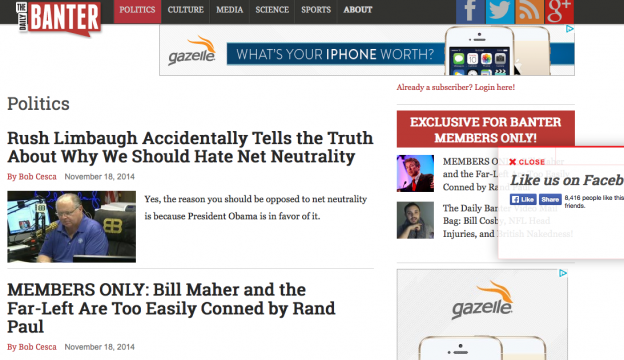 In 2008, Pazienza, then a producer for CNN’s “American Morning,” was called into the office of his boss and, as he recounted later, informed that his name had been “attached to some, uh, ‘opinionated’ blog posts.” Unbeknownst to his superiors until then, Pazienza had spent countless hours of his free time penning pieces for the Huffington Post and his own blog, Deus Ex Malcontent. Unlike the journalism he produced for CNN, which was ensconced in the beltway centrism that’s endemic in many mainstream news orgs, his writing for Deus Ex Malcontent eschewed “view from nowhere” objectivity and reflected the discontented anger that pervaded liberalism during the Bush years. Upon discovery of the blogging, CNN unceremoniously fired him, leaving Pazienza angry and, still in shock from the entire experience, perhaps feeling that he had nothing to lose by penning a tell-all essay of the debacle.

“Our business model is going to be to continue producing relentlessly good content.” -Ben Cohen

Though the episode made national news and raised his own online profile, Pazienza’s scorched earth handling of his firing ensured that no mainstream news organization would touch him, especially any cable or network news outlet. It also happened to occur just as the country was entering a deep recession, a confluence of events that resulted in an arid half decade where the blogger could find little more than freelance work — certainly nothing approaching the reliable income and benefits derived from working at CNN. Though he continued to blog and built up an impressive audience of a few thousand daily readers, he had nowhere near the readership needed to make a full-time living from ad sales. “I was making a little money off pledge drives, but that’s it,” he told me in a phone interview.

It was sometime during this period of career limbo that he was approached by another blogger named Ben Cohen. Cohen, a former boxing instructor who also dabbled in sports writing, had launched a blog called the Daily Banter in 2007.

“I just started it as a way to kind of vent my frustration with the way the media portrayed events, particularly with the Iraq War,” Cohen told me. “I wanted to do my little part in combating the bullshit that came out of the mainstream media.”

In 2009, Cohen looked around and realized that there were many blogs like his; they had small, yet loyal, readerships but had a difficult time monetizing. “I figured I could get these other sites involved and run ads across them. I’d take a commission and build a network.”

Pazienza was among a handful of bloggers who signed a contract with Cohen and erected a “Banter Media” banner on their sidebars. The bloggers were encouraged to link to each other when relevant and each received a monthly commission check based on the number of ad impressions shown. (Cohen had signed them up for a third-party network that served up display advertising.) “It was kind of Ben’s business model to bring a bunch of sites together and we’d be some flotilla somewhere in the the Pacific Ocean, desperately warding off the sharks,” joked Bob Cesca, a prominent blogger and early participant in the blog network.

But something became immediately clear to Cohen: The model couldn’t scale. As anyone who has spent any time working in online publishing knows, building an audience means constantly feeding the beast, churning out content to ensure that your readership has new items to consume every time it returns. Even Andrew Sullivan, the most well-known independent blogger, has at least half a dozen staff members writing unbylined posts for his site. Banter Media’s bloggers, many of whom had full-time jobs that made it difficult to update daily, couldn’t reach the threshold that would cause advertisers to take them seriously. “It was very unstable to use ad networks to monetize,” Cohen said. “And the ad rates were not exactly bringing in huge amounts of money.”

It was Cesca who first decided to abandon his single-author blog and begin writing posts for the Daily Banter, Cohen’s blog. Cesca had been writing for the web as far back as 1996, when he’d served as an editor of an early ezine. He started blogging at his own website in 2004 and, in 2005, was approached by Roy Sekoff, a founding editor of the Huffington Post, to blog for the then-fledgling commentary site. Though he was never paid for his HuffPo writing, his columns were often featured on its front page, and by the time Cesca began writing at the Daily Banter in 2012 he was easily the most high-profile writer in Cohen’s blog network. “I suggested to Ben that I contribute a daily article to the Daily Banter,” Cesca recalled. “One column length post a day, and Ben kind of thought about it for a bit, and said, ‘Yeah, why don’t we do that.’”

After seeking monetary investment from family members, Cohen was able to begin luring his Banter Media bloggers into writing for his own blog by promising them something that few liberal commentary websites can offer: a paycheck. Pazienza told me that he was hesitant to leave his own blog behind to come write full time for the Daily Banter, but in the end the ability to get paid for what he loved doing was too enticing. “After I got fired from CNN I devoted myself to writing online, and when this opportunity came along, it was like OK, I’ve been writing online and I’ve been working toward something. Here’s a guy offering money to be a part of this community and offering me creative freedom as well. So I said I’ll take it.”

As soon as Cohen began adding writers to the site, the traffic quickly began to scale. Today, he has at least six people writing more or less daily, and readership has been growing by about 25 percent a month. Though he still relies on the family investment to keep the lights on, he predicts that once the Daily Banter can reliably pull in 1.5 million uniques per month that it’ll finally reach a point of being self sustaining. It has actually already surpassed those numbers — he said it pulled in 2 million in July and hit 4 million for August — but that reflected a few runaway viral posts rather than the actual core readership.

The Lure of Clickbait

As the audience grew, the Daily Banter writers needed to grapple with what kind of editorial philosophy to which they wanted to adhere. Pazienza and Cesca had built their brands on acerbic, long-form writing, the kind that was sometimes anathema to viral traffic, so would they forgo their essay writing in exchange for clickbait? “The shitty thing you learn really quickly writing for the Internet is that I can write something that took me six hours to craft and put my heart and soul into it, and then hardly anybody will read it,” said Pazienza.

“And then I can put a picture of George Clooney with a quote on it that’s kind of badass and the thing will go through the roof.” Despite this temptation, every person I spoke to at the Daily Banter insisted that they avoided the quick-churn aggregation posts that you’ll often see at places like Gawker or Business Insider. “I think now we’re really focused on being the anti-Gawker or the anti-Buzzfeed,” said Cesca. “We want to create compelling content that isn’t relying on sensationalism or cheap gimmicks or clickbait. We want to prove there is something worthwhile to be done on the Internet, something that will produce a revenue stream without suckering people into clicking on our content.”

That’s not to say that the staff doesn’t jump onto trending news topics. Case in point: Shortly after Robin Williams’ death, Norm MacDonald began tweeting out a touching remembrance of the late actor. Pazienza was among the first on the Internet to round up all those tweets and publish them in consecutive order, and the post received over 400,000 Facebook shares and millions of views as a result; to date, it’s the most viral post ever published on the Daily Banter. But on that same day Pazienza also penned a long essay detailing his own fight with depression; it was a pushback against those who accused Williams of committing a selfish act by killing himself. “That didn’t go anywhere near as viral,” he said. “But when all is said and done, it’ll probably get like 50,000 to 75,000 hits. So in one day I put something up huge that I could have done in my sleep, and one thing I really cared about. That Norm MacDonald post will not bring readers back, but the depression piece was something I cared about and it’ll bring people back.”

Inherent throughout the Daily Banter is a kind of centrist left pragmatism. You’re just as likely to see a contentious post aimed at Glenn Greenwald — a prominent liberal critic of the Obama administration — or Salon.com as you are to see a takedown of the latest right-wing lunacy. Clicking into the comment sections of its articles, you’ll see that the site seems to have a core, returning readership. Part of the appeal of the Daily Banter is that it’s so personality driven — it reminds me of the early days of Talking Points Memo when that site was more reliant on the voice of founding blogger Josh Marshall.

It’s unclear as of yet whether this loyal, growing readership can pull in real revenue. In addition to display advertising, Cohen is exploring a number of other revenue models. “One is native advertising, or basically sponsored posts, which I don’t really have a problem with that as long as it’s completely transparent, doesn’t annoy your readers, and fits with your brand.” He’s also begun to experiment with subscriptions, seeing whether its more loyal readers will pay money for extra content. In August, Cohen published a post asking for donations in order to send Pazienza to cover the protests in Ferguson, Mo. He later told me he recouped his costs for the trip within 24 hours.

To reach profitability, Cohen said, the Daily Banter will have to continue building that core readership, the kind of audience that doesn’t merely fly in via social media but who sticks around and continues to return every day. His plan for this is enticingly simple: “Our business model is going to be to continue producing relentlessly good content.” Pazienza described the site’s appeal slightly differently: “We’re kind of a scrappy site that doesn’t take a lot of shit from anybody and has some pretty strong opinions.” Media empires have been built on less.

A version of this piece originally appeared here.