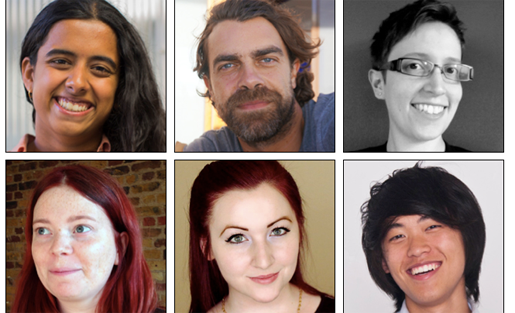 We’ve been looking for Knight-Mozilla Fellows for four years now, and so you begin to notice patterns during the process. There’s that moment when you worry that there won’t be enough applicants, and then that other when you worry there will be too many. There’s that melancholy time when you realize that you won’t have a fellowship cohort quite like the current one and then the exhilaration when you realize that’s exactly right.

But the most important moment is the one when all the pieces begin to come together and you begin to see not an applicant but instead a fellow. That moment is magic: the sheer volume of applications (417 this year—our largest pool ever) disappears and where there was once a mass of qualifications and ideas, you begin to see truly extraordinary individuals.

"Over the year a fellow will play the role of coder, teacher, mentor (and mentee), adventurer, colleague, and friend. They'll push themselves, and journalism, in new directions."

It’s a great pleasure today to introduce those individuals — our 2015 Knight-Mozilla Fellows — to you. These folks will spend 10 months in 2015 experimenting in some of the best newsrooms in the world (they’ll be joined by one more Fellow, at Vox Media, who will be announced later this year), on a mission to try new things, to document them in the open, and to connect with the broader community of people writing code in journalism.

The work that the Knight-Mozilla Fellows do during their fellowship year doesn’t fit easily into a single sentence. Over the year a fellow will play the role of coder, teacher, mentor (and mentee), adventurer, colleague, and friend. They’ll push themselves, and journalism, in new directions. They’ll do work that has real impact — on themselves and on the web.

It’s a tall order, but a thrilling one, and the people we have lined up to do the work of a Knight-Mozilla Fellow in 2015 are among our very best yet. I can’t wait for you to meet them:

Tara Adiseshan is a designer and data visualization engineer who is excited about civic media, learning tools, and community platforms. From designing search futures at Autodesk to conducting user research around rainwater harvesting in rural India, Tara has had the opportunity to apply design methodologies and build solutions in a variety of disciplinary spaces. Tara believes that access to and understanding of information and data can be a key leverage point through which social systems change. Tara will be a Fellow at the Coral Project, a collaboration between the New York Times, the Washington Post, and OpenNews.

Juan Elosua is a Spanish telecommunications engineer with broad experience in tech consultancy and financial services IT. In 2011, he discovered data journalism and became a data addict and freelance developer, and can now be found turning data upside down to extract knowledge from it. He strongly believes open data will play a key role in shaping the future of modern societies, and has trained journalists to help them find stories and work efficiently on data-related projects.

Livia Labate is a user experience designer and manager with a passion for in-house practice development. Livia is interested in how open source tools empower news creation and dissemination, and shape access to information and social participation. With over 15 years of industry experience, she has worked with large organizations such as Comcast and the BBC as well as heavily contributing to the development of the Information Architecture community of practice through the IA Institute. More recently, Livia has led Marriott’s Digital Standards and Practices group, focusing on stewardship and governance of digital experiences.

Linda Sandvik is a creative technologist and proto-MacGyver who likes to make things that inform, educate, and empower people and communities. She previously worked in local government and at Last.fm, and is a co-founder of Code Club, and her particular interests lie in using play and technology to help people discover their natural affinity for teaching themselves new things. She has a passion for open data, open knowledge, and serious games.

Julia Smith is a design professional from Omaha, Neb. She’s held a variety of roles in journalism and IT, having worked as a designer and developer on news sites, mobile applications, enterprise software, and corporate websites. She is fascinated with civic media and loves exploring the connections between storytelling, design, and technology to create experiences that empower community change.

Francis Tseng is a programmer and interaction designer interested in natural language processing, internet socializing, demystifying technology, and systems modeling. After two years at IDEO, he became a Knight Foundation prototype grant recipient in 2014. He is currently teaching the News Automata course at the New School’s Design + Journalism program and designing and building _critical_ software with friends at Public Science. Francis will be a Fellow at the Coral Project, a collaboration between the New York Times, the Washington Post, and OpenNews.