Mediatwits #129: The Rise of Hashtag Activism, from #IfTheyGunnedMeDown to #IceBucketChallenge 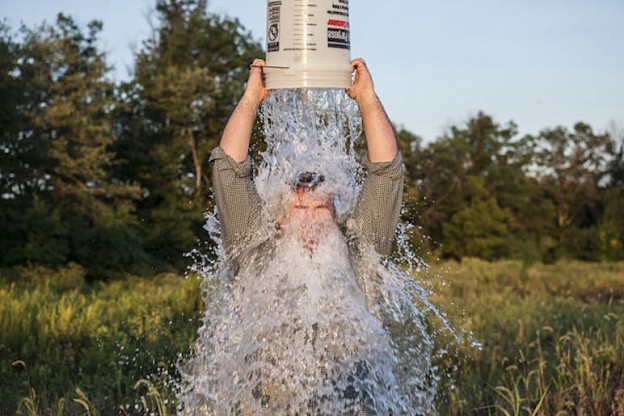 The #icebucketchallenge has swept the nation, raising $108 million for the ALS foundation to date. (Photo: Anthony Quintano/ Wikimedia Commons)

Hashtag activism, sometimes derisively called “slacktivism,” has become de rigueur as more people use social networks to spread memes, gather signatures and raise awareness of important issues. But the practice has also come under scrutiny because it might take the place of more real-world action; most often, hashtag activism doesn’t lead to protests in the street. But as James Poniewozik at Time writes, it is the most direct form of media criticism around, this era’s letter to the editor. #Bringbackourgirls brought international media exposure to the story of kidnapped Nigerian schoolgirls, something Poniewozik says wouldn’t have run on the front page without social pressure. Lately we’ve seen #iftheygunnedmedown (after the shooting in Ferguson) and #icebucketchallenge (to raise money for ALS) rise to national attention through social media proliferation. But is this effective means of protest or a superficial attempt to look like you care about something?

On this edition of the Mediatwits podcast, we’ll be discussing social media outcry and the rise of hashtag activism with Angelina Fanous from Vice and Jessica Craig from Pitt News, with Mediatwits regular Alex Leo from Newsweek, Andrew Lih of American University as guest host, with Fannie Cohen producing.

"The participants lose the satisfaction that real charity provides, and the ALS Ice Bucket Challenge is a one-time, unsustainable deal." -Jessica Craig
ADVERTISEMENT

Angelina Fanous moved from Egypt to the U.S. with her family when she was 10. She uses her experiences to report and write about the Middle East for VICE where she is a Senior Associate Editor. She now lives in Brooklyn.

Jessica Craig (right) is a junior undergraduate student at the University of Pittsburgh where she majors in Microbiology and Nonfiction English writing and writes a biweekly opinion column in the university newspaper, The Pitt News.

As protests flared in Ferguson, Mo., after a white police officer killed an unarmed black teen, Michael Brown, a different kind of protest broke out on social media. In the aftermath, many media outlets ran a picture of Brown flashing gang signs, supporting the assumption that the teen was a dangerous thug. But many saw the interpretation of the photo, and choice to run and re-run it, as racist. Some called it a smear campaign. That’s when the #iftheygunnedmedown protest was born, calling into question how police and media perceive black people. Hundreds tweeted contrasting pictures of themselves — often a graduation photo and another solemnly mugging to the camera — essentially asking, if they gunned me down, which picture would they choose to support the narrative that I was dangerous?

Meanwhile, the ice bucket challenge has swept the nation, encouraging folks to donate $100 to an ALS association or dump a bucket of ice water over their head, on video and on social. Some have criticized this as a ritual in narcissism as it seems most people would rather do the ice water than make a donation. But others say the belly-aching over the ice bucket videos is harmful to the cause, and that creating community is central to effective activism, hashtag or not. Vice’s Angelina Fanous, who was recently diagnosed with ALS, calls the videos, “an element of fundraising, like making team T-shirts for a charity or bringing cookies to a bake sale.” She purports that fundraising, social awareness, and activism requires a social bond to be effective.

The fundraising success is undeniable. The ALS Foundation says they’ve received $107 million and counting from this campaign. But the challenge was two pronged — to raise money and bring awareness of the disease. Jessica Craig from Pitt News asks, “where are the headlines about that?” She wonders if slacktivism is superficial, fleeting, and driven by fads — something you do once and then move on with your life rather than donating the most important thing, your time to people who need it. Weary of the current hype around the ALS challenge, she writes that “the participants lose the satisfaction that real charity provides, and the ALS Ice Bucket Challenge is a one-time, unsustainable deal.”