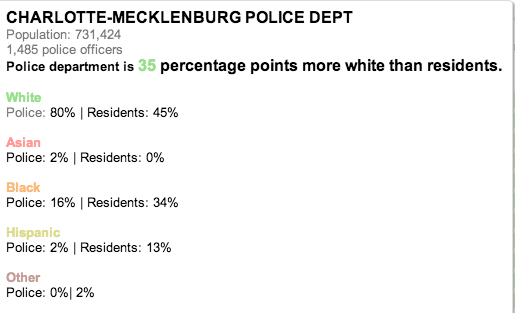 The author used Tableau Public to show disparity in racial makeup of police departments in various towns in North Carolina -- and how that related to the population's racial mix.

This post originally appeared on The Future of News.

One of the most important attributes of data driven journalism is that it scales, and the primary goal of my OpenRural, Open N.C. and data dashboard projects has been to democratize data so that we start seeing the same types of reporting and presentation in small community papers that we see in the big national news sites. So when I saw Thursday’s New York Times graphic on the race gap in America’s police departments, I immediately thought that something similar could be done pretty quickly that would look at North Carolina towns.

"Even if we acquire, clean and produce data along with some simple story guides, data driven journalism may still not find its way into smaller newspapers if nobody is there to receive our help."

Rebecca Tippett at UNC’s Carolina Demography service was able to pull and clean the data within about three hours. She posted the data in CSV format to her blog, along with a nice explanation.

Being a words guy rather than a picture guy, I used data visualization software Tableau to put together a prototype of something similar to what The Times had done. It is absolutely nowhere near as good as what they did, but I copied their concept, color scheme and fonts. And about two hours later I had something that told the same story.

Click on the image to see the interactive version of an embeddable graphic that can easily — and at no cost — be dropped in to any news site or blog (except this one … because I’m still hosting it on Javascript-averse WordPress.com).

Click to view the interactive version on Tableau Public.

The graphic alone doesn’t tell the whole story. Tippett pointed out when I showed her the chart that most of the Latinos in Siler City aren’t even eligible to join the city’s police force — 40% are not adults, and 80% of adult Hispanics there are not citizens.

The other potential problem with the data is that it’s seven years old. But so is the data used by The Times.

This is just an example of how we might continue to democratize data. This graphic could be emailed to an editor of each news outlet in North Carolina, along with a list of suggested questions that local reporters could ask to quickly make the data more relevant.

But even if we acquire, clean and produce data along with some simple story guides, data driven journalism may still not find its way into smaller newspapers if nobody is there to receive our help. At many papers, this would still be seen as enterprise reporting. As an editor with a staff you can count on one hand, do you send a reporter out prospecting for answers to these somewhat uncomfortable questions? Or do you have them write up the day’s arrests? Or preview this weekend’s chamber of commerce golf tournament?

North Carolina also has broad news deserts — whole counties that have no reporters shining light in dark places, holding powerful people accountable and explaining an increasingly complex and interconnected world. Siler City, for example, is in a county of 65,000 people with a single newspaper that reaches only 12 percent of them. The News & Observer — provides scant coverage of the county.

What other story templates would you like to see? What would make them easier to use?