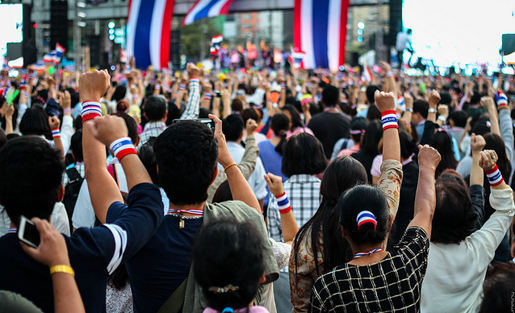 Protestors in Bangkok on January 16, 2014. Photo by Flickr user Victor Dumesny and used here via the Creative Commons license.

Sweeping online surveillance and internet censorship are fast becoming vital means for Thailand’s junta to consolidate political control since seizing power in a coup on May 22. Thailand’s military, since renamed the National Council for
Peace and Order (NCPO) has blocked hundreds of websites, issued orders that constrain critical reporting, and threatened those who produce or disseminate anti-coup content with military detention.

"As more are arrested, and online access to information is diminished, so strengthens the climate of fear."

Junta officials have since admitted that greater surveillance efforts are now under way. Officials traveled to Mongolia with view to co-opting regional neighbors and social media companies in their efforts to hasten blocking of online content.

In recent weeks, hundreds of websites including leading independent news site Prachatai have been forced to shut down. Human Rights Watch, which had issued a damning report into the violent events of May 2010, could be accessed via several local ISPs but found that its Asia/Thailand subpages have since been blocked.

A decision to temporarily block Facebook on May 28 was met with widespread outrage. The NCPO immediately denied claims of censorship, instead citing a “glitch” which Internet activists describe instead as proof of a social media “kill switch.”

The NCPO scrapped plans to meet with the makers of popular instant messaging program Line, “after taking a closer look at … typical content,” reported the Bangkok Post. A meeting scheduled with social media companies was thwarted when Facebook and Google, among others, simply didn’t show up.

Yet many have taken up online anti-censorship tools or alternative social networks in a bid to circumvent the army’s curbs to online content. As Facebook shut down, word quickly spread of links to effective VPNs, along with Thai language instructions for easy use of anonymizing program Tor. Some news sites have adopted measures, including anti-DDoS software, in an effort to prevent their sites from being taken down.

Offline, and a troubling climate of fear has emerged, with over 300 rights activists already summoned to appear before the junta. Some have been subsequently detained, in reconstituted military barracks, for a period of up to seven days. Others have remained abroad or gone into exile. Of those who have been released, some have been warned to stay away from social media as they continue to be monitored by “special units.”

The junta have since banned gatherings of more than five people, yet social media continues to provide means of information dissemination and co-ordination. A widely reported demonstration held at a central department store in Bangkok was first initiated online and led to one of the largest “flash mob” protests yet seen in the conflict. There protesters held up a three-figure salute — “liberté, égalité, fraternité” — a recent allegory for anti-coup dissent. In a declarative statement, and an urgent, if silent, means of protest, others have begun “reading in resistance“: staging small-scale sit-ins with copies of books, including George Orwell’s “1984” and “Noli Me Tangere” by Filipino revolutionary writer Jose Rizal.

In the days following the coup, the junta were quick to close down local and international stations, replacing content with army-issued announcements and folksy patriotic music. Soldiers were dispatched to local television stations in a bid to ensure swift compliance.

The junta issued six orders expressively forbidding media from either criticizing the army or sharing content deemed “harmful to national harmony and public order.” Orders issued by the junta enjoy the full force of parliamentary acts and can see journalists arbitrarily detained and summoned by a military court.

Pravit Rojanaphruk, a leading Thai journalist and longstanding critic of Thai politics, was among the first to report to the junta.

He was then held in detention for several days prior to being released without charge.

ISPs too, were among those summoned to report almost immediately following the coup. Little of these discussions has yet been made public. However, reports confirmed state-owned telecom firm CAT’s intention to cut all links to interviews with political leaders, pundits or academics.

Elsewhere, the Ministry of Public Health were widely mocked online for issuing of a statement warning the public “against the overconsumption of news which may lead to mental stress.” Headaches, difficulty sleeping and irritation could be overcome if Thais were to “follow only the news from state-run outlets in the morning and evening.”

Where to from here?

In Thailand’s fledgling democracy, conditions which allow for free expression and a free press are deteriorating fast. Having now seized power, the junta knows that much of their success will come to depend on their capacity to persuade the nation of their “good” intentions. Yet, as more are arrested, and online access to information is diminished, so strengthens the climate of fear. The junta are more likely than ever to face continued protest. And with fear, too, comes uncertainty: No one knows how long this might last.

“I can feel total censorship in the air,” wrote an anonymous media commentator. And yet, he or she added, “Silence does not mean consent.”