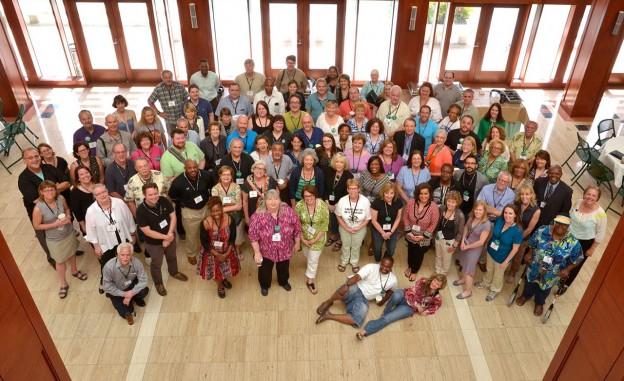 Participants in Poynter's Teachapalooza educators seminar walk away with new skills and fresh inspiration to take back to their classrooms. (Photo courtesy of Al Tompkins)

For three days last weekend, about 100 educators from around the world gathered at the Poynter Institute for the annual Teachapalooza conference. Now in its fourth year, the gathering is a chance for educators to gather to talk about teaching techniques and new tools and share ideas and philosophies.

“Teach students enough craft so they can learn to teach themselves as they move on.” - Tom Rosenstiel

Right off the bat, Al Tompkins, the physical and spiritual center of Poynter, lets educators know that they are there to “honor” each other’s work and that if they hear something they like, shout: “Teach It!”

I’ve now been to two Teachapaloozas, and the spirit of camaraderie and the number of takeaways are unlike those any other conference. It’s a fun, intensive weekend, and educators have repeatedly said they walk away and use something learned in their next semester.

While it’s impossible to capture everything, here’s a Top 10 list of Teachapalooza highlights and lessons learned:

1. “The world is your tripod.” Bethany Swain, a former CNN photojournalist who now teaches video at the University of Maryland, earned a special status this weekend when she became the first instructor to be asked to conduct a repeat performance at Teachapalooza. Swain’s double presentation on teaching video was easily one of the highlights this year, as she showed examples of good and bad video and how to use it in class. But her “cheap tools” suggestions, including the brilliant tip of how to use a water bottle as a tripod, were one of the best takeaways of the weekend.

Educators get hands-on time with new cameras and gear by Canon. Photo courtesy of Bethany Swain.

2. “Grades aren’t important.” Well, they are and they aren’t. The always-interesting discussion of how to grade in project classes came up during a presentation by USC’s inspirational force-of-nature, Robert Hernandez. Hernandez teaches advanced multimedia reporting, and he gave four innovation suggestions for the classroom, including teaching the “unknown” – diving into a class topic without knowing necessarily the direction the class is going to take. It was during that discussion that he spoke of working on one class project, where students bought into the idea that “grades don’t matter,” and instead were focused on producing solid journalism. It’s the difference between treating students as kids needing to be lectured vs. adults you can collaborate with, Hernandez said. The concept, which was met with some skepticism by educators in the audience, may be a bit before its time but as an innovative educational philosophy, it’s worth considering.

3. Teacha Tool #1: Vyclone. One of the unique features of Teachapalooza is the “Show and Share” sessions held during the lunch hour each day. Educators are given 10 minutes to show some of their work and innovation in the classroom to share with their fellow educators. During the last Show and Share session of the weekend, Michigan State’s Bob Gould demonstrated Vyclone, a cool app that allows multiple people to shoot video and upload to the Vyclone site, which automatically puts the multiple angles together in a video sequence. The “cool” factor led Poynter video guru Al Tompkins to say, “That blew me away.”

4. Teacha Quote #1. While there was a good amount of teaching examples and tools to walk away with, Tom Rosenstiel, co-author of “Elements of Journalism,” made an early appearance at the conference to talk about news literacy and the importance of teaching journalistic principles. In a weekend of inspiring moments, his motivational quotes may end up posted in my office:

5. It’s all about WordPress, baby!  Wisconsin’s (and EdShift’s) Katy Culver, Georgia’s Mark Johnson and Hernandez all spoke about the wonders of WordPress during the weekend. But one of the biggest takeaways for educators was learning that WordPress can act as the learning management system for your classroom. We won’t mention names here but when polled, few educators were happy with the systems used by their respective departments. Johnson cut to the chase on the benefits of WordPress as an LMS, saying WordPress is “so public, so obvious.” The one downside is grading. Johnson doesn’t post grades on assignments posted on his WordPress site (nor do I) and keeps track of grades separately. It’s a little more work but worth it considering the benefits of WordPress.

Georgia’s Mark Johnson preaches the gospel of WordPress during a session on managing classes. Photo courtesy of Al Tompkins

6. WordPress, Part 2:  Free or Cheap? Hernandez recommended journalism educators “own their part of the web” if they are teaching multimedia. Hernandez said educators can buy their own domain name and server and get up and rolling on the Web at a relatively low cost. Culver also provided three ways that WordPress can be use in the classroom: Getting students to develop portfolios of their work; individual projects; and group projects.

7. Teacha Quote #2: “Punctuation is not about feelings. Understand where they belong … you’re allowed one exclamation point in your life.” Roxanne Dill, from Louisiana State University hit a nerve with educators when she shared “Roxanne’s 10 Rules of Writing” during her Show and Share session. Put a group of journalism educators together and you’re bound to get war stories on writing challenges, but grammar seemed to be a recurring theme throughout the conference. The idea of “minimally marking” – making students fix their grammar and style errors on quizzes before they receive their grades – was another idea that met with positive responses from educators.

8. Teacha Tool #2: Screencast-o-matic. Another “cool” tool delivered via “Show and Share” allows those teaching video to provide feedback within the video piece itself. The tool allows the instructor to comment and analyze, allowing for close-ups on problem areas, with suggestions for fixes and alternative approaches.

9. Snowfall & Lightning Talks in your classroom. Hernandez did a tutorial session on J Query, demonstrating to educators how the code can help jazz up student projects. Over and over during the weekend, Hernandez stressed that educators need to get beyond the fear of breaking the Web and not knowing the outcome of experimenting with different ways of telling stories.  “I’ve been through so many fires, I know it will work out.” Hernandez also suggested giving up the classroom time to students to allow them to give “Lightning Talks” on various projects: “Let them teach themselves.”

10. Data. Data. Data. The data and visualization presentation by Katy Culver and Sara Quinn was worth the price of admission to Teachapalooza. Educators couldn’t take notes fast enough as the two spoke about tools — from Open Refine (clean up messy data) to Topsy. com (search archived tweets) to Timeline.js (interactive timelines). The duo (known as the “Poynter Sisters”) covered a lot of ground in a short amount of time and even provided a resource page for those educators who wanted to do more with their classes.

You can’t visit the Poynter Institute and not be inspired. The place and the people provide oxygen for the journalistic soul. Leading the inspirational charge is Poynter’s big bear, Al Tompkins. If you’re an educator and you haven’t been in a room to listen to Tompkins speak, you’re missing out.

One of the great benefits of Teachapalooza is its timing. Most programs have been out of session for a little over a month by the time Teachapalooza hits in late June, and it’s the perfect time for journalism educators to attend and recharge. Tompkins challenges you, but he also reminds us educators of why we do what we do. We teach journalism because we believe in it and in its future in a democracy. And after three days of learning and chatting, Tompkins left educators with this thought: “These skills are made for giving away.” Teach it!