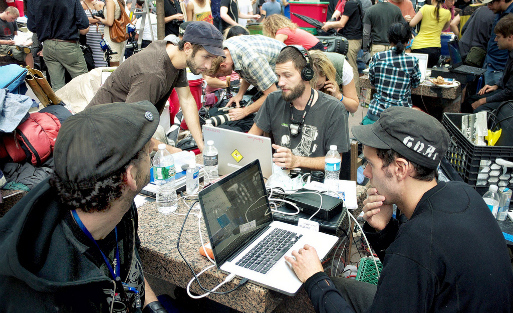 Saturday, May 3 was World Press Freedom Day. The following is a guest post from FreePress to mark the day.

“If you want to liberate a society,” Egyptian Arab Spring activist Wael Ghonim said early in the year, “just give them the Internet.”

"To break the pattern of expression and repression we must look deeper at the tools protesters and reporters use and ask whether they further the cause of press freedom — or just make speakers more vulnerable."

In retrospect, Ghonim should have qualified his statement to include the kind of Internet free societies need. For as online organizing has spread across the Middle East and North Africa, governments have heightened efforts to remake digital networks as tools of censorship and surveillance.

Today, the optimism about free speech and the Internet that emerged during Egypt’s 2011 uprising has been dashed by subsequent Morsi and Sisi regimes, which have silenced online and traditional media and imprisoned dozens of journalists.

In January, Egypt’s Interior Ministry drafted legislation that would censor websites that “instigate terrorism,” according to a report in Al Sherooq. Sites the Ministry singled out for monitoring include Facebook, which has become a channel for many Egyptians to report local news, mobilize and voice their dissent.

It doesn’t end there. This cycle of Internet optimism and then despair repeats itself wherever people take to the streets and the Web to organize and report on large-scale protests.

By many accounts, Turkey’s Gezi Park protests of 2013 were the country’s high-water mark for online organizing and reporting. But the protests were followed by a clamp down on the Internet.

Earlier this year, the government of Recep Tayyip Erdogan imposed a ban on Twitter and YouTube. But a constitutional court decision to rescind the Twitter ban in April hasn’t stopped the repression. The regime has shuttered local websites without court orders and collected Web-browsing data on individuals. Earlier this week, courts sentenced newspaper columnist Önder Aytaç to 10 months in prison for a single tweet insulting the prime minister.

In Ukraine, this past winter’s Euromaidan protests hastened the departure of the corrupt government of President Viktor Yanukovych. Some of the best reporting came from a community of live streamers — people using smartphone cameras, streaming apps and network connections to provide viewers worldwide with a live video record of protests roiling the streets of Kiev.

And yet the aftermath in Ukraine has featured a crackdown against journalists so severe that OSCE Media Freedom representative Dunja Mijatovic has had to intervene almost daily to protect journalists from censorship, surveillance, harassment, kidnapping and imprisonment.

The Arab Spring and other democracy movements have evolved into a digital game of cat and mouse: Online activists and new media journalists devise ingenious new ways to get around firewalls, connect with others, report on street protests and share videos while repressive regimes deploy new technologies to turn the Web into a surveillance and censorship machine that puts everyone at risk.

Indeed, when asked whether the Internet has been a force for good or evil, media scholar Zeynep Tufekci likes to answer “Yes.” In other words, it’s both the best of times and the worst of times for the free speech rights the network is supposed to enable.

To break the pattern of expression and repression we must look deeper at the tools protesters and reporters use and ask whether they further the cause of press freedom — or just make speakers more vulnerable.

The tools of new media expression fall under four categories:

The most immediate are the devices — primarily smartphones. Both protesters and reporters have pressed their phones into service to document and stream live events during occupations at Gezi Park, Tahrir Square, Zuccotti Park and beyond. In most every setting, reports of authorities targeting smartphone users to stop recording are common.

Smartphones are vulnerable to snooping. According to the Electronic Frontier Foundation, smartphone users sacrifice their anonymity, locations, privacy and even control of their devices to authorities using sophisticated intercept technologies.

We must support policies that defend everyone’s right to record while adopting better technologies and applications to protect devices from shutdown and surveillance.

“Hosting your political movement on YouTube is a little like trying to hold a rally in a shopping mall,” writes Ethan Zuckerman of MIT’s Center for Civic Media. “It looks like a public space, but it’s not — it’s a private space, and your use of it is governed by an agreement that works harder to protect YouTube’s fiscal viability than to protect your rights of free speech.”

The same can be said for Facebook, Twitter and most every other application protesters and journalists use. Zuckerman compares social media executives to “benevolent despots” who use their corporate terms of service — not First Amendment principles — to govern their decision-making about content.

To be more accountable and transparent to users, these platforms must allow a full public view of every decision to block content. And these sites should invite feedback from users as a check against abuses.

In extreme cases, including the Bay Area Rapid Transit’s decision in San Francisco to block cellphone services during a 2011 protest, authorities have shut down networks. A more insidious approach involves filtering network content to identify — and even locate — speakers and block their communications.

Intelligence agencies worldwide have acquired network-intercept technology from a multibillion-dollar surveillance industry that has few reservations about selling its wares even to the most repressive regimes.

U.S. network providers have handed intelligence agencies the metadata on millions of customers while lobbying Washington to lift Net Neutrality protections that prevent them from blocking or degrading communications.

To protect networks we need laws that right the imbalance between privacy and national security. And we must restore Net Neutrality to give users full control of their online experience.

Technology has turned reporting into a two-way conversation between journalists and their audiences. And yet that works only when everyone can participate via open and secure networks.

According to the International Telecommunications Union, only 40 percent of the world’s population uses the Internet. And higher rates of usage are concentrated in developed countries (in contrast, only 16 percent of people in Africa have access).

If we’re to realize Wael Ghonim’s society-liberating promise, we can’t just protect the network from censorship and surveillance. We also need to ensure that everyone has the opportunity to connect.

Media technology has changed, but our free speech rights haven’t. Freedom of expression is more important — not less — when anyone with a mobile phone and an Internet connection can speak out.