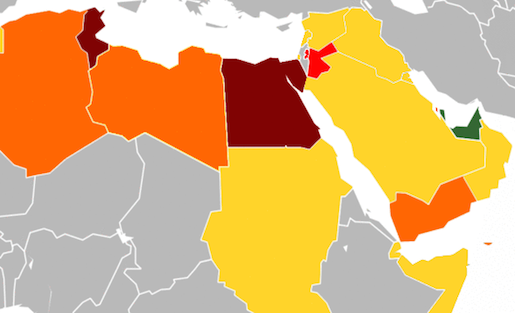 “Entertainment Media Use In the Middle East” is a six-nation survey detailing the media habits of those in Qatar, Egypt, Lebanon, Tunisia, United Arab Emirates (UAE) and Saudi Arabia.

A new study by Northwestern University in Qatar and the Doha Film Institute reveals that Middle Eastern citizens are quite active online, with many spending time on the web daily to watch news and entertainment video, access social media and stream music, film and TV. “Entertainment Media Use In the Middle East” is a six-nation survey detailing the media habits of those in Qatar, Egypt, Lebanon, Tunisia, United Arab Emirates (UAE) and Saudi Arabia.

The results of the survey, which involved 6,000 in-person interviews, are, in part, a reflection of how the Internet has transformed Arab nations since the Arab Spring. More than ever, consumers in the Middle East/North Africa (MERA) region are using technology to pass along vital information, incite social and political change, become citizen journalists and be entertained. Here’s what the study found about how Arabs consume and interact with media.

"More than ever, consumers in the Middle East/North Africa (MERA) region are using technology to pass along vital information, incite social and political change, become citizen journalists and be entertained."

The highest number of Internet users are in the UAE (96 percent of the country is on the web), and the lowest is in Egypt, where only 36 percent log onto the Net. There’s a strong draw toward such as YouTube and anything that entertains, as nearly 60 percent visit the web daily just for entertainment purposes. To put the importance of video in perspective, Saudi Arabia watches more YouTube content per capita than any country in the world according to Financial Times reporter Simeon Kerr. Just as in Western countries, younger people are more likely to engage with all types of digital content. Sixty-eight percent of citizens under 25 use the Internet every day for entertainment, as opposed to 52 percent for those 45 and up.

Social media is another way for Arab consumers to express themselves and be entertained. Ninety percent of people using the Internet have a Facebook page except in Qatar, where only 36 percent of Qatari nationals are using the social network. For reasons that aren’t explained in the report, a higher percentage of Qataris use Instagram (46 percent). But overall, Facebook is the most used social platform in the Arab world. Twitter comes second overall, with half of interviewed Internet users on the site. It seems Twitter is most popular in Saudi Arabia and the UAE, however, and especially with U.S. and European expats as opposed to those originally from the Arab world. In keeping with American Twitter demographics, younger and more educated Arabs use the site most frequently. Google+ has some weight in Lebanon, with half of Lebanese Internet users accessing the platform, but Instagram hasn’t exactly caught on. Only 20 percent of all the survey participants use Instagram, with almost no users in Egypt and Tunisia.

Despite the mass use of media for consuming popular culture in Arab nations, still 65 percent of the 6,000 interviewed said “government oversight helps produce quality entertainment.” Particularly, residents of Saudi Arabia and Qatar are most in favor of the government regulating violent and sexual content, either by deleting scenes or banning entire shows/films. But only 37 percent of Tunisians support state involvement in entertainment production.

Tunisia leads the pack in video viewing, with 55% of Netizens watching daily

Thirty percent of Internet consumers in the Middle East seek news online, but it’s not the most popular genre of digital content. Comedy is the most preferred online destination at 40 percent, with music videos at 30 percent, sports coverage at 24 percent and drama at 20 percent. Two exceptions are citizens in Egypt and Tunisia, who say they favor consuming news online over comedy. There is also a gender gap when it comes to reading and viewing online news in the Middle East. Men were found to be more likely to consume news and sporting events online, but women sought articles, videos and multimedia relating to home improvement and food. The study indicates that younger people consume news online less often than older residents, who tend to consume religious content more than comedy, music videos or sports.

The uprisings in the Arab world since late 2010 and the uptick in citizen journalism may partially explain Middle Easterners’ growing propensity to comment on digital video. On average, 55 percent of those interviewed share their opinions on the Internet, with Tunisians being the most active and only 39 percent of Lebanese residents reporting that they comment online. (In Lebanon, you face jail time and fines if you talk poorly about public officials.) The Middle East media report reads, “Men, those under 35, and those with less education are more likely to share their opinions online.” At the same time, men comment on news videos more than women do, and younger Internet users are more likely to share their thoughts in response to user-generated video.

Undoubtedly, news consumption is important in Arab societies, and the study’s authors wrote that news and entertainment media may be separated by a very thin line.

“Across the globe there is a convergence and blending of information and entertainment, even spawning the genre of infotainment,” the study’s conclusion reads.

Not surprisingly, television remains a significant medium in the MENA area, with 70 percent of those surveyed reporting they watch the tube daily. Most tend to be loyal to watching content produced in their respective countries, except for Qatar and the UAE, where residents watch U.S. and Arab peninsula programming more than Qatar- or UAE-produced TV.

As the study notes, “people are beginning to take more control of their television viewing,” deciding when they want to watch. Binge TV viewing is on the rise, but especially among young people and women, and streaming is more popular than downloading TV shows to a device. Tunisians and Egyptians are the most fond of watching digital TV, with Lebanese residents being the least likely to stream or download TV programs. Twenty-five percent said they “interact” online with TV shows in one form or another.

To read the entire Entertainment Media Use in the Middle East study, which includes a closer look at Arab society patterns in consuming music, film and video games, click here.