How Watchup 3.0 Is Looking to Get Personal and Android-Friendly 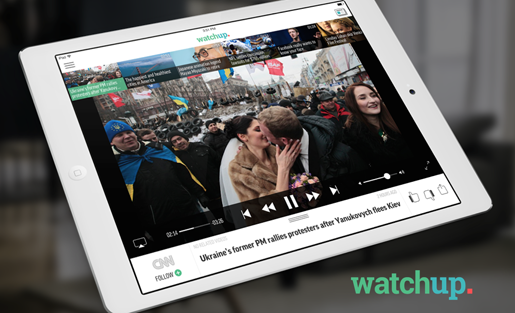 Despite what you might have heard, being a tech entrepreneur is not easy. You spend months crafting a product, from design thinking to development, coordinating and encouraging your team. Working hard. Testing. Fighting against bugs — or at least cheering your team on. It’s not easy! And then that moment comes when what you’ve built is out in the world and you are proud of your team and you want to make it available.

That day has come for us, and Watchup 3.0 is finally a reality. We’ve learned from our users, so you’ll see some changes in this latest version.

"Watchup is the first app to deliver a multi-channel news experience on wearables with Watchup for Glass."

Users loved their multi channel daily newscast. At the same time, we also discovered that, when you trust a media brand, you sometime want to sit down and watch — binge-watch, they say — an entire stream of videos from that source. That’s why we have redesigned our left menu so that you can tap any channel and watch its entire stream. Thanks to our natural language processing techniques, we’ve also created thematic streams with all the most relevant business news, tech news etc.

Watchup 2.0 used to cap to 20 the number of channels you could subscribe to because we initially thought this would help people not being overwhelmed by too much content. By talking to our users, we have learned that moving away from that limitation could unlock a lot of potential in terms of content availability. That’s why Watchup users can now subscribe to as many channels as they want.

Striking the right balance between serendipity and personalization is one of the hardest things to do in the content discovery business. With Watchup 3.0 we are increasing the level of personalization: Users can now offer feedback, a thumbs-up or a thumbs-down, to every video so that our algorithm can better fine tune their newscast.

As navigation is now organized per stream, we had to find a way to preserve users’ history. The new Watched stream keeps all the latest videos they have watched in one place.

Watchup 3.0 offers high-quality reporting from over 200 channels including The Wall Street Journal, the Associated Press, The Washington Post and others.

Experimenting on the iPad only for over a year has been incredibly useful because we didn’t have to deal with multiple front-end systems and, therefore, we had the freedom to iterate fast. Now, Watchup is going to expand to new platforms, starting with Android tablets this week. You can download Watchup on Google Play, too.

Watchup 3.0 launches on iPad and Google Play at the NAB Show this week where the company has been selected as one of the top startups that are disrupting the video industry.