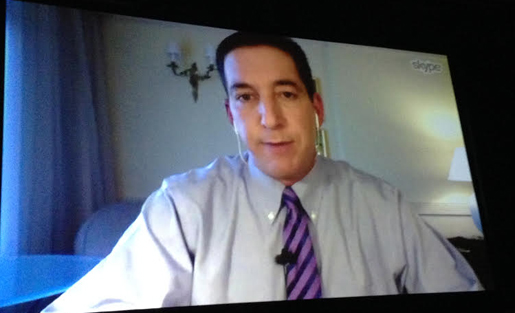 "Many of the most shocking and significant stories haven't been reported," said Greenwald on the NSA surveillance program docs he has, in a Skype interview at SXSW.

Amid the frenzy of SXSW Interactive were a few fundamental themes: 1) mobile is here to stay; 2) social media is the lifeblood of anyone with content to share and 3) data privacy will become a commodity given today’s surveillance state. “South By” was crawling with opportunities for journalists and publishers to learn about upcoming trends and challenges, and acknowledge past industry triumphs.

Here are some takeaways from the media and journalism scene at SXSW:

"If [journalism is], in any way, effective, it brings with it risks." -Glenn Greenwald

SXSW on the social future of journalism

“The beautiful thing about social is that if you’ve got great stuff, [readers will] share it on their own. It’s not that we don’t have any strategy, it’s just that we’re focused on the content.” – Atlantic President Scott Havens, “Can Great Journalism Make For Great Business?”

Havens took us through the bumpy ride the Atlantic has endured, since the magazine found itself scrambling for answers after all-time low revenues in 2010. In the mag’s rebound, Havens and his team have re-purposed their energy toward digital out of necessity, which he said must include a heavy concentration on generating content that will get shared.

Because folks are looking to the reading recommendations of their friends on Facebook and Twitter more than they’re using search, direct website URLs or third-party links, Havens said forward-thinking journalists should understand that the “social web is content discovery.” This core belief, as he called it, has pushed his editorial team to turn efforts toward writing smart headlines and effective day-parting approach – which both lend themselves to mass social sharing.

“You need to be willing to be really late on something or never get it at all in the name of accuracy.” – AP Social Media Editor Eric Carvin, “Accurate, Fair & Safe: The Ethics of Social News”

As part of a new working committee supported by the Online News Association, Carvin and Digital First Media Project Thunderdome Managing Editor Mandy Jenkins affirmed the ever-growing need for journalists to do crowdsourced reporting, especially when they can’t be on the ground during a natural disaster or conflict. The ONA-sponsored Social Newsgathering Ethics group is in the process of developing hard-and-fast rules for what is and isn’t acceptable in social newsgathering, but verification and accuracy top the list of challenges journalists are facing in the newsroom.

With the proliferation of bogus photos floating around and catapulted to the top of your Facebook and Twitter feeds when disaster strikes (e.g. the shark swimming in Puerto Rico streets and the menacing “Day After Tomorrow” photoshopped images of Hurricane Sandy), Jenkins said she uses tools and apps such as Geofeedia, Falcon and TinEye to quickly vet a piece of reporting surfaced on social media. You can read more about the ONA’s efforts in defining an ethics code for social newsgathering here.

UPWORTHY AND THE RISE OF THE VIRAL

“Facebook is looking at clicks and whether people are sharing something.” – Upworthy CEO Eli Pariser, “Do Algorithms Dream of Viral Content?”

When it comes to the business of news curating, Upworthy is the name on most lips. Upworthy relies on the tried-and-true social sharing habits of audience members for their success. According to Pariser, “liking” a story is meaningful but “stops things from propagating.” Sharing Upworthy content, however, is a “significant validation of that thing. That looks, from an algorithmic point of view, pretty good…We don’t know if we’ve succeeded unless people have shared it.” Pariser’s comments on the validity that social sharing gives to content (and the curator) are underpinned by Upworthy’s 50 million-plus visitors per month, though that number is down considerably from 90 million-plus before Facebook changed its algorithm to promote high-quality content last December. And the site has been criticized for not creating enough original content, and finds its readers on social media, raising vital questions about whether viral journalism is just a phase and what kind of social networks consumers will be using in the years to come.

“I do think online interaction, unpleasant and annoying as it may be, is a really important form of accountability.” – The Intercept Editor Glenn Greenwald, “A Virtual Conversation With Glenn Greenwald”

Greenwald, who runs The Intercept for First Look Media and gained fame by writing scoops for the Guardian using documents from NSA leaker Edward Snowden, says he’s a big fan of Twitter. Labeling social media the “biggest difference between today’s online journalism and establishment journalism,” he said the value in Twitter is that it provides a place for varying viewpoints, especially critical in a situation like his. Greenwald said reading comments from his Twitter followers helps him to do better work and consider fresh perspectives. Historically, “You would never hear from your readers. [Journalists] were completely insular people who spoke to the world in monologue form…to passive readers,” and social has changed all of this. “If you are a journalist, you’re going to constantly hear from people…who have a lot of important things to say,” he said.

“[Success on Instagram] is about hitting that sweet spot.” – Time Magazine Director of Photography Kira Pollack, “Instagramming the News”

Pollack gathered with Time and AP photographer David Guttenfelder and Instagram Community Manager Dan Toffey to muse on iPhone photography’s impact on the news business. Pollack referenced an experiment Time tried during Hurricane Sandy, where she assigned five photographers to different areas and gave them access to the mag’s Instagram account.

“These pictures moved so fast,” she said. “[The story] was highly visual and it was told on social media,” essentially cutting out editorial oversight.

In 48 hours after Sandy, Time had 13,000 new followers on Instagram. Guttenfelder, who has covered the Israeli-Palestinian conflict, said Instagram is an immediate conduit to the people he is covering. He uses Instagram to photograph the needs of people surrounded by war and disaster, or just to show bits of everyday life that are part of a larger picture.

“Instagram is a place where I can take a picture that the AP or Time might not be looking for…but Koreans use mobile phones,” Guttenfelder said.

From an editor’s perspective, Pollack said newsrooms should be thinking, “How are we expanding our audience on Instagram?”

THE mobile future of journalism

“What [publishers] create in terms of native formats matters a lot.” – Cheezburger CEO Ben Huh, “The Form Factor Is the Message”

Ben Huh heads an operation with more than 50 online properties racking up 375 million page views per month through his Cheezburger Network. He said publishers and brands should always be thinking about how to adapt their content to a particular native format. He suggested that publishers be adaptable depending on how readers are consuming in that moment, and follow the reader/viewer’s lead. According to Huh, true success online (success meaning the content drives traffic and shares) is determined by a publisher producing work that can be consumed exclusively on a mobile device, if need be.

“Storytelling narrative is very different [today],” he said, and time is of the essence. Native content should have a “meaningful relation to [the consumer’s] life in short little bite-sized pieces…that doesn’t require much time.”

The mobile future of journalism

“If you’re a publisher and you’re not thinking about mobile, you should probably get out of the business.” – The Atlantic President Scott Havens, “Can Journalism Make For Good Business?”

Forty-five percent of all traffic to the Atlantic comes from mobile devices, Havens noted. Regarding ad strategies and content pushes, mobile is here to stay.

“The [ad] industry isn’t ready [for responsive ads], but publishers are. Publishers are going directly to these solutions.” – Starcom MediaVest Group SVP and Director of Mobility Webster Lewin, “The Best Mobile Ad Campaigns You Haven’t Seen”

Making profit off responsive ads and maximizing impact when banners have been the norm is a new challenge for publishers and brands, but Lewin and Drew Neisser, CEO at the New York-based social media and content marketing agency Renegade, and Rob Griffin, EVP and global director of production development of Havas Media, said Mashable’s Motorola Motomaker responsive ad signals a changing tide. Responsiveads.com boasts Forbes, the Interactive Advertising Bureau, Digiday and others as clients doing away with tired banners and adapting ads across devices. But mobile ads “shouldn’t be sexy,” said Griffin; they should just be functional and valuable to a reader.

THE financial future of journalism

”Think about your readers as customers.” – The Atlantic President Scott Havens, “Can Great Journalism Make For Great Business?”

The resounding theme of Havens’ talk? Yes, as the Atlantic and other top publications, it is possible for publishers to be in the black, and even growing, in today’s media landscape. But how? The Atlantic (133 events total) and so many others like the Texas Tribune, the Guardian and the New Yorker have built on their brands with sponsored festivals, paid reader clubs and merchandise offerings. “Follow the money,” Havens said, and keep looking for ways to diversify your revenue streams. Thinking outside the subscription model or paywall box takes the pressure off news organizations and has shown it can be quite successful.

What about advertising? At least at the Atlantic, Havens said it’s “actually sort of stable.” Not every publication has the luxury of being the third-oldest in the country’s history like the Atlantic, but he said he has a media theory that he believes rings true no matter the newsroom’s size. “Quality content drives a quality audience. This, in turn, drives a willingness to pay for [editorial] content; marketers want to reach these people.” To reach consumers, advertisers buy ads, and that revenue helps fund more high-quality content.

THE democratic future of journalism

In his Skype interview with Personal Democracy Media’s Editorial Director Micah Sifry, Greenwald suggested there is much more to be desired in the way of privacy and freedom in his NSA surveillance reporting.

“I’ve seen definitive evidence … that my communications are being collective monitored and surveilled [by the U.S. government,” he told the SXSW audience. Since he received hundreds of official NSA surveillance program documents from Edward Snowden, Greenwald said “many of the most shocking and significant stories haven’t been reported” on his new niche outlet The Intercept. Declaring privacy breaches, Greenwald called on the tech community and audience to use encryption and incite change in current government protocol.

“If you’re really upset about what the NSA is doing, the question should then be as an individual, what should I do to stop them? Individuals do have the principal obligation … to safeguard their communications,” he said. Greenwald’s ultimate goal in poring over the NSA docs and reporting on the state of mass surveillance? To “preserve independence and fearlessness in journalism.” Calling on traditional journalistic principles, he said he’s got a responsibility not to any news institution but to share the story with “maximum impact” so that the knowledge can generate change. Since he is confident his communications are being monitored as a result of his investigative reporting, is he afraid to move forward? a Twitter user asked. “If [journalism is], in any way, effective, it brings with it risks… you have to not let those things deter you,” he said.