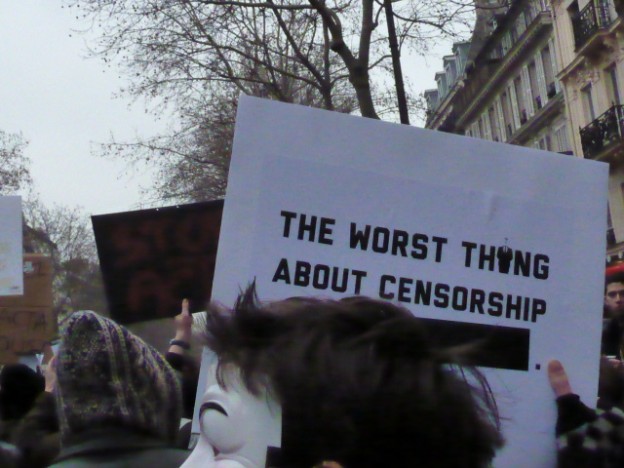 Photo by Lamessen under a Creative Commons License.

It’s a little bit of a man-bites-dog scenario — public high school administrators force a student newspaper to print what the students consider a racial slur.

The Playwickian, a student paper at Neshaminy High School in Langhorne, Pa., opted to stop using the word “Redskins” — the school’s mascot and athletic nickname — in its coverage. A staff editorial explained the etiology of the term and the process by which the decision was made to its student audience. The staff likely expected the issue to end there — until administrators overruled them, stating the decision was not the newspaper’s to make.

“It can hardly be argued that either students or teachers shed their constitutional rights to freedom of speech or expression at the schoolhouse gate.” -Justice Abe Fortas, Tinker v. Des Moines

The situation drew broad commentary, but perhaps none so intriguing as an editorial from the Union Bulletin, out of Walla Walla, Wash. Titled “Freedom of press belongs to school, not student editors,” the newspaper warned student journalists that freedom of the press belongs to owners, not reporters. If the students were unhappy with the school’s requirements, they could always create their own unaffiliated publication. That, the editorial noted, “is the First Amendment in action.”

If the members of this editorial board were issued actual journalism degrees, their colleges should be ashamed. http://t.co/5BltRiqiEM

Let’s clarify one important point: Not only does free speech apply to public school students, it is the default position of speech in schools. In Tinker v. Des Moines (1969), Supreme Court Justice Abe Fortas wrote, “It can hardly be argued that either students or teachers shed their constitutional rights to freedom of speech or expression at the schoolhouse gate.”

Government in the role of educator may have valid reasons to restrict student speech in the name of academic integrity, but such rationale must outbalance the widely held benefits of free speech. Four Supreme Court precedents suggest potential counterweights may be:

These cases not only suggest how student media may fare in a courtroom, but also what proactive steps students can take to avoid legal clashes in the first place. I call them the “Three Ps:” policy, practice and professionalism.

When the Supreme Court examined the question of student press censorship in Hazelwood v. Kuhlmeier, it turned to the school district’s official policies on student expression. The district allowed expression “within the rules of responsible journalism” and described the newspaper as a “learning laboratory” involving teacher supervision, course credit and grades.

The plain language of the policy suggested a tight connection between newspaper and school that created a reasonable assumption of school endorsement. Because the newspaper bore the school’s “imprimatur,” or mark, the school was allowed to regulate its content so long as it had “legitimate pedagogical concerns” for doing so.

Students and teachers seeking to avoid administrator censorship are well-served by thoroughly understanding their schools’ and districts’ student speech policies. If you are in one of the nine states that have statutes or administrative rules guaranteeing a degree of student expression and press freedoms — Arkansas, California, Colorado, Iowa, Kansas, Massachusetts, Oregon, Pennsylvania or Washington — know your state law, as well.

If you can’t find policy, work with your school board and administrators to create one. The SPLC offers several model policies to start the conversation. Pay close attention to language that spells out student responsibilities — policies are not intended solely to grant rights, but also to ensure students understand their burden should consequences occur.

The Hazelwood Court didn’t rest on the letter of the law — it looked at real-world application as well. Noting that the high school administrators regularly engaged in pre-publication review of the student newspaper, the Court argued that both policy and practice indicated an established expectation of administrative involvement in the editorial decisions of the student newspaper.

If policy is systematically ignored, then a new set of expectations may be created to establish parameters around the ability to regulate speech. To avoid this slow creep, be aware of how policy and practice regarding your publication may diverge. Don’t rely on a successful “practice” argument to sustain a challenge in court. Instead, affirm those positive practices by writing them into policy.

It’s harder to argue with good journalism. The Hazelwood Court noted schools had the right to disassociate from speech that was “ungrammatical, poorly written, inadequately researched, biased or prejudiced, vulgar or profane, or unsuitable for immature audiences.”

Consider Dean v. Utica Community Schools, in which a student challenged an administrator’s censorship of an article she had written regarding a lawsuit against her school. Katherine Dean thoroughly sourced and researched the suit, and her attention to detail paid off in the courtroom, where the judge noted “Defendants have not identified, and the Court cannot ascertain, a significant disparity in quality between Dean’s article in the Arrow and the similar articles in ‘professional’ newspapers.”

While it may sound like obvious advice, pay attention to newsworthiness. Strive for objectivity and reduce bias. Review the basics of libel and invasion of privacy — if needed, seek out resources at an area university or local law firms, as well as national organizations like NSPA, JEA and SPLC. Edit carefully for grammar, spelling and punctuation. Don’t give an administrator an obvious and easy reason to censor.

These “three Ps” establish reasonable expectations before misunderstandings can occur and help identify key issues that — should a clash between publication and administrator still arise — will be key to a legal argument.

Should that arise, in the words of Paper Lace, “Billy, don’t be a hero.” Student speech law is complex and can appear contradictory — don’t try to navigate it alone. Consult with the JEA or your local student press organization. Contact the SPLC for additional support and recommendations of resources. Advisers should remember that student speech and public employee speech are separate concerns — protect your job while you also work to protect the student press under your care.

Professional media also have a role to play. These young journalists need the support of their professional counterparts to advance in the field, better understand the rights and responsibilities of the press, and enhance their own media literacy. Instead of finger-wagging, partner with the student media in your area to support this next generation of practitioners, readers and subscribers. When student media seek to exercise their voices in order to best uphold their duties to their communities, it isn’t an “us or them” scenario. It’s a “we.”

That’s the First Amendment in action.