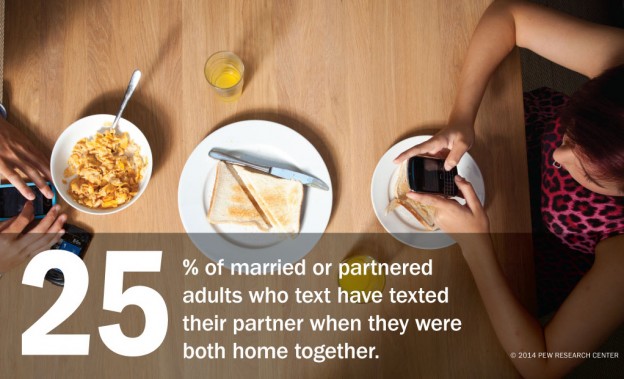 The Pew Research Center released stats this week from its report, “Couples, the Internet and Social Media.”

Our family scene at Emmy’s Spaghetti Shack last week is the perfect illustration of the study by the Pew Research Center on “Couples, the Internet and Social Media” that is being released this week.

I left my phone at home for our dinner out and as we sat waiting for our food to come, my 10-year-old son and I were locked in an epic battle of UNO while I also “ordered” food from my 5-year-old who was playing with his Playmobil pizza man. And my husband? AWOL. Oh, he was sitting there, jammed into the tiny booth with us. But when my youngest “drove” his pizza truck over to deliver a pizza to my husband, he didn’t even look up. He was checked out, checked in on Facebook.

"This message is reverberating throughout our society: Our relationship with technology is taking over our ability to be present in our interpersonal relationships."

The study released this week underlies what we see around us every day. Technology helps us in many ways, but it can also become the third wheel in a relationship — or in families.  Catherine Steiner-Adair, Ed.D., author of “The Big Disconnect: Protecting Childhood and Family Relationships in the Digital Age,” wrote that all too often now, “tech makes three” in time traditionally promised as “mommy and me” or “daddy and me.” It can be the same with date night for couples.

Tech Can Be a Source of Tension

The Pew study found that a quarter of adults with cell phones who are in serious relationships report that “the phone distracts their spouse or partner when they are alone together.” Thirty-one percent of parents reported that their partner was distracted by their cell phone in their presence, the study found.

These numbers are even higher for younger adults. Forty-two percent of 18- to 29-year-olds surveyed felt that a cell phone distracted their partner when they were together. Twenty-nine of those ages 30 to 49 years, said they felt that way.

And 8 percent of cell phone owners have had an argument with their spouse or partner about the amount of time one of them was spending online, the study found.

Everywhere you look — playgrounds, dinner tables, sidewalks and cafes — people are glued to their phones and tablets, texting and emailing or scrolling through Facebook. Children and loved ones constantly hear, “Just a minute” or a distracted “Uh-huh” as heads are buried into connected devices. This message is reverberating throughout our society: Our relationship with technology is taking over our ability to be present in our interpersonal relationships.

This is a struggle that impacts every family and couple I know. And while my husband is the bad guy in this story, I’ve been the culprit before. And even our 10-year-old son could sub in as digital addiction villain, with his constant refrain of “Just a minute,” as he finishes yet another level on Candy Crush or Minecraft.

But as the spokesperson for the National Day of Unplugging, which is coming up March 7-8, 2014, I am acutely aware of the importance of a balance in the use of technology. So I do stash my phone away when the kids first get home from school, so that I can give them uninterrupted attention. I often go without a phone when we leave the house as a family, if I don’t have a pressing work issue to deal with. And I (almost) never have it near me during meal times.

We are in no way anti-technology. The National Day of Unplugging recognizes the value and importance of technology in today’s world with the goal of encouraging people to be more mindful of their technology use.

The non-profit Reboot developed the annual tech detox to remind young, hyper-connected and frequently frantic people to take a regular respite from all things digital.

Adults and children are increasingly plugged into multiple digital devices across a variety of platforms including Facebook, Twitter, Snapchat and Instagram. Many toddlers even know how to use an iPhone or iPad before they can put together a full sentence. A recent study by Bridgewater State University found that the number of younger children who own mobile devices is increasing. The Bridgewater State University study found that 83 percent of middle-schoolers, 39 percent of fifth-graders and 20 percent of third-graders have mobile phones.

The news is not all bad though. Only 27 percent of online couples say the Internet has an impact on their relationship. Of that group, 20 percent say the impact was negative but 74 percent say it was positive, tying them to their partners with texts or other online communications.

“Young adults, who overwhelmingly use all sorts of social and digital media more than their older counterparts (smartphones, texting, social media sites) are also more likely to say it has an impact on their relationships, and to experience both positive and negative online experiences,” said Amanda Lenhart, a senior researcher at the Pew Research Center.

The report found that 21 percent of Internet users or cell phone owners who are in committed relationships have felt closer to their partner because of exchanges or conversations they had online or by text message. The technology is now even acting as mediator, with 9 percent of those reporting having resolved an argument with their partner online or by texting that they had difficulty resolving in person. That figure rises to 23 percent among 18- to 29-year-olds, the report found.

“Mediated communication allows us to more easily say things that are difficult to say to another person — for good and for bad,” Lenhart said. “It can allow you to apologize, and it can allow you to blunder and offend.”

Often the short texts I exchange with my husband throughout the day are the only “conversation” we have during the workday — or even before the kids are in bed, on particularly busy days. Sometimes the texts are about our kids, but other times they are just a quick way to connect.

That is in no way related to the fact that the study found that the amount of sexting is way up these days.

Tanya Schevitz is national communications manager for Reboot, an incubator of Jewish arts and culture. Reboot supports the National Day of Unplugging, from sundown Friday, March 7 to sundown, Saturday, March 8. Share what you do when you are unplugged by snapping an “I UNPLUG TO ____” photo. Upload it to www.NationalDayofUnplugging.com or post it to Facebook or Twitter with #unplug. Schevitz spent 16 years as a newspaper reporter, including 12 years at the San Francisco Chronicle, where she covered higher education.