What Obama’s Vision of OFA Means for Crowdfunding 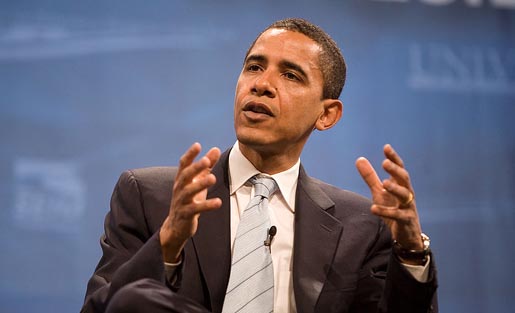 President Barack Obama. Photo by the Center for American Progress Action Fund and used here under the Creative Commons license.

It’s unlikely to be just one of the above, and surely differs across contexts. But there are instances that present one vision over the others. Last week, President Obama made a clear appeal to the last category, ownership, by tweeting this image about Organizing for Action.

"There’s a lot of work to be done before civic crowdfunding can sustain large-scale, long-term projects -- projects that may not be immediately successful and may have to deal with failure along the way."

Let’s remind ourselves that “ownership society” was an expression used by George W. Bush to justify tax cuts, and was a concept popularized by Margaret Thatcher as a rationale for privatization. I’m not suggesting Obama has morphed into either of the above, and campaign fundraising is a different world than domestic policy or civic crowdfunding, but the weight of his words shouldn’t be underestimated. Obama’s successive fundraising triumphs have had a talismanic effect: Many of the civic crowdfunders I’ve interviewed cite Obama’s campaign fundraising success as a direct inspiration for their projects.

So how does Obama’s use of entrepreneurial and ownership rhetoric affect the framing of civic crowdfunding? First, let’s think about the other visions of large-group civic fundraising with which it is competing.

Urban sociologists have spent the past century arguing about the ties that bind us and the notion of community. In the nineteenth and early twentieth century, a core idea was that urbanization has moved us, in Ferdinand Tonnies’ terms, from Gemeinschaft (association based on kinship ties and ethnic or cultural homogeneity) to Gesellschaft (association based on shared values). Put simply, the idea that people living in urban areas could gather and act collectively using agreed-upon ideas rather than loyalties to kin, which he said dominated (and held back) rural society. The Gemeinschaft — Gesellschaft distinction has since been discredited as a great oversimplification; scholars have sought to understand the multi-variate factors that bring people together in spaces, such as political economies and geographic factors. But it’s a good starting point for thinking about whether civic crowdfunding draws on communities of ideas rather than groups of people who have historically been attached to a place.

The very idea that communities should be understood primarily as placed-based phenomena was challenged pretty decisively in 1979 when Barry Wellman applied network science to human relations in his paper “The Community Question.” He wrote that previous scholars had successively fretted about the “loss” of community in urban spaces and then sought to “find” community again by focusing on analyses of activity in a given place. Wellman’s argument was that both these approaches were missing the importance of ties between people — connections between family members who either travel to each other or speak regularly on the phone — as a representation of “community.” In other words, my community is the people with whom I retain contact and from whom I derive support. The application of these ideas to Internet social networks are clear and powerful, and we know that the majority of traffic to crowdfunding pages is derived from social media referrals. The community that gathers around a campaign depends heavily on these ties.

But campaigns rarely appeal to just one community, or network of ties. The community of people that Backer A refers to a crowdfunding campaign will be different than the community referred by Backer B. Backer B may make more referrals in person, on the phone, or at a social event for a specific cultural group to which he or she belongs. So how can we differentiate these types of community? Steven Brint suggests there are five basic kinds of community.

For Brint, communities are distinguished by whether they are based on beliefs or activities, and whether members’ primary means of interaction is in person or remote. Civic crowdfunding complicates both of these distinctions. We’re dealing both with the geography of project locations — where a project will be built — and the geography or network of people who support it. Can we identify a place-based community around a specific project, for instance a group of people who share a loyalty to the city where a project is being built? Or are people’s loyalties to the platform itself? Does a person who supports the goals of IOBY feel compelled to support many different projects on the site for that reason alone?

My sense is that successful civic crowdfunding campaigns channel all of Brint’s five types of community, with larger campaigns demanding more emphasis on types 4 and 5 to achieve scale. But we shouldn’t skip types 1-3 too quickly, especially as those who see crowdfunding as simply social media-fueled participation are liable to do. It’s my hypothesis that successful civic crowdfunding campaigns typically begin by raising money close to the geographic area of the project, and that demonstration of support or momentum supports the spreading of participation to wider networks. In other words, there are multiple, sometimes distinct and sometimes complementary, communities that are activated at different stages of a project.

Crowdfunding as participation and agency

Civic crowdfunding, particularly of projects in the public realm, is attractive to some people because of the opportunity for participation that it offers. A project can be framed as an open invitation to individuals to intervene in local planning: the kind of invitation that is rare outside of statutory public consultation processes, which are as maligned as they are lengthy. Of course, planners have been thinking for several decades about how to improve these processes, make them participatory and transfer agency to the people who are affected by the outcome — from Arnstein’s famous “Ladder of Participation” to the more recent participatory planning work of Caesar McDowell, Mario Luis Small and others.

A community-organized civic crowdfunding campaign could perhaps be seen as an extension of these principles: a new tool in the armory of a community organization wanting to exercise agency over their members’ environment. Moreover, civic crowdfunding is occurring after more 10 years of intensive experimentation with symbolic money as a representation of that agency — the tax dollars that are open for use and negotiation in participatory budgeting. But let’s mention two very important caveats.

Firstly, at the time of writing, civic crowdfunding websites don’t offer the type of deliberative process that most participatory planning practitioners would deem an essential feature of community agency. Carl DiSalvo argues that “agonistic pluralism” or the capacity for dissent and disagreement when making decisions, is critical when designing with a community. Ben Barber writes that “strong democracy” exists only when deliberative processes reach the grass roots of institutions. If the only options for participation in a process are to green light or reject a project, how does crowdfunding support consensus building within a diverse community? Much of this work would have to be done prior to the campaign.

Secondly, crowdfunding in its current form also requires that participants have real dollars to vote with. The presence of real money introduces differential agencies and prevents a direct comparison of civic crowdfunding with participatory budgeting or taxation-based initiatives. While to a limited extent, there is collective ownership inherent in being a taxpayer, when was the last time you heard Obama tell the American people they “own” Medicare? Or that they own the Defense Department? The distinction is that Organizing for Action is a political campaigning body and not a public service. So in what sense do individuals “own” civic crowdfunding projects?

What can happen when real money changes hands, as it does in civic crowdfunding, is that the notion of ownership is crystallized and made direct. Though current platforms don’t support equity ownership of projects, backers can be said to have “skin in the game.” For some, this is a positive step. Silicon Valley’s newest generation of wealthy entrepreneurs, for instance, seem to favor a more direct form of philanthropy (giving directly to specific projects) in order to feel ownership of a cause, and to know exactly how the money is being spent. In a similar way, it could be argued, responsible citizens want to exercise agency as investors in their community.

We could also cast this type of ownership as another instance of social enterprise. Alperovitz suggests that the recent rise of worker-owned co-operatives, public enterprises and credit unions are examples of “wealth-democratizing, institution-building trends” that are shifting the organization of capital away from corporations and towards individuals and communities. Civic crowdfunding backers therefore own part of something that is inherently quasi-public, and crowdfunding campaigns are a means to build better institutions, literally, from the ground up.

But for others the rise of new ownership concepts is evidence that the logic of financial transactions is becoming ubiquitous in all aspects of life. This shift is part of a larger offloading of risk from institutions to individuals, says Gina Neff, drawing on the work of Jacob Hacker. It’s a move towards Bush’s vision of an ownership society. The intrinsic problem, according to Neff, is that while individuals perceive that they possess greater agency as entrepreneurs, they are being asked to shoulder risk that they’re unable to conceptualize or manage effectively. Her book “Venture Labor” follows the embrace of entrepreneurial culture by individuals in New York’s Silicon Alley during the first dot-com bubble; among its findings are two striking trends: individuals’ tendency to blame themselves for the failure of their companies, and their lack of attention to systemic factors that may be influencing their lives.

If civic crowdfunding is offering ownership to individuals and communities, are they aware of the risks and consequences of failure? And do we accept that the burden of risk should fall on individuals to ensure that communities are well resources with parks, community centers and common resources? Save for advocates of a Colorado Springs model of stripped-down government, the answer to the second question is probably “no.” In addressing the first question, there’s a lot of work to be done before civic crowdfunding can sustain large-scale, long-term projects — projects that may not be immediately successful and may have to deal with failure along the way.

Simply tapping people’s desire to own something may not be the right way to get to scalable, sustainable civic crowdfunding — because everybody wants to own a successful enterprise, but no one wants to own a failure. The good news is that there are many different ways to mobilize people for social impact, and civic crowdfunders should think about as many of them as possible.