How to Track the Life of a Story With Twitter Analytics 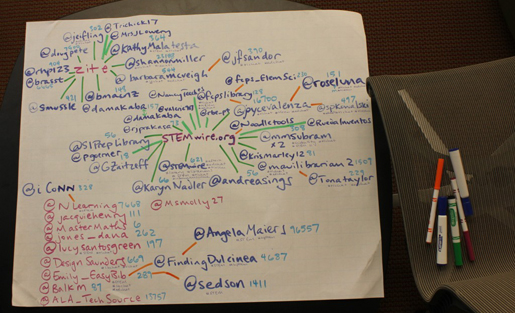 One ‘node’ of our Twitter map. (Photo credit: Hetali Lodaya)

It’s no secret at Reese News Lab that I’m obsessed with Twitter. From live-tweeting webinars to eavesdropping on summer startup meetings and broadcasting some of those gems to the world, I am convinced of Twitter’s value as an information-spreading platform (and am happy to take any converts along for the ride).

"If you want a lot of people to read something, find a way to get librarians to care about it."

But just like any tool, to really get the most of Twitter, you need to understand how it works. Not just what happens when you push the tweet button, but what happens after you send a link out into the world. Who shares, why and how? What hashtags matter? What time of day should you share to get maximum traffic?

Lesson No. 1: Get Librarians to care about it

We decided to follow a story about school librarians and STEM around Twitter for a week to try to answer some of these questions. In retrospect, this turned out to be a great story to examine. We’re not sure whether it was because the keywords were particularly search-compatible, or whether librarians just like to share a lot, but within a day this story had become the most-viewed page on our website. As of this writing, it represents 15.5% of our entire site traffic in the past month.

So there’s your first lesson: If you want a lot of people to read something, find a way to get librarians to care about it.

After meeting with JoAnn Sciarrino, the Knight chair in Digital Advertising and Marketing, we decided to look more at networks. Specifically, who are “powerful” tweeters whose tweets end up getting re-shared fairly often? Who are “popular” tweeters who have a lot of followers to see anything they put up? Some combination of those two groups will probably contribute to the overall reach of your story, so you have to find a way to reach each kind of user.

There’s a lot of Twitter analytics software out there, but we started with the basics. If you put a link into the Twitter searchbar, it will show you every tweet that shared that link in the past seven days. We began with a manual map that linked shares in green, RTs (retweets) in orange, and OPs (original posters) in purple.

We learned that a lot of librarians use Zite, a news aggregator, and that our story had done a pretty good job showing up in their searches. Hashtags like “tlchat” (teacher-librarian chat) might have helped get us into the librarian-sphere initially, but it’s hard to tell whether they mattered much in later sharing. Some people use them and some don’t. And for the future, hitting “expand” in the Twitter search function is important. It shows you who retweeted a given tweet after the first instance. I didn’t notice that when initially making the map, so we’re probably missing a number of shares.

We will hopefully work with Sciarrino to develop a more rigorous procedure for analyzing this data in the near future. In the meantime, I’m trying not to get too hung up on constantly refreshing Google Analytics and our Twitter stats at the expense of working on other things. Data is fun, but as Bill Gates reminds us, “content is king.”