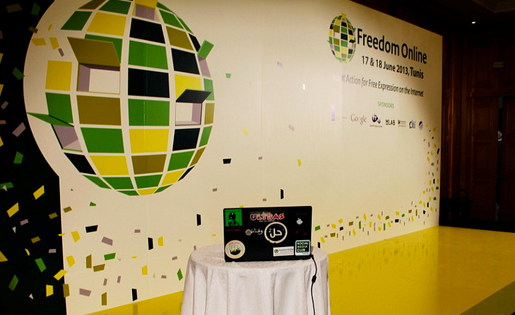 Surveillance was a big topic at this year's Freedom Online Coalition conference in Tunisia.

Two years ago, a group of governments came together in The Hague to form a coalition committed to respecting human rights and fundamental freedoms as outlined in the Universal Declaration of Human Rights.  At the initial event, then-Secretary of State Hillary Clinton addressed the audience with a call for universal human rights to apply online, stating:

This is an urgent task. It is most urgent, of course, for those around the world whose words are now censored, who are imprisoned because of what they or others have written online, who are blocked from accessing entire categories of internet content, or who are being tracked by governments seeking to keep them from connecting with one another.

Dubbed the Freedom Online Coalition (FOC), the group has grown in the past two years from 18 to 21 countries, with representation from every region of the world.  This year’s conference was held in Tunisia, a country which for all intents and purpose has made an astonishing turnaround in the past two years from being a mainstay on Reporters Without Borders’ Enemies of the Internet list to fighting against attempts by various entities to reinstate the country’s censorship regime.  While it’s important to note ongoing threats to free expression—in the days preceding the conference, a rapper was sentenced to two years in prison for insulting police—the tenacity of the Tunisian Internet Agency (ATI) in fighting for a free and open Internet must also be acknowledged.

"We are not going to have a free and open global Internet if citizens of democracies continue to allow their governments to get away with pervasive surveillance that lacks sufficient transparency." -Rebecca MacKinnon

The ATI, once Tunisia’s censorship and surveillance apparatus, has aimed to become the country’s neutral Internet exchange point (IXP), pushing back against numerous attempts over the past couple of years to force it to censor. The ATI’s commitment to openness was made concrete in the run-up to the conference when its doors were opened to hackers to create the #404Lab, a space for innovation. Those present were invited to investigate the 2007-era censorship equipment left over from the Ben Ali regime.

Eleanor Saitta, a security expert who was present for the opening of the hackerspace, stated: “While this equipment is outdated, it’s the first step in establishing a one-of-its kind resource in the larger Internet freedom community, and I think it’s both telling and important that it happened in Tunis first.”

The formal event kicked off with a day of trainings on security, secure hosting, and other needs expressed by the community.  From the secure training emerged a coalition “aimed at, among other things, setting standards for how hosting in high-risk environments should be done,” Saitta said.

On the first day of the official event, the New America Foundation’s Rebecca MacKinnon set the tone for the conference in a keynote, stating:

“We are not going to have a free and open global Internet if citizens of democracies continue to allow their governments to get away with pervasive surveillance that lacks sufficient transparency and public accountability – mechanisms to prevent its abuse against all Internet users wherever they are connecting from.”

That sentiment was echoed throughout the conference as civil society activists from various countries took to the stage to confront governments on their surveillance practices. In light of the recent revelations about the National Security Agency’s mass spying, surveillance was a point of contention amongst the conference’s various constituencies, threatening to create a divide. But as Anja Kovacs of the Internet Democracy Project in Delhi put it, “Ironically, [the unity felt by civil society activists was] in part facilitated by the PRISM scandal hanging over the conference.”

Surveillance: The Topic of the Day

The side event held at Nawaat (Photo by Jillian C. York)

A side-event organized by civil society actors and hosted by local media collective Nawaat focused on a robust and inclusive discussion of surveillance, led by Saitta and activist Jacob Appelbaum.  The discussion inspired a call to governments from civil society to adopt and comply with the International Principles on the Application of Human Rights to Communications Surveillance, presented in the final plenary of the conference by Nawaat co-founder Sami ben Gharbia.

As the call to governments notes, the civil society takeaway from the conference manifests as a desire to see the FOC become a platform for constructive multi-stakeholder debate, but also a means through which civil society can keep an open line of communication with governments.  As Emily Barabas of the Center for Democracy and Technology so aptly puts it in her roundup of the event:

“The [Freedom Online Coalition] should seize the opportunity and take concrete steps, spearheading efforts to restore the trust of domestic and global citizens. It’s time to use PRISM to launch a constructive dialogue about how to improve domestic and international surveillance standards moving forward. Next year’s meeting in Tallinn, Estonia, would be an excellent opportunity to evaluate how much progress has been made in achieving policy environments in which security and freedom truly co-exist.”

Full disclosure: I served on the steering committee for this year’s conference.

One response to “Freedom Online Coalition Takes On Surveillance, PRISM in Tunisia”