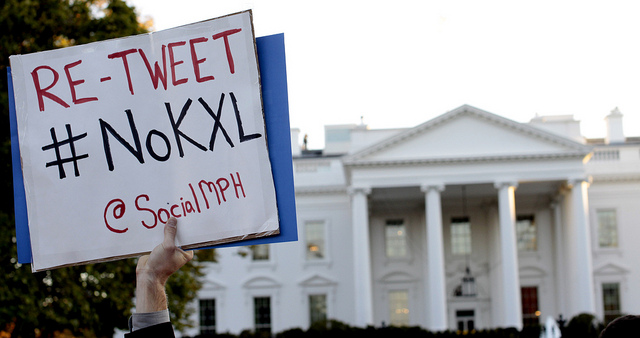 Journalists still need protections while covering protests. For instance, journalists have been detained and abused while covering "KeystoneXL pipeline actions":http://storify.com/jcstearns/journalist-arrested-at-tar-sands-blockade. Photo by "tarsandsaction":http://www.flickr.com/photos/tarsandsaction/ via Flickr.

I’m not one to make predictions about the future of our media. I’m much more interested in prescriptions. Rather than talking about what we think might happen, let’s discuss what we agree needs to happen and how we might get there. The media isn’t just something that happens to us — it is something we can and must be part of creating and reshaping ourselves. Here are three critical issues we must tackle in the coming year.

As we enter into 2013, the Federal Communications Commission is poised to relax the long-standing newspaper/broadcast cross-ownership ban. And as if more media consolidation wasn’t bad enough, the way their proposal is currently written will disproportionately impact media ownership by women and people of color.

Rather than talking about what we think might happen, let's discuss what we agree needs to happen and how we might get there."

Although fostering media diversity is part of the FCC’s congressional mandate, it has taken the FCC 13 years to get around to issuing a comprehensive report on who owns the media in America. The results, just released this fall, were dismal. Although women make up more than half the population, and people of color account for well over one-third of the nation, the FCC data shows that women own less than 7 percent of radio and TV stations and people of color own just 5 percent TV and 8 percent radio stations. Rather than taking steps to address this, the FCC is about to make it worse.

The 4th Estate’s infographic on women in media coverage of the election. Click image to see the entire graphic.
ADVERTISEMENT

But media diversity isn’t just an issue of media ownership. In April the American Society of News Editors reported that the “percentage of minorities in newspaper newsrooms continues to decline.” The numbers have never been good — only 13 percent at its peak in 2006 — and the ASNE census found that in 2012 only 12 percent of newsroom employees were people of color. In addition, the media analysis group 4th Estate found that women were widely underrepresented in media coverage of the election, even when discussing key policy issues facing women.

In 2013 we need to halt the FCC’s rush towards more media consolidation, begin making clear steps towards fostering greater diversity in media ownership, and hold our local and national media accountable to represent the diversity of our nation in their coverage and their employment.

While much was made about journalist arrests in the early months of the Occupy movement in 2011, the fact is that the number of reporters harassed and arrested in the United States in 2012 is almost exactly the same as in 2011. The difference is that these arrests have spread well beyond Occupy protests at this point. Journalists have been detained and abused while covering KeystoneXL pipeline actions, at political conventions and NATO protests and even just while going about their everyday work.

As the year drew to a close, both the Committee to Protect Journalists and Reporters Without Borders declared 2012 as one of the most deadly and dangerous years for journalists worldwide. Around the globe and here in the U.S., we’ve seen a troubling spike in attacks on independent, freelance and digital journalists. These attacks come in the form of both physical threats and the slow and dangerous creep of surveillance and secrecy. This comes at a time, of course, when more and more media are relying on independent journalists and citizen journalists to cover critical events around the world.

In 2013 there will continue to be conflict and tension brought about by how we understand and enact the First Amendment in our digital age. I’m hopeful that court cases will continue to reinforce what the Department of Justice has already made clear: that citizens have a First Amendment right to record. However, as the tools of media making are put in the hands of more and more people, part of the responsibility to defend our First Amendment rights must also be put in their hands. In 2013 we need to mobilize more people to join the fight for our digital rights.

In local communities around the United States and on the national stage we are seeing more and more collaboration between new non-profit journalism organizations and longstanding public broadcasters. As we turn the corner into 2013, we need to take a hard look at the barriers that still exist between the various sectors of noncommercial media in America and begin to imagine a more unified whole.

This means we need to come together to change the debate about non-profit and public media in the U.S. No longer are non-profits and public media organizations a marginal “alternative” to mainstream media. More and more journalists are investing in non-profit journalism, and more and more Americans are turning to public media online for their news and information. Even commercial media is relying on partnerships with non-profits to do much of the critical, investigative and accountability journalism that has disappeared from the TV networks and even some papers.

Public broadcasting took center stage in the presidential election for weeks this past fall, sparking a huge public outcry and reminding policymakers that NPR and PBS stations are deeply valued by the vast majority of Americans. And over the last year we have begun to see a small thaw in the glacial pace of IRS approval for non-profit journalism. Finally, 2013 is the year the FCC will hand out thousands of new non-profit radio licenses. It is critical that we build on this momentum in 2013 to expand and diversify noncommercial media on and offline.