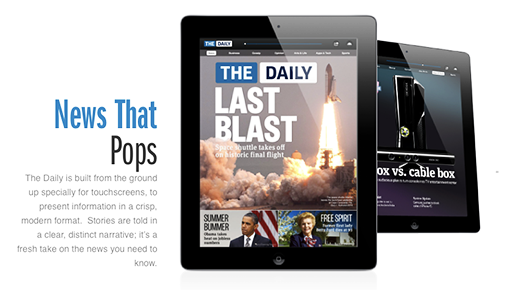 Was News Corp.'s The Daily a failed publication or a successful experiment in publishing? Depends on how you look at it.

As news spread on Monday that The Daily, the 100,000 subscription, tablet-only news magazine would shutter before the end of the year, a torrent of analysis sprung up to explain how and why 2010’s great media experiment failed to take off. There is no shortage of reasoning behind The Daily’s untimely demise — particularly in the world of media, where taking a chance on new publishing concepts usually attracts as many well-wishers as it does a gleeful death watch.

Still, rather than dancing around The Daily’s still-warm corpse, publishers ought to think of it as one of the most valuable post-mortems of the year: a fairly groundbreaking news R&D lab that mistakenly thought it ought to be a daily publication.

Rather than dancing around The Daily's still-warm corpse, publishers ought to think of it as one of the most valuable post-mortems of the year."
ADVERTISEMENT

What we know at this point is this: The Daily failed to generate the number of subscriptions necessary to break even (500,000) because it entered a saturated “general news” environment as a new brand, without the benefit of an existing subscriber base. That is to say, rather than function as an add-on app for a news brand, it tried to attract readers into a siloed content environment, and it banked its success on the allure of the tablet reading experience.

Even two years ago, skeptics made the case that existing as a sharing-averse publication would ultimately prove the final straw for The Daily — a fatal disconnect from the web itself for a stand-alone product. Still, only a few years ago this judgment might not have been so easy to make. Likewise, the origins of the publication itself, closely tied to Apple and the iPad’s initial launch, indicate that the decision to remain tablet-only was likely an oversell on the new format. Let’s not forget the massive hype that surrounded the first-generation iPad, hardware which was widely thought of as the harbinger of magazine and newspaper publishing 2.0.

Financially, the $30 million-plus that went into The Daily pre-launch (and the $30 million in losses it allegedly generated each year for News Corp.) is far from a ruinous investment. What is more interesting about the investment, however, is that it produced a core app that is set to live on long after The Daily itself is relegated to news startup history.

Over at Quartz, Christopher Mims rightly oriented his piece to highlight the valuable insights that The Daily’s brief life produced, such as early experimentation with Facebook using Open Graph; an early victory in producing a tablet app which populated content within a very small file size; and the world’s first recurring billing and subscription model for a tablet app.

Did Rupert Murdoch ‘Give Up’?

The question that many media watchers are now asking is whether Rupert Murdoch simply abandoned The Daily to its slow, lingering death by failing to inject new funding, particularly at a time when the news mogul is likely concerned with his larger properties, and the ongoing legal implications of the phone-hacking debacle.

As Jack Shafer puts it: “The Daily demonstrates for the umpteenth million time that big media isn’t very good at creating new publications, be they new magazines, new newspapers, or new websites.” There’s no denying that The Daily was a miscalculation as a publishing concept, and considering the expense of its editorial talent vs. returns it was something of a no-brainer, but one can make the argument that big media isn’t all that terrible at putting together an R&D lab.

In terms of technology, Matt Buchanan makes a strong case for The Daily as floundering because of “resource-starved engineers doing their best to build, ship and maintain a product with near-impossible deadlines and goals.” At the time of The Daily’s launch, publishers hardly knew how to handle the tablet, and the pressures of maintaining a daily read that would live and die on the basis of a tablet experience may have been a poor call from the beginning.

The Impossibility of Tablet Reading

But does that make tablet-native content a structural “impossibility,” as Felix Salmon postulates? The unsatisfying conclusion is both yes and no. Yes, a siloed tablet experience such as The Daily was likely doomed, but that doesn’t mean that others have not followed in its footsteps with more viable business models. Examples such as The Magazine, or the multi-platform The Atavist, and more recently The Awl’s Weekend Companion seem to point the way ahead, and all with the benefits of the past two years of app development, knowing what works, and far more insight into tablet subscription models — knowing what people are willing to pay for.

What’s more, within existing brands, offerings by Hearst (Cosmopolitan being the No. 1 magazine in the world of tablets, with 180,000 subscribers) prove that potential readership at this point is nothing to sneeze at. Ironically, as Hearst President David Carey remarked as recently as last week, the conclusion that they’ve drawn is that most readers are looking for an enhanced, mobile version of a magazine — not a whole product.

So then why did Murdoch give up on The Daily? The unfortunate conclusion seems to be that, despite its editorial talent (and it did have talent), it was a financially sound decision to end the publication. The failure seems to be that, rather than having focused on what The Daily did best, which was to experiment and perfect tablet publishing, it was persistently hammered into a narrow content delivery experience in an extremely competitive market. Ironically, what News Corp. failed to leverage was its own web footprint and content, stories that could have been fed through the app to provide a richer content experience and broaden its appeal, and an embedded existence into those publications’ web traffic.

As of 2012, 29 percent of adults in the U.S. own a tablet or e-reader — this is up from 2 percent less than three years ago — a meaty number that suggests that The Daily, even if it failed to find its footing, was a worthy attempt and surely only one of the first attempts to capture the tablet market.

Leandro Oliva is a freelance writer based out of New York City, and the social media and newsletter manager for PBS MediaShift. He contributes to VICE Motherboard, Business Insider, and has appeared in The Awl, Ars Technica and GlobalPost, among others.