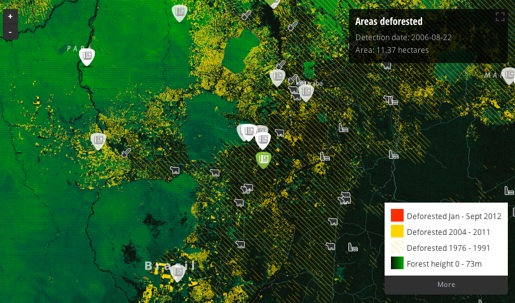 For environmental journalists around the world, a lack of access to data on issues from oceans to sanitation can make it hard to report accurately on projects and policies. But technology may be changing the game.

“Recent advances in technology have the power to revolutionize transparency within the sustainability movement,” said Manish Bapna, acting president of World Resources Institute (WRI). He believes this could “transform the way we look at a wide range of environmental issues.”

It used to be just scientists using this type of information, but now many of us have information on our phones that use satellites." -Gustavo Faleiros.

With global climate change investments on track to reach an estimated $700 billion by 2020, a lack of transparency increases the risk of corruption in political decision-making, financing of climate change projects, and the management of public funds. And it can confound journalists looking for reliable information.

“Any forensic audit of why our oceans, forests and fossil fuels have been exploited the way they have would point to corruption and the absence of transparent and effective government as the key culprit,” Greenpeace International Executive Director Kumi Naidoo said at a recent panel in Brazil on transparency and the environment.

The panel was part of the 15th International Anti-Corruption Conference held by Transparency International. Knight International Journalism Fellow Gustavo Faleiros, the panel’s moderator, said journalists can play a key role in combating corruption, and increasing transparency and accountability. With more environmental data being made available and usable, journalists are in a good position to understand and share those findings with citizens and stakeholders, he said.

Faleiros’ fellowship project uses that model. InfoAmazonia provides timely news reports about the endangered Amazon region, calling upon satellite data on deforestation and forest fires, and other open data. A network of partner organizations and journalists deliver data and news to InfoAmazonia from the nine countries in the Amazon region. The data used are available for free download and updated frequently.

Maps have long been used to monitor deforestation. But now, Faleiros said, data are becoming more accessible to journalists, and digital analysis is allowing them to better understand what the data mean. “It used to be just scientists using this type of information, but now many of us have information on our phones that use satellites,” Faleiros said.

WRI, a Washington, D.C.-based environmental think tank, also relies heavily on mapping to track a range of environmental topics, from coral reefs to forests. At the conference in Brasilia, Bapna announced that WRI’s Global Forest Watch plans to launch a more collaborative version of its map. In addition to pulling and displaying open data, the map will allow citizens and researchers on the ground to contribute stories about and photos of what is happening in forests.

“Now we can detect illegal logging anywhere in the world in an instant using satellite imagery,” Bapna said. “It’s revolutionizing how we look at transparency and creating a type of power and mobilization that we need.”