How Link TV + KCET Plan to Give Context to Global, Raw Video 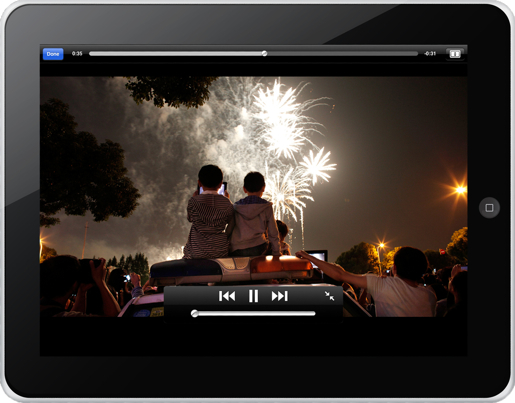 A screen from the "LinkTV World News app for iPad":http://news.linktv.org/apps, which pulls in news and videos from mainstream, state-run and alternative news outlets and the curated eyewitness raw videos from 125 sources across the world.

In the warp-speed evolution of the digital era, it’s hard to remember 2005. Facebook was still just a tool for U.S. college students; Friendster and MySpace were the hot social-media sites; Twitter was in utero; now-behemoth Huffington Post was in its infancy. But it was also the same year YouTube co-founder Jawed Karim posted the first-ever YouTube clip, “Me at the Zoo,” a charming, relatively forgettable 19-second video.

In the mere seven years since we saw Karim talk about elephants at the zoo, the development of the depth, range and sheer volume of available “raw” videos on YouTube has been nothing short of breathtaking — matched only by our apparent appetite for them.

The impact and potential of raw videos to galvanize public opinion, set the media agenda, and sometimes shock us into new awareness may not have been fully anticipated by YouTube's founders (or maybe it was)."

So why do we watch? Because most of us are voyeurs, of course. But the impact and potential of raw videos to galvanize public opinion, set the media agenda, and sometimes shock us into new awareness may not have been fully anticipated by YouTube’s founders (or maybe it was).

Consider just a small sampling of moments in which raw videos have changed the world — or have helped shape social movements and actions: Syrians take to the streets following the 2011 Arab Spring uprisings in Tunisia and Egypt; 26-year-old Neda Agha-Soltan is shot and killed in 2009, generating support for Iranian protesters; activist Asmaa Mahfouz calls for protests in Tahrir Square in a video that is known as the spark for the Egyptian revolution.

Now Link TV is trying to bring context with a mix of raw and produced video. The big idea — to “reinvent world news and social action for the digital age” — became the newly launched LinkTV World News app for iPad, which pulls in news and videos from mainstream, state-run and alternative news outlets — and the curated eyewitness raw videos — from more than 125 sources around the world, most of which are unavailable outside their originating countries.

And now that Link TV and KCET have joined forces, there will be an increased focus on developing new technology and programming for web and mobile. But I’ll get back to the expected merger in a moment.

First, let’s think a bit more about raw video. But beyond galvanizing moments, there’s new data that show our willingness to think about raw videos as sources for information about world events. In fact, a study from the Pew Project for Excellence in Journalism recently revealed that unprecedented numbers of us turn to raw videos via YouTube during major global news events.

As a case in point, according to the study, “YouTube & News,” in the case of the earthquake and tsunami that devastated parts of Japan in March of 2011, “the 20 most viewed news-related videos on YouTube all focused on the tragedy — and were viewed more than 96 million times.” According to the authors, “The data reveal that a complex, symbiotic relationship has developed between citizens and news organizations on YouTube, a relationship that comes close to the continuous journalistic ‘dialogue’ many observers predicted would become the new journalism online. Citizens are creating their own videos about news and posting them … Consumers, in turn, seem to be embracing the interplay in what they watch and share, creating a new kind of television news.”

But different findings from Pew reveal that consumers’ trust in “traditional news” has reached an all-time low. To be sure, we need investigative journalism and quality reporting more than ever, but would it be fair or plausible to wonder if the juxtaposition of these two trends demonstrates we’ve grown impatient with a filtered perspective? Or simply that we’re hungry to access the direct perspectives and experiences of people on the ground actually experiencing global news events?

But still, how can we wade through 20,000 raw videos labeled “Libya” and make connections with the broader news context and voices on the ground? That’s the challenge — and the key to accessing relevant raw videos without spending 20 hours trying to figure out which ones are good.

A Different Kind of Filter

So the answer is not the total elimination of a filter, but perhaps just a different kind of filter that leverages the increasing (assumed) ability of news consumers to understand curated news from multiple sources — but also incorporates and positions “raw news” right next to other news sources for a full information-gathering experience.

Link TV, the indie broadcaster with whom I work, is attempting to do just that. Last year, Link TV teamed with social justice-focused Bertha Foundation to create a digital news operation that would place global news videos from broadcasters around the world side by side with curated relevant raw videos, next to documentaries that offer more context, next to translated social media chatter from around the world.

The Link TV World News app’s team of 20 multilingual editors and journalists filters through more than 50,000 news sources — from major newspapers to small local blogs — to provide users with deeper context around every video story. And for major news events like the unfolding stories in Libya and Pakistan, LinkTV World News creates in-depth sections featuring a timeline of related video, round-ups of relevant updates from Twitter, and up-to-the minute articles. A “Take Action” tool allows users to personally get involved by donating, volunteering, signing a petition, and more, directly related to the stories they are seeing and hearing.

Last month, Link TV and KCET, the largest independent public television station in the country, announced a merger to create a new transmedia independent network. The planned KCETLink will be available in 33 million households via DIRECTV and DISH Network and 5.6 million households on KCET in Southern California, the nation’s second-largest television market. Among other priorities, the expected merged organization will focus on developing new technology and programming for web and mobile, including an upcoming global news app for Google TV, along with continued and new global, cultural entertainment and world news.

From a programming perspective, the short-form video revolution started by YouTube in 2005 has already demonstrated a permanent shift in audiences’ willingness to be entertained by — and even demand — shorter bits of video content and storytelling. Consider the still-new presence of original short-form webisode YouTube program channels from Disney and other top commercial entertainment brands, as well as a big announcement just a few weeks ago about 60 original-content channels in Europe, including a few BBC channels.

And the ways we’re using YouTube is changing dramatically; according to YouTube, traffic to the site from mobile devices tripled in 2011, and now more than three hours of video are uploaded to YouTube every minute from mobile devices. Even by the warp-speed standards of the digital revolution, that’s hyper-drive warp speed.

So the question is, as YouTube becomes the world’s biggest global transmedia network, will its new audiences know and remember just a few years ago — the Arab Spring uprisings, aided by raw video and social media? Will raw videos still be able to shape global social movements? In so many ways, despite the dominance of advertising and commercial interests on YouTube, raw videos and the context around them are so perfectly fit for the domain of independent media. We just have to remember 2005.

This story has been altered to better explain that the merger is expected, but not yet completed.

Caty Borum Chattoo is a strategist and producer with independent broadcaster and media organization Link Media and Executive in Residence at American University’s School of Communication in Washington, D.C., where she also serves as Director of Strategy for the Center for Social Media. To download and learn more about the LinkTV World News iPad app, visit http://news.linktv.org/apps