Commentary: Why Big Bird is a Red Herring 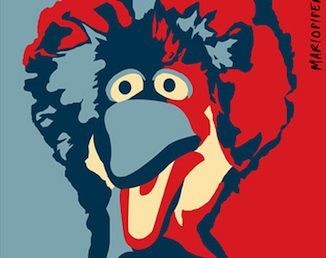 Poster by artist Mario Piperni, made available under a Creative Commons license.

The following is an opinion piece by Amanda Hirsch; an earlier version of this post appeared on her blog.

Every time someone threatens to cut PBS funding (as Mitt Romney recently did), its supporters play the Big Bird card. “Surely, Mr. Grinch, you won’t rob the children of their Big Bird?”

Using Big Bird as a symbol of PBS's value is disingenuous and obscures the legitimate questions of (a) whether PBS is essential and (b) whether it should be federally funded."

I’d like to call bull on that tactic. Using Big Bird as a symbol of PBS’s value is disingenuous and obscures the legitimate questions of (a) whether PBS is essential and (b) whether it should be federally funded.

I worked for PBS for more than six years, and have in fact spent most of my career working to raise the visibility and impact of public media online.

So, I’m in the pro-public-media camp.

But Big Bird is a red herring. He’s not an apt symbol of PBS, a network that is also home to Downton Abbey and the NewsHour, This Old House and, yes, doo-wop shows at pledge time (not to mention the infomercials for wrinkle cream that some stations air). PBS is a variety show and Big Bird only represents only one act.

We may need Big Bird, but do we need PBS? Do we need the variety show?

Ken Burns says yes. In a recent op-ed published in USA Today, titled Romney’s war on public TV is a loss for USA, he wrote:

“In an increasingly difficult world to navigate, with multiple media outlets and a constant onslaught of viewpoints, PBS remains our shared space, one where we can experience the best in arts and education, public affairs, history, science and journalism.

It is a place where we can all feel at home.”

I don’t think so. While PBS is definitely valued by millions of Americans, it’s a stretch to call it a shared space (for example, don’t people typically interact inside a shared space? otherwise, what makes it shared?). And the problem for PBS, trying to make its case to Congress and funders and the public, is that while it’s valued by millions of Americans, different people value it for different reasons. For some people, PBS is Big Bird, and more generally, a safe haven for children (I personally think PBS KIDS is a national treasure). For others, PBS is about cooking shows, investigative journalism like Frontline, Antiques Roadshow or independent film (think P.O.V. and Independent Lens). The aesthetic and audience and mission of PBS shows is all over the map, and it’s not clear, to me, what knits them together. What’s the common value proposition?

The collective value proposition of public media more generally, of course, is that it’s public. It’s non-commercial, treating viewers/listeners/users as citizens, not consumers. Yes, the underwriting spots on PBS and NPR today are often indistinguishable from commercials; and yes, there’s plain-old advertising on PBS.org. These are unfortunate developments, in my mind, but also understandable, as these enterprises struggle to stay competitive in a fast-changing media landscape, where users don’t expect less of them just because they have less money than their commercial counterparts.

I personally trust that the people who make content for public media generally do so because they are moved to educate, inspire, inform… to help people, and serve them, not to sell them something. If they’re selling anything, it’s ideas, and I trust that great care is taken to make sure a diverse array of ideas are on display. But I also know that there’s a lot of ego in public media — a lot of content producers and editors who think they know best. Many of them are superlative at what they do, and have Pulitzer awards and the like to prove it. And of course, it’s hard to do your job well if you think you stink at it. But ego can lead to insularity — over-confidence that the way you’re doing things is the only way, the best way. And then when your detractors call for your demise, you are more likely to be defensive than to consider anew what it is that truly defines your value.

When every year seems to bring a new round of threats to public media funding, it’s clear to me that public media isn’t doing a very good job of asserting its value. Maybe its detractors have more money and better lobbyists, but clearly, the “Save Big Bird” tactic is only a band-aid, and one that’s getting worn out from overuse. Collectively, public media has a huge megaphone, and a tremendous amount of intelligence, both about media-making and about meaningfully engaging the public in compelling and respectful ways. It’s time to harness these resources and facilitate an ongoing, online discussion about what public media should look like in 2012, whether it should be federally funded, and how it should best remain accountable to the public it serves.

To me, the strongest argument for federally funded public media is that Americans who can’t afford cable television and who don’t have internet access should be able to access quality news and information. (Of course, the government should also make sure everyone has internet access.) Sure, people may prefer to watch “The Biggest Loser,” but if they want trustworthy journalism, they should have it. Information is power, and if we want to call ourselves the greatest democracy in the world, we need to empower our citizens with information they can trust.

But as I’ve illustrated above, PBS isn’t just trustworthy news. It’s also British dramas, nature shows, cooking shows, pledge specials, and so much more. Is all of this content essential to democracy? That’s the million dollar question.

Who gets to decide what media the American public needs? The programming executives at PBS and NPR? The whims of private funders? (After all, a great documentary that programming execs want to air may never get the funding it needs, and may never see the light of day.)

And of course, the great strength and great weakness of public media lies in the fact that what you or I experience as “PBS” or “NPR” relies entirely on what our local station chooses to air. For example, P.O.V. is an incredible independent film series that PBS distributes; last time I checked, many stations air it at 11pm or later, in some cases because they’re afraid of the political ramifications of airing a show that addresses challenging social issues in often provocative ways. So if someone in Idaho argues to save or kill PBS, they’re arguing for something entirely different than someone who watches PBS in Florida, or Michigan, or New York.

Given the local/national structure of PBS and NPR, decision-making about public media programming is in fact very distributed — but that doesn’t necessarily make it democratic, or responsive to the public it serves. It just means that a lot of programming executives are making disparate decisions, without necessarily having accountability to their local communities.

The fact is, in 2012, media is nothing like it was in the 60s, when public broadcasting was founded. Back then, there were a few channels, and it made sense that there would be only a few gatekeepers. But today, anyone with internet access can be a media maker. The floodgates are open, so the role of the gatekeeper needs to evolve.

In 2012, the public media ecosystem is complex, comprising not just PBS but also NPR, local stations, independent producers — and, some would argue, public access channels, nonprofit news start-ups, citizen journalism and more. Today, anyone can be a media maker, launching a blog, podcast or Twitter feed. Executives in board rooms shouldn’t be the only ones with a say in what makes it to the airwaves — there should be more accountability, transparency and responsiveness in order for public media content to truly meet the needs of diverse Americans.

As Ken Burns pointed out, PBS represents something like 1/100th of 1 percent of the federal budget. Or, as astrophysicist Neil deGrasse Tyson tweeted (and was retweeted 62,000+ times):

Cutting PBS support (0.012% of budget) to help balance the Federal budget is like deleting text files to make room on your 500Gig hard drive

Cutting PBS is not a smart or meaningful way to improve the economic outlook of this country. But that doesn’t mean the government should necessarily fund PBS. Just because something is affordable doesn’t mean it’s necessary.

What do you think? Is PBS essential — so much so that it warrants federal funding? More generally, do you think it makes sense for government to fund media in an age when anyone can be a media maker, by writing a blog, for example, or creating a YouTube video on their phone?

Amanda Hirsch is a writer, performer and social media consultant; she is also the editor of Collaboration Central. The former editorial director of PBS.org, lives in Brooklyn, NY and blogs at amandahirsch.com. Amanda spends way too much time on Twitter.