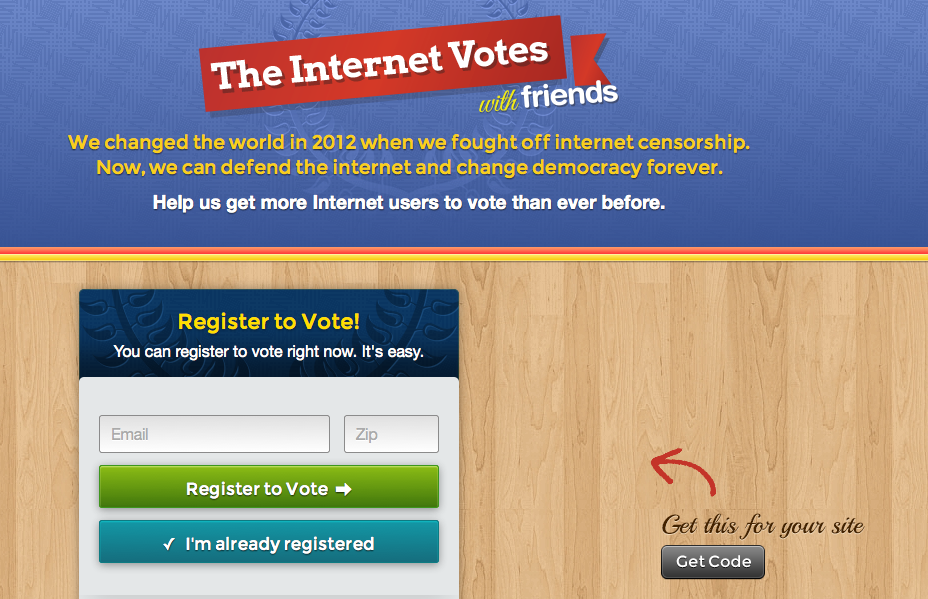 "The Internet Votes" project hopes to get pledges to vote from at least 1 million members online.

We’ve been hearing a lot lately about alleged attempts to suppress voter turnout, as so-called “Voter ID” laws introduce new obstacles to voting that may thwart turnout (primarily among college students, minorities, and senior citizens). Amid this backdrop, and with the election just a month away, two advocacy groups have joined together to launch “The Internet Votes” initiative, seeking to tap into the power of social media to get out the vote.

The two groups, Personal Democracy Media and Fight for the Future, are emboldened by recent research showing the political impact of social media. A report issued last month by the Pew Internet and American Life project found that more than a third of the people on social networking sites such as Facebook say the sites are important to them “in keeping up with political news.”

The Internet has helped organize and open up such a vast wealth of information ... without the domination of gate keepers like the mainstream media." -Andrew Rasiej

James Fowler, a political scientist at UC San Diego, conducted an experiment that showed people who were exposed to reminders to vote on Facebook were more likely to vote in the 2010 midterm elections. And the recent online protests of SOPA and PIPA proposals are being used as a case study of how online political influence can have an offline political impact.

For Election Day 2012, The Internet Votes project seeks to get pledges to vote from at least 1 million members of what it’s calling “The Internet Public.” I recently caught up with Andrew Rasiej, the founder of Personal Democracy Forum, to discuss his initiative. First, I wanted to know what qualifies someone as a member of this “Internet Public.” Rasiej explained that this was a term coined by Dave Parry, a University of Texas professor, who was referring to “what happened when (Egypt’s ex-President Hosni) Mubarak shut off the Internet in Egypt and it just made the protests bigger and louder.” Rasiej says he “fashioned the term to mean any person who self-identifies with the Internet and for whom it is central to their lives, either economically, emotionally, or spiritually.”

This constituency may be growing, especially when it comes to political news. As mentioned above, a significant number of Americans get political news from social networking sites. At the same time, Gallup just announced that distrust in traditional media has hit a new high, with 60 percent of Americans saying they “have little or no trust in the mass media to report the news fully, accurately, and fairly.” Rasiej insists that the Internet will continue to gain influence as a source of political news, telling me the “Internet has helped organize and open up such a vast wealth of information … without the domination of gate keepers like the mainstream media.”

One example that comes to mind that illustrates Rasiej’s point is the new Google Civic Information API, which provides web developers with information like polling places, candidate data, early polling locations, etc. PollWatchUSA, a mobile app that will provide crowd-sourced data on polling problems to election officials, is just one innovative use of this type of information.

The Internet Votes project has developed a web and Facebook app called “VoteWithFriends” that encourages members of one’s online social network to register to vote. According to Tiffiny Cheng, the project’s co-founder, “Registering to vote should be simple. By working with websites across the country, Internet users will be able to register to vote today as they surf the web without having to search for a form.” As someone who, following a recent move, had to scour the web for several forms to complete and snail-mail to my secretary of state’s office, I couldn’t agree more with Cheng.

Will We Ever Vote Online?

But why stop at merely using the Internet to register to vote? In an age when multimillion-dollar transactions can be securely conducted online, and private medical records discreetly kept online, why do we still confront long lines at polling places and rainy weather to vote? That is, why don’t we vote online? I posed this to Rasiej, who agreed that we could be voting online (if we could ensure a paper trail for audits and recounts). But he one-upped me when he suggested that Congress should vote online from their homes.

“Not only would it cause K Street to shudder, it would allow representatives to spend more time in their districts with constituents than flying back and forth every week,” he said. More than this, by allowing them to vote from virtually anywhere, it might give our elected officials little excuse for not “showing up” to vote.

In the meantime, The Internet Votes initiative is hoping that, by registering people to vote online and reminding us to visit the polls on Election Day, it’s taking away our excuses for not showing up to vote.

Photo of Andrew Rasiej by Mohamed Nanabhay on Flickr and used here with Creative Commons license.