Why We Need a Technology Sabbath 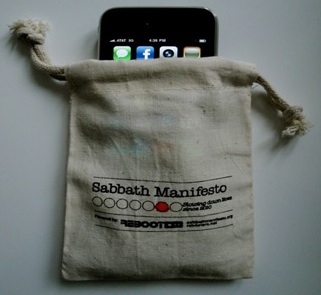 I only have to look at my 3-year-old to see the impact of my use of technology. He walks around the house saying, “Where’s my iPhone? I have a call in a minute.” And he has two toy phones he carries around in his pockets in case an “important call” comes in. I know all too well whom he is modeling.

That’s one reason why I’m passionate about the National Day of Unplugging and am working with Reboot, the non-profit organization, to help people carve some tech downtime into their lives as a weekly ritual.

When I do free myself from it, it's like the noise falls away. And that is what unplugging is all about."
ADVERTISEMENT
Click to read the entire series

The National Day of Unplugging highlights a web-based project called the Sabbath Manifesto, a reinterpretation of the Jewish Sabbath by Reboot’s network of artists, writers, journalists and filmmakers. It puts in practice “Avoid Technology,” the first of Ten Principles that are the core of the Sabbath Manifesto.

The Ten Principles start with: Avoid Technology; Connect With Loved Ones; Nurture Your Health; Get Outside; Avoid Commerce; Light Candles; Drink Wine; Eat Bread; Find Silence; Give Back.

Since I’ve started being more mindful of my technology use, I’ve found that I am able to better focus on my family, my friends and even my work without the distraction of the incessant buzzing and beeping of my phone or computer.

But, it definitely isn’t easy to let go.

I reach for my phone when it isn’t on me. I want to press its buttons, to see what has come over in a text, an email, on Facebook or even the latest news in the New York Times.

But when I do free myself from it, it’s like the noise falls away. And that is what unplugging is all about.

If you just walk down the street, it seems hard to imagine that the generations before us survived without cell phones, let alone smartphones. Everywhere you go, on sidewalks, in crosswalks and in cars, at dinner parties and in restaurants and cafes, in work meetings, at the gym and at playgrounds, people are engrossed in their phones, talking, emailing, texting, “checking in,” and tweeting and Facebooking the moment.

But these people are missing the real moment. They are so engaged with their phones that they are missing out on important time with their families, friends, and the community. When one of my Facebook friends posted that she was in line for ice cream and the kids were driving her crazy, my first thought was that if she were paying attention to them instead of Facebooking, they probably wouldn’t be acting out. My kids go bonkers when I start saying, “Uh huh, uh huh” because I have my nose buried in my phone. They know it is a free pass. But they also hate it because they know I’m not paying attention when they are talking.

The National Day of Unplugging isn’t draconian, and it is in no way an anti-technology movement. In fact, Dan Rollman, the founder of the project, along with Reboot, relies on technology for his livelihood through RecordSetter.com, an online database of world records.

It is just a suggestion that people pause to consider the impact of technology on their lives by taking a respite from technology for 24 hours to recharge themselves. Shutting off technology allows people the time to realize what they are missing when they are Facebooking, tweeting, texting and emailing.

Reboot, which seeks to reinvigorate Jewish traditions and cultures to make them relevant for a new generation, developed the annual tech detox to encourage young, hyper-connected, and frequently frantic people to take a respite from all things digital.

That tradition of a day of rest has been lost in today’s fast-paced society and is foreign to a generation that does not follow the religious traditions of those who came before it. But never has it been needed more. And the goal of the National Day of Unplugging is to encourage a healthy and balanced lifestyle for all people regardless of background. We believe that everyone needs a day of rest.

Aside from being disconnected from the people around them, people are even missing out on moments of personal thought and reflection. Who takes the time to daydream or to just sit alone doing nothing anymore? The phone is always a ready companion. In an era when the New York Times reports that it has become socially acceptable to text someone while speaking face-to-face with someone else, there is a problem.

The technology impulse is apparently even more urgent than the call of nature. The marketing firm 11Mark recently found that three-fourths of those surveyed use their phones in the bathroom, with 41 percent going beyond just texting and emailing to initiate phone calls.

No wonder the National Day of Unplugging has resonated with so many people around the world, from Mumbai to London to Brazil. People are tired of the relentless deluge of technology. They’re anxious about being expected to be reachable at any time and anywhere. People from Ashton Kutcher to former Prime Minister Gordon Brown’s wife Susan Brown, wrote on Twitter about the National Day of Unplugging this year.

“Our ancestors wrote their tweets on rocks and threw them at each other’s heads. Can we not do the same? LET’S UNPLUG!,” tweeted Rebooter Damon Lindelof, writer of the new movie “Prometheus” and the hit TV show “Lost.”

Dan Fost, a freelance writer and author of “Giants Past and Present,” a book about San Francisco’s baseball team, participated in the National Day of Unplugging and tries to go tech-free most weekends.

“Even though I find it hard to unplug, and I get all jittery wanting to check my phone for email, I find it ultimately quite liberating and relaxing to turn it off,” he said. “Not only do I find that I don’t miss anything important, but I also find I pay attention to a lot of things that are vitally important — primarily my immediate family and friends, but also things like my garden, or cooking, or exercise or the satisfaction of a walk in the woods. Each unplugging experience leads invariably to another.”

Dr. Hilarie Cash, co-founder of the ReSTART camp for Internet addicts in Fall City, Wash., said it is an urgent problem.

“It is like everybody is missing out,” she said. “You start withdrawing from your real relationships. Even if you do go out with people and are having dinner but you are texting and emailing, the quality of your social interaction is poor. You are multitasking and not paying attention.“

So give it a try. Start small. Put your phone on a shelf when you get home from work. Try to check your email only in the morning and at night on non-work days. Stack your cell phones in the middle of the table to be untouched during your next dinner. Go on a walk with the kids without your phone.

Tanya Schevitz is national communications manager for Reboot, an incubator of Jewish arts and culture. She spent 16 years as a newspaper reporter, including 12 years at the San Francisco Chronicle, where she covered higher education.